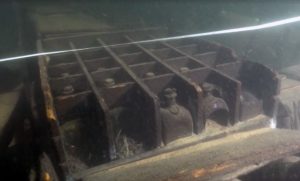 Glass bottles are among the first artefacts to have been raised by Russian scuba divers from an enigmatic 18th-century shipwreck discovered in the Baltic Sea two years ago.

Specialists from the Underwater Research Centre of the Russian Geographical Society (RGS) are studying the finds, recovered from what they believe to have been a Dutch ship sailing to what was then the new capital city of St Petersburg.

The wreck is code-named Butilochnik after the hundreds of bottles found aboard and thought to have contained alcohol.

The wreck-site was located by chance by a Russian Baltic Fleet vessel. It lies at a depth of 50m near Moshchny Island in the Gulf of Finland, 75 miles west of St Petersburg,

RGS divers carried out an initial survey in 2019 and found that the ship’s timbers had survived in the cold Baltic conditions, although there was no sign of masts. The vessel was believed to be a tjalk, a Dutch merchant sailing ship, and to have sunk around the middle of the 18th century.

A detailed study is now under way, with divers finding hundreds of glass bottles of various shapes and sizes, some factory-manufactured and others hand-made. Most were broken, but it is thought that they could have contained gin or other spirits.

“Most likely the ship was sailing to St Petersburg and was carrying bottles of alcohol on board, but what exactly was in the bottles is difficult to say, because now there is just a rotten substance,” reported RGS underwater archaeologist Roman Prokhorov. “Several bottles smell of pine-needles, eucalyptus.”

Juniper, the prime botanical used in gin, smells like pine and eucalyptus can be used as an ingredient. Dutch gin, or jenever, was exported from the Netherlands in large quantities in the 18th century.

Russia is more usually associated with vodka, a word first found in official documents at around the time of the Butilochnik’s sinking.

The RGS says that so far no record of such a vessel has been found in official archives.