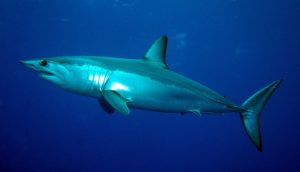 As the UK leaves the European Union, it finally gains the ability to stop trading in shark fins, says Shark Guardian. The conservation campaigners are calling on scuba divers, snorkellers and others concerned about the issue to sign and share its Finspire Change UK petition – before it closes next week.

Some 70,000 people have already signed over the past six months but 100,000 signatures are required for the petition to be considered for debate in Parliament. This one runs out of time on Friday, 11 September, so Shark Guardian is calling for a final push to get it over the line.

At present importing and exporting shark fins remains legal in the UK. Under EU law an individual can also bring in 20kg of shark fin “for personal consumption” (as compared to just 2kg of baby food or milk).

The UK is among the 25 nations held most responsible for exporting shark fin to the markets of Asia. It has exported more than 50 tonnes in the past three years alone, says Shark Guardian.

“Having left the EU, the UK can champion conservation measures much more forcefully,” the Department for Environment, Food & Rural Affairs (DEFRA) has agreed.”

In an initial response to the petition issued on 29 June, it insisted that the UK had a strong track record in marine conservation and was committed to the “appropriate” protection and management of all shark species.

“The UK Government is strongly opposed to shark-finning,” it claimed, having banned the act of finning and enforced a “Fins Naturally Attached” policy to combat illegal finning.

It went on to say that while it did not oppose sustainable shark-fishing, it considered failure to use the whole of any caught animal wasteful.

“We continue to push for stronger controls in order to reduce the risk of illegal finning,” it stated.

“The greatest conservation benefit for sharks will come through controls directed at the activities of the fishing vessels operating on the high seas rather than restrictions on the trade itself… the UK continues to press for stronger international controls within the Regional Fisheries Management Organisations (RFMOs), the Convention on International Trade in Endangered Species of Wild Fauna & Flora (CITES), the Convention on Migratory Species (CMS) and the associated Sharks MoU.”

Referring to the personal allowance for importing shark fin, DEFRA pointed out that Brexit allowed it to consider tightening this allowance and improving the traceability of the shark-fin trade in the UK.

Shark Guardian, a registered charity since 2013, says that it supports shark and marine conservation worldwide through education programmes, research projects and diving expeditions. Among its activities it runs a Shark Guardian Diver Programme to educate divers and snorkellers on how to help with research according to codes of conduct.

The petition can be found here.