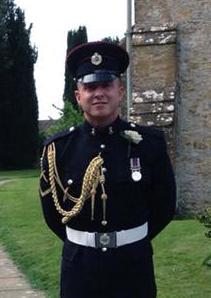 The Health & Safety Executive has censured the Ministry of Defence for the death of a military diver who ran out of gas while training at the National Diving & Activity Centre inland site two years ago.

The HSE issued two “Crown Censures”, which is how it formally records that a government body has failed to comply with health & safety legislation, and would likely have been convicted if it did not enjoy Crown immunity. This is the maximum sanction it can impose, and by accepting the censures the MoD has admitted its breach of duty.

The death of Lance Corporal George Partridge on 26 March, 2018 was reported on Divernet.  The 27-year-old soldier was on the seventh of a seven-week Army Diver Class 2 training course at the NDAC at Tidenham in Gloucestershire.

He and his dive-buddy had been ordered to attach a distance-line from the base of a shotline to the deeper of the site’s two Wessex helicopter wrecks, at 27m. But LCpl Partridge had to be recovered to the surface after he stopped responding to lifeline signals.

CPR was carried out before he was pronounced dead. His cylinders were found to be empty.

Sudden cardiac death syndrome was blamed for his death following a post mortem examination, which concluded that LCpl Partridge, who had been declared “fittest recruit” during his basic training, had an undiagnosed minor heart defect. But at the original pre-inquest review his family had blamed his death on “systematic failures”.

A Royal Navy service inquiry panel later published a detailed report in which it stated that he had been using faulty diving equipment. It criticised the course and made 53 recommendations on remedial action.

The HSE served the MoD with two Crown Improvement Notices, relating to failure to train all army divers in how to calculate air endurance, and failure to assess the risk of a diver running out of air.

LCpl Partridge had been serving with 26 Engineer Regiment in Perham Down, Wiltshire. He had been in the Army for eight years, including a tour of duty in Afghanistan in 2012, and was married, expecting his first child and set to be promoted to Corporal.

“This was a tragedy for all concerned,” said HSE inspector and diving specialist Julian Tuvey.

“However, just like any other employer, the MoD has a responsibility to reduce dangers to its personnel, as far as it properly can. The scenario of a diver running out of air is a very real risk that needs to be managed.”