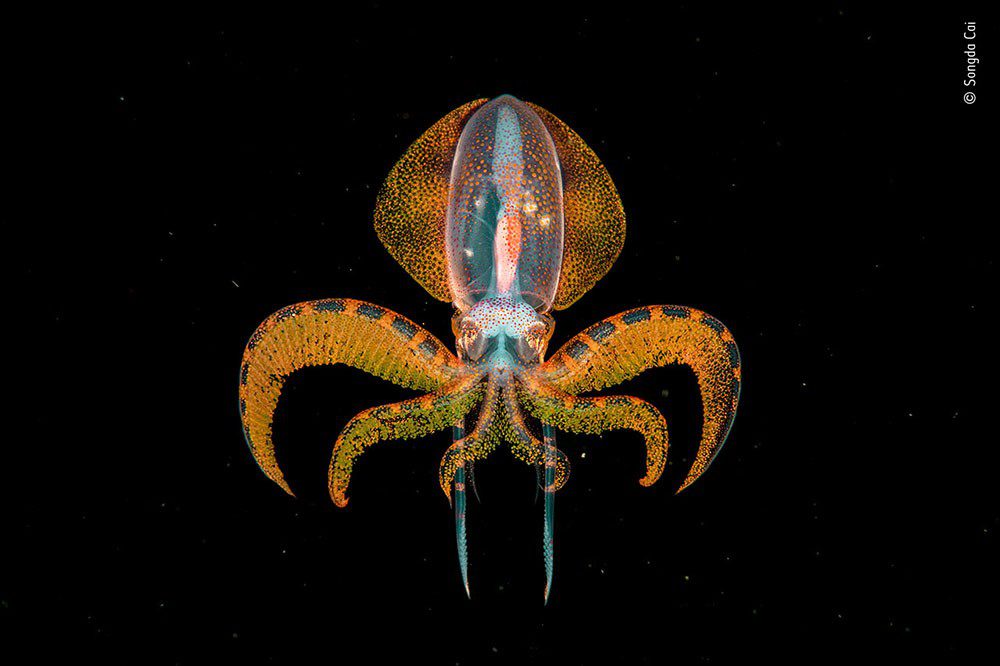 Chinese underwater photographer Songda Cai’s image “The Golden Moment” has won in the Underwater category of the Wildlife Photographer of the Year 2020 competition. It is one of the 16 winners selected from more than 49,000 entries from around the world.

The winners were revealed during an online awards ceremony livestreamed from the Natural History Museum (NHM) in London last night (13 October). The NHM developed and produces the prestigious annual competition.

The winning blackwater night-dive image shows a tiny diamondback squid paralarva stop hunting for an instant when caught in Songda’s light beam. “From above, Songda captured the fleeting moment when, hovering in perfect symmetry, the diamondback paralarva turned to gold,” said the jury.

The photographer was diving in deep water far off the coast of Anilao in the Philippines where, each November, hundreds of the diamondback squid gather to spawn. He used a Nikon D850 camera with 60mm f2.8 lens in a Seacam housing with Seaflash 150D strobes and Scubalamp lights, set to 1/200th sec @ f/20, ISO 500.

The other underwater photograph among the 16 winners was taken by Sam Sloss (Italy/USA) and topped the 11-14-years-old category. On a diving holiday in Indonesia’s North Sulawesi he had been watching the behaviour of a group of clownfish in their magnificent anemone home, and had been intrigued by the expression of one that kept its mouth open.

Rather than following the flitting fish in his viewfinder, Sam positioned himself where he knew that it would swim back into the frame. It was only on downloading his photos that he saw the tiny eyes inside the fish’s mouth and realised that they belonged to a “tongue-eating louse”.

The parasitic isopod had swum in through the fish’s gills as a male, changed sex, grown legs and attached itself to the base of its tongue, sucking its blood and replacing the tongue as it withered and dropped off. Though an isopod’s presence can weaken its host, the clownfish could still feed. 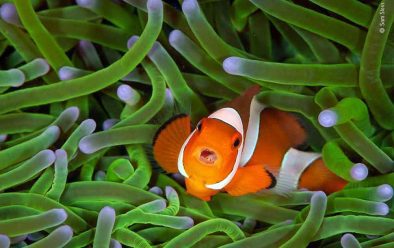 WPY entries are judged anonymously by a panel of experts on the basis of their innovation, narrative and technical ability. The competition is open to professional and amateur photographers of all ages and abilities.

The 100 shortlisted images from which the winners were chosen will now be showcased in lightbox displays at the annual exhibition which opens at the NHM this Friday (16 October) and continues until 6 June next year. It later goes on tour across the UK and to venues in Australia, Canada, Denmark, Germany and elsewhere.

“Limited visitor numbers and the museum’s safety measures will ensure visitors enjoy a safe and welcoming experience, contemplating the images in a crowd-free gallery,” promises the NHM, while stressing that tickets must be booked in advance. The museum returns to its normal opening hours of 10am – 5.50pm every day from next week.

The 57th WPY competition opens for entries on Monday (19 October), including new categories focusing on humans’ impact on the planet. Up to 10 December photographers can enter up to 25 images for a £30 fee (£35 in the final submission week), but those aged 17 or under can enter up to 10 images for free.