Mining a Forgotten Past in Cornwall

Mining a Forgotten Past
in Cornwall

BEN DUNSTAN is carving a niche in the West Country, where he and his team explore old mine-workings – and get very wet in the process. But you really need to know what you’re doing… 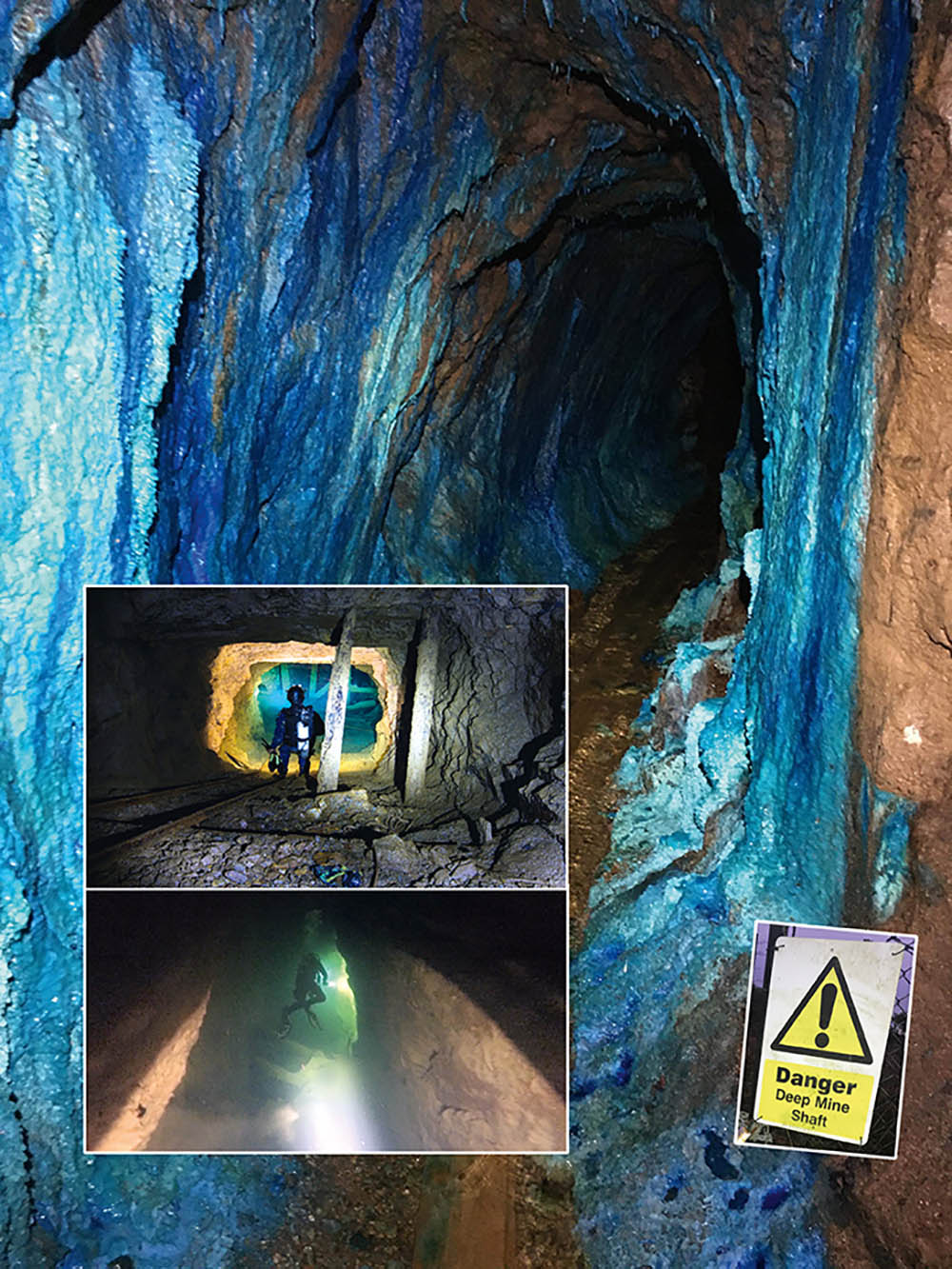 Tunnel leading deep into a copper mine. Insets from top: Diver looking down a flooded inclined railway shaft; exploring deeper into a mine.

Descending into the darkness below, our eyes slowly adjust to our surroundings. We follow the smooth rock face until the pile of roughly broken rocks comes into view in the mine-shaft’s sump. 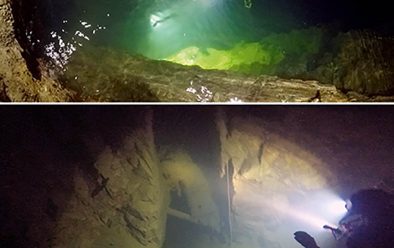 Top: Leaving the surface pool in a flooded mineshaft. Above: bottom of a mine-shaft looking into the workings.

I check my contents gauge and depth before getting ready to set up the guidelines to explore further. I can see as far as my torch allows with crystal clarity, but all around is blackness.

The reassuring steady light above my right shoulder confirms that my buddy is still following, and all is well with him.

Old miners speak about the darkness deep underground – how it is as black as you can get when your light goes out, and that’s before even reaching the water.

Even on open-water dives I have done to 70 or 80m there has always been a small amount of ambient light, but not down here. My two head-torches illuminate the area ahead, while my hands do the work of setting up lines for today’s exploration of a new area.

Those of us who live in Cornwall are surrounded by fantastic coastline, rich in dive-sites including many wrecks – but the diving is almost totally dependent on the weather.

Aside from scuba I have always had an interest in local mining history, and the abandoned mine-workings that litter the Cornish countryside.

Mining here has existed from the early Bronze Age, around 2150 BC, with Cornwall and Devon providing most of the UK’s tin, copper and arsenic right up to the 20th century. Originally it came from alluvial deposits in stream-beds and later it was mined underground.

Accessing these involves abseiling into workings in which only a small amount of the total space is explorable above the water table. Most of these have now been documented by caving groups.

Many of these mines are situated on private farmland, so permission is sought where required to gain access. More often than not, mine-workings are on land that’s council-owned or public, where access underground is often known about and, if not encouraged, at least tolerated. 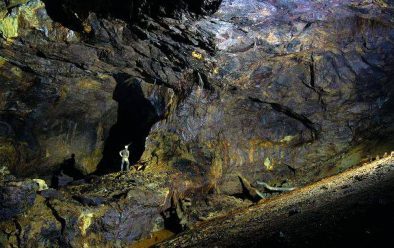 One of the larger open workings still accessible in a Cornish mine above the water-table.

It’s been more than 10 years since I first took a dip in a flooded mine. After fully exploring the dry sections, a climb down to the bottom revealed a blue pool of that clear water. More than anything, that first dip was to learn how deep the shaft went.

I had decided that I wouldn’t venture away from the main dropline, and would take along only a small single cylinder.

I dropped to more than 20m to find myself in a large underwater chamber with multiple tunnels. This gave me the urge to return with trusted company and better equipment, so that I could push further.

Since then I have trained as a commercial diver, and met many like-minded people who like to dive for fun at the weekends as well as for work.

None of us was formally trained as a cave-diver but we shared similar qualities essential for survival: all very comfortable in the water, used to diving in the full range of visibility and calm under pressure, with experience of difficult locations or restricted-access situations.

We read books on cave-diving and made multiple trips into the Dinas silica mine in South Wales with twin-sets as preparation. There we brushed up on our line-laying and emergency drills, and felt ready to see what else was down in the Cornish mines.

During the more settled months of the year I had started getting into wreck-diving seriously. But every winter, after the boat had been put away, we would find ourselves drawn deep underground, seeking out unexplored mines and workings. These forays would often end with us just staring at a pool of clear water with features just visible below, enticing us in.

In flooded caves or mine-workings there is no current to worry about, weather is rarely an issue and most locations offer excellent visibility. 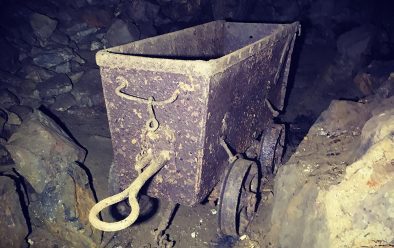 An old mine-cart, still on the rails as it was left.

This type of diving is not to be taken lightly – or done on a whim simply when it’s too rough to dive in the sea. Once a diver has left the main access shaft he can’t just swim up in an emergency, and might need to cover a considerable distance horizontally to reach an exit-point.

So we always carry multiple lights, plan our air and gas reserves using the rule of thirds, and use twin-sets where possible.

We mark exit-points well, using a shot in the main access-shaft with strobes, and use lines and markers even in good visibility, to ensure that we can always find our way back out.

Most of the mines are those in which we have already explored the topside workings, and can be sure of having reasonable access and clear water.

We take several team-members along to help with kit and to be on hand should an emergency occur. This deep underground, I wouldn’t dive with anyone I don’t know well or haven’t dived with much. It’s all about teamwork and trust.

We’ve discovered some pretty amazing artefacts and sights. Many of the mines had been closed suddenly, and once the pumps were stopped the rising water didn’t take long to reach its natural level.

Many tools and personal items were left in situ and remain there now. Usually we’re the first people to see them again.

Wooden shaft-linings, ladderways, wooden boxes, mine-carts and small tools still lie where they were dropped as much as 200 years ago, with no tide or storm action to move them. 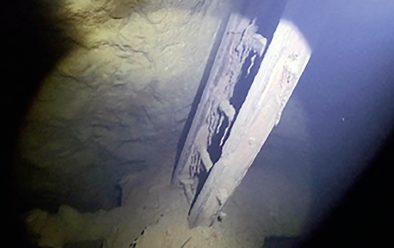 ‘Rusticle’-type protrusions on the rungs of a submerged ladder 25m down at the base of a flooded shaft.

Recently we came across a flooded shaft that still had its man-way ladders in place. The wooden sides were in perfect order, and the metal rungs had sprouted long rusticle-type protrusions, reminding me of ROV images I’ve seen taken miles below the Atlantic on the Titanic.

Future projects include other mines with local history that have never been dived. We have done many of the easy-to-access sites but a few older ones will require a lot of effort to reach the flooded sections. These could hold the most interesting underwater discoveries yet.

Catch up with Ben and his team’s diving adventures on his channel: youtube.com/c/BenoCam