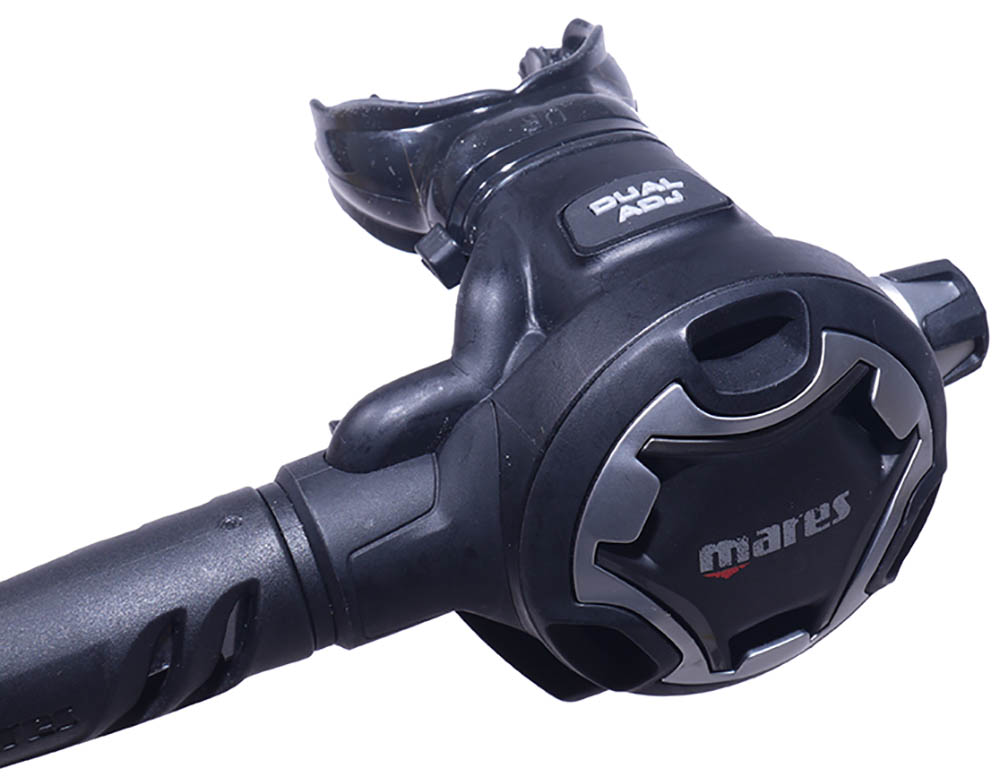 We’re used to electronic technology getting ever cheaper, even as it delivers not only bells and whistles but the whole damn Philharmonic Orchestra.

About the only thing a budget dive-computer doesn’t do yet is play Paul McCartney’s 3min 57sec hit Coming Up during your safety stop. But, in real terms, mechanical engineering has grown more expensive.

This is especially true of regulators, the manufacturing bases of which remain largely in the West, rather than the Far East.

In 2020, an equivalent recreational regulator from a major brand can easily nudge £600.

So at £332, the Mares Dual Adjustable second stage and 52X first stage combo is very much a budget regulator. But is it really a starter or an entry-level model?

As Mike Ward has mentioned before, regulator performance is now so good that such terms are misleading.

While we should expect to get what we pay for, even a budget valve is not going to leave most recreational divers gasping for breath, or feeling short-changed for features and benefits.

In the Dual Adjustable 52X there’s a lot to like, something to which I’m becoming accustomed, having tested three other Mares regs spanning low to premium pricing.

The 52X first stage is a balanced-diaphragm design, an approach favoured by Mares for more than four decades.

It is synonymous with easy breathing under high demand, even at depth and at low tank pressures. It’s also mechanically easy to isolate the working parts from the surrounding water, reducing the risk of icing and damage from contaminants such as silt.

There are two high-pressure ports for mounting pressure-gauges or computer transmitters on either side of the first stage to help with hose management, and four medium-pressure ports. 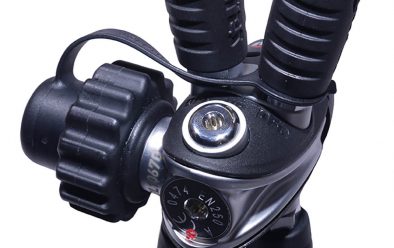 Two of these are set on the right, fed by a system Mares calls Dynamic Flow Control.

DFC harnesses air-flow physics to help send the lion’s share of air through these two ports with minimal inhalation effort on your or your buddy’s part.

When you’re not breathing in, air pressure inside the second stage builds up enough to close the valve against incoming pressure from the first stage trying to force it open.

Both second-stage and first-stage pressure are in balance.

When we inhale, pressure in the second stage drops below that in the first stage and is strong enough to open the second-stage valve, so air flows freely into our lungs.

Well, not quite freely – you might have to exert some effort to keep the valve open.

The dilemma for the manufacturer is how to keep this effort to an absolute minimum. DFC creates a slight vacuum in the first-stage air-flow, so the air behind is dragged along by the air already moving ahead in front.

The easiest analogy is a train passing through a tunnel – you can feel the air being dragged behind it.

This venturi effect reduces the mp drop as you inhale and minimises the lung-power needed to sustain air-flow from the first to the second stage, easing inhalation.

Some Mares first stages offer DFC routeing to all the mp ports but will cost more. The biggest demand for air during recreational dives is likely to be in an emergency at depth with two divers breathing heavily from one first stage using an octopus, with tank pressure rapidly falling, so primary and safe seconds should be connected to the DFC outlets.

The lower-performance ports can be used for direct feeds, where there’s much less demand for high flow-rates and high volumes of air.

Using two DFC ports does restrict your choice of hose layout if you want to be assured of the best possible breathing performance – which I would!

Mares expects you to run not just your primary second stage but also your safe second from the right. This is my preference but it’s a contested view.

The 52X is EN250A certified. One of the tests it passed is for coldwater diving.

For EN purposes, cold water is defined as below 10°C – easily found in UK waters.

To earn the rating, it is tested and certified for use at 4°C.

Water doesn’t freeze at these temperatures, so why the fuss?

As air passes from your cylinder to your lungs, it drops in pressure, causing it to cool. It also cools according to the volume of gas flowing through the regulator, associated with working hard, sharing and diving deep.

Fast-flowing air, caused by rapid breathing, also cools faster than slower-moving air. Because of these factors, air temperature inside the regulator can be tens of degrees colder than the surrounding water.

This super-cooling can cause water in contact with the reg to turn to ice that can block the travel of moving parts and cause a first stage to freeflow, or even shut off the air supply.

Time is also a factor. The EN250 coldwater standard requires only that the regulator does not freeze within five minutes, but this is at a depth of 50m under a fairly high flow-rate.

The 52X protects itself from the cold partly by using an enlarged surface area around the first stage to increase its efficiency as a heat-exchanger. An additional coldwater kit, which dry-seals the exposed diaphragm spring, is optional for even more extreme conditions.

The 52X can be ordered with yoke, 300-bar DIN and nitrox DIN connectors. It is compatible with 40% nitrox mixes out of the box, so the nitrox connector is a bit of a red herring for recreational diving.

It’s an EU standard, designed to avoid accidentally connecting a reg to a nitrox-filled cylinder without realising. I use nitrox a lot overseas and I don’t think many dive-centres or liveaboards have tanks to use with the nitrox connection, so you don’t need it.

If you drop the 52X in the rinse-tank without its dust cap, its Auto Sealing Technology keeps the water out.

The Dual Adjustable second stage links to the first stage with a Superflex hose. This offers less restriction than conventional hoses under load, allowing you to turn your head more easily and to be able to coil up the set more tightly for easier transport and storage.

It is pneumatically balanced, a benefit once found only on premium models.

Air-balancing reduces the lung effort invested whenever you inhale to crack the second-stage valve and get the air flowing.

The valve is kept closed by a spring. Its strength can’t be varied, even though it must cope with variations in pressure coming from the first stage as your diving depth changes, so it is often stronger than it needs to be, requiring more effort to crack the valve than is ideal. 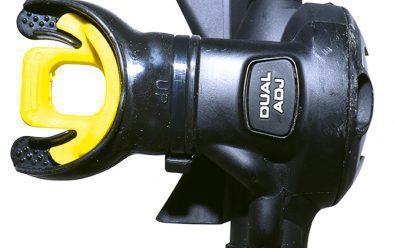 In a balanced design, the spring is enclosed in an air-pocket. This air pressure automatically matches changes in depth, working with the spring to adjust cracking effort to the optimum setting for ease of breathing, regardless of depth.

Once cracked, the venturi takes over. Air is made to swirl through the second stage, causing a vacuum that does much of the work of holding down the diaphragm and keeping the second-stage valve open for you.

Its purpose is to minimise the amount of effort you have to make to keep the air flowing to your lungs. Mares’ patented venturi system is called Vortex Assisted Design.

The VAD’s air-routeing means that cooling takes place further away from the valve-seat than in other venturi designs.

Mares claims that this decreases the risk of ice forming on the seat and valve opening, which could freeze the mechanism.

A side control knob lets you detune ease of breathing by increasing the lung effort needed to crack the second-stage valve. It also reduces the assist provided by the venturi, so you have to work harder to keep the air flowing.

Detuning any regulator should never be done without good reason. It won’t prolong your air supply, because you’ll burn more oxygen extracting it than you’ll ever save.

It’s for rare situations that might cause the regulator to freeflow – possibly while facing into a very strong current.

The DIN model first stage supplied was easy to fit and remove with wet hands. The second stage is only slightly negatively buoyant and has a comfortable mouthpiece.

The purge requires a comparatively deep press but is easy to use with or without gloves. The exhaust T does an excellent job of diverting bubbles from your field of view.

Clearing a fully flooded mouthpiece, even upside-down, is easy, either using the purge or exhalation method, and the exhaust T won’t interfere with the seal on most masks. These points are relevant when sharing, in case the reg is accidentally inserted inverted.

Speaking of sharing, on our punishing 30m-deep octopus test there was no chance of outbreathing the Dual Adjustable 52X.

Dennis Santos and I hung onto a wreck and kicked as hard as we could to get our breathing rate up for two minutes, burning through around 500 litres.

The EN250 A suffix is awarded after an exhaustive machine breathing test, which can’t be matched objectively by a manned dive,

but our subjective test shows up breathing characteristics, such as how the inhalation feels, that a machine can’t assess. The Mares delivered each breath with minimal cracking effort and very smooth air-flow.

We tested with the primary and matched Dual Adjustable octopus coming off the two DFC ports, as recommended by Mares.

A regulator gaining the A suffix indicates only that it has met the standard. The Mares Dual Adjustable 52X probably exceeds EN250A if you use the non-DFC ports, which you might do if you wish to run your octopus or a combi safe second/BC inflator from the left.

Using the DFC ports should further increase your safety factor when sharing, so it’s no surprise that, for normal use, this regulator’s inhalation is easy and smooth.

Mares continues to impress. Although an inexpensive addition to its range, the Dual Adjustable 52X delivers all the features and benefits a serious advanced diver is likely to ask of any regulator.

In addition to scoring the EU’s top EN250A rating, it has also passed the Norwegian Norsak U-101 breathing standards at more than 200m using a helium mix. Highly recommended.