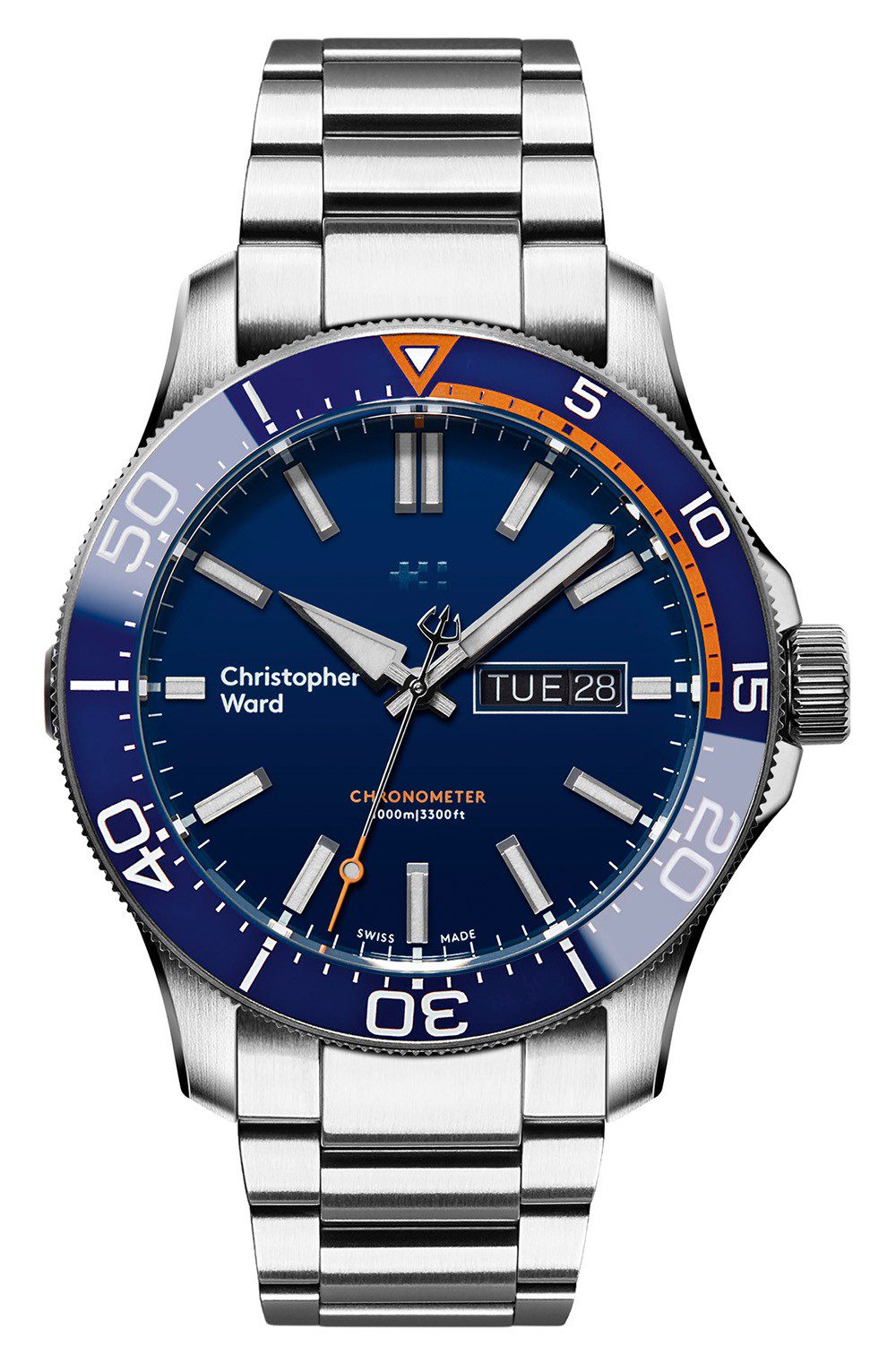 For my first two seasons of diving I used the then-new BSAC-88 tables. These came with a handy waterproof slate to tuck into a BC pocket, the idea being to plan the dive using the full set before dropping into the water with the slate so that the plan could be updated on the fly if things changed.

Which they usually did. Depth was monitored using the gauge on my instrument console; time was kept using a Casio diver’s watch.

It was a grand piece of kit, that Casio; inexpensive at £40, sturdy (it went through the washing machine in my undersuit pocket more than once), and with a strap long enough to go around a drysuit cuff. It did the job perfectly well.

True, the bezel had no one-way mechanism to stop it being accidentally altered to show a shorter time than I’d really completed, but that didn’t matter because it was hard enough to shift even when you wanted it to move.

The Casio was bargain-basement, but I’ve always been fiscally prudent.

The only flaw in the whole watch and depth-gauge scenario, apart from the restriction of adhering to a predefined plan, was user-error.

I would be so excited to be diving that I’d forget to reset the maximum-depth indicator on the depth-gauge between dives, and rarely remembered to alter the bezel on my watch on entry, so I never had more than a best-guess about depth and time. Which isn’t good.

All this ran through my mind in an instant when Christopher Ward asked me if I’d like to test its latest C60 Elite 1000 Titanium dive-watch.

A few days later a parcel arrived, marked Christopher Ward but a bit thin if it contained a watch.

It didn’t. It held the latest issue of the manufacturer’s magazine for watch-owners, Loupe.

Printed on luxurious heavyweight matt paper and with inspiring articles about butterflies and electric vehicles, it was a sign that Christopher Ward watches offer something different from my old Casio.

Then the watch arrived. If I have suggested in previous reviews that items of diving equipment ooze quality they haven’t, not compared with the C60 Elite 1000, which is gorgeous from the get-go. 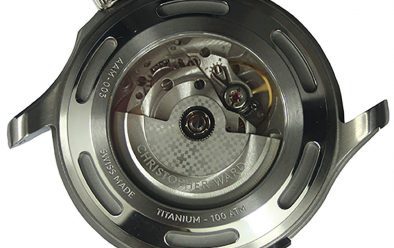 Reverse view with the mechanism on display, winding crown at the top.

A matt-black logo-embossed card sleeve slid off to uncover a beautifully crafted wood-and-leather inner box that opened like a long-thin drawer.

In the top of that was a warranty card, user-manual and another folded envelope with a soft fabric storage pouch inside and, beneath, nestling in the black cut-out interior of the box, the watch itself.

For the sort of wedge you’ll need to buy one of these, a little theatre is to be expected but the C60 Elite is a thing of beauty. Its polished titanium case has a 1000m depth-rating and houses a Sellita SW220 COSC movement designed to deliver chronometer standard timekeeping.

Turn the watch over and you can see the innards busily doing their thing through a clear window.

The face is a model of simplicity, always best in situations in which stress might be a factor, such as a dive-related manure/ fan-interface scenario. It is marked with simple divisions at five-minute intervals; no numbers, just a double marker at the hour position so you know which way up it is.

There is a short, fat, pointed hour hand and a longer oblong minute hand. Quite why I liked it so much I don’t know, but the second hand has a tiny trident at the non-reading end, perfect for a dive-watch. Hands and markers are luminous: Super-LumiNova Grade X1 GL C1 if you want to know. 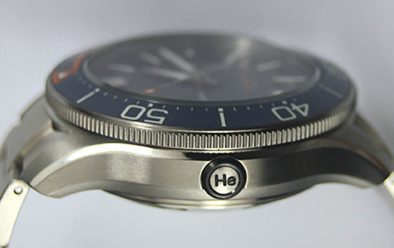 The helium valve on the side of the case.

A day and date window sits at the right of the face at the three o’clock position, beside the winding crown, which you unscrew, pull out and turn in various ways to make adjustments or wind. There’s an automatic helium release valve on the left of the case.

You shouldn’t need to wind the watch more than once if you wear it regularly because an auto-winding mechanism should keep it going.

Put the fully wound watch aside and it should run for 38 hours or so before stopping.

The bezel has large, easily read numbers clearly marked and turns only anti-clockwise, so if it does get moved it’ll suggest you’ve been in the water for longer than you actually have, for safety. It marks the first 15 minutes of your dive with an orange segment, then reverts to the same navy blue as the main watch face.

You can specify the watch in black with red highlights if you prefer.

The supplied bracelet was titanium, with a hinged clasp that had two reassuringly positive catches to stop it opening when not required.

The strap was a little large on my bare wrist, fitted well on a wet-glove or neoprene wrist-seal but was too small for a drysuit forearm.

Bracelet length is adjustable by adding or removing links, or you could opt for a colour-co-ordinated rubber/Cordura hybrid strap.

Or buy both straps and use the quick-release mechanism to switch according to the occasion.

I found the quick release very positive in use, if a touch fiddly.

The C60 Elite only has to do two things, keep good time and be easy to read. As a dive-watch the bezel has to move positively and stay put when set.

I set the time using the BBC pips. Christopher Ward claims timekeeping accuracy will be somewhere within –4 to +6 seconds per day, and 48 hours later I could report its claim to be fully justified. 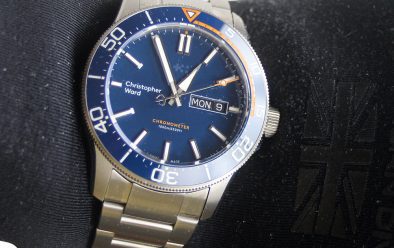 The C60 Elite sits nicely on a wet-glove wrist or the wrist-seal of a wetsuit.

As for ease of reading, the merest glance is all you need. I loved this watch’s simplicity.

The outer edge of the bezel is knurled just enough to be easily turned with bare or gloved hands, without being likely to catch and turn once set. The ratchet weight is equally well-chosen, enough to make setting the bezel positive but without making it hard to turn or easy to overshoot where you want it.

Christopher Ward makes much of what it says is the relatively light weight of the C60 for a titanium dive-watch, though it still felt both heavy and bulky to me. I don’t wear a wristwatch, so that might have something to do with it.

Under the cuff of a dress shirt it fitted nicely, so should you need to dress for dinner on your next liveaboard you won’t need to remove it.

Last year my other half and I cruised to Iceland with Cunard (great, after I’d got used to not jumping off the boat three or four times a day) and I overheard two guys discussing dive-watches outside an on-board jewellery shop.

Neither was a diver, but both apparently owned multiple diving watches, and both were considering spending four-figure sums on new ones to add to their collections.

Also last year, I used multiple dive-boats and visited a few inland sites, seeing thousands of divers, and not one had a diving watch on their arm. Divers today do not use watches when diving, even as back-up dive-timers.

Which means that in 2020 I don’t know how to definitively score the C60 Elite Titanium. It’s lovely to look at and hold and wear. It feels classy and it does what it’s supposed to do very well. It’s just that I no longer know anyone who wants to do what the C60 does in the water.

Does that matter? If you want a dive-watch, the C60 Elite is beautifully made, solid and desirable. I can’t imagine buyer’s remorse occurring post-purchase.

All I’d suggest is that Christopher Ward throw in a longer strap as standard, so that drysuit divers can use one, if they want to.

COLOUR> Navy blue with orange or black with red highlights