DIVER’s freediving consultant Marcus Greatwood had been trying to capture the spectacular image below for some time – eventually he succeeded, and it has won a commendation in the 2019 Underwater Photographer of the Year Awards 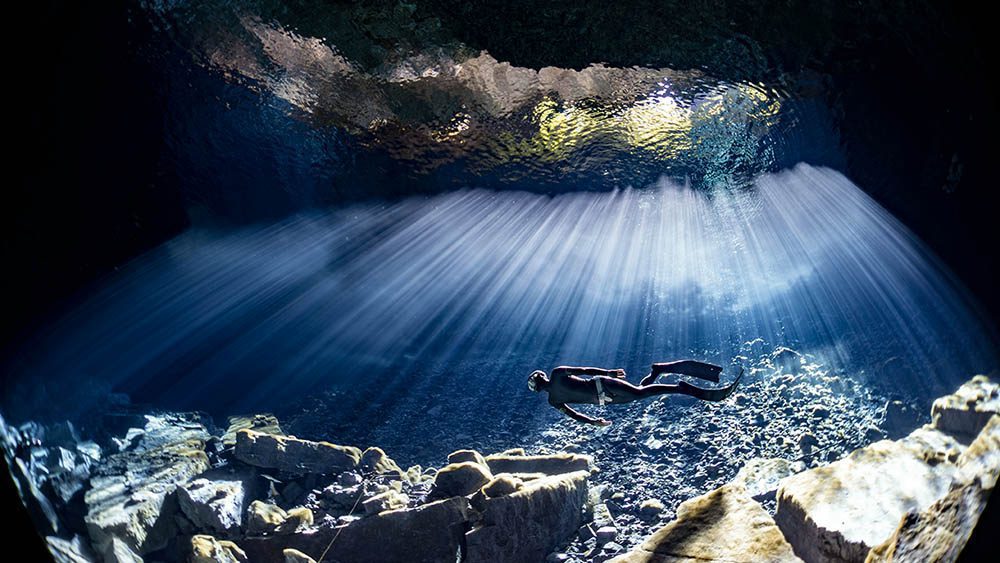 Marcus Greatwood and his NoTanx freediving team have been diving Kefalonia’s cenotes for several years, visiting the sites half a dozen times with permission from the Greek island’s authorities. “But there was a shot I’d been trying to get since our first visit, which was reported in DIVER back in 2015,” he tells us.

“I’d been trying to get (and missing) the sun at the right angle.

As this cave is at the bottom of a sinkhole, the sunlight glances over it only for about an hour at certain times of the year.”

Last September the team stayed for two days in the local village, specifically to get the shot. On the first day, they checked the sun’s angle at various times and decided that 11am could work. They also dropped stepping-stones around the edge of the lake to avoid stirring up the soft mud before the shoot.

the water. When we eventually entered from the edge of the small lake, the shards of light penetrating the crystal water took my breath away.

“I knew I’d get the shot and I got it in just three takes, with me inside the mouth of the cave – like Matt Longbottom, I was on breath-hold.

“The cold water combined with the amazing location literally took our breaths away, making each dive harder than the last.”