It takes confidence to call a dive, but perhaps we should all take more notice of the cave-diving approach to safety, suggests SIMON PRIDMORE 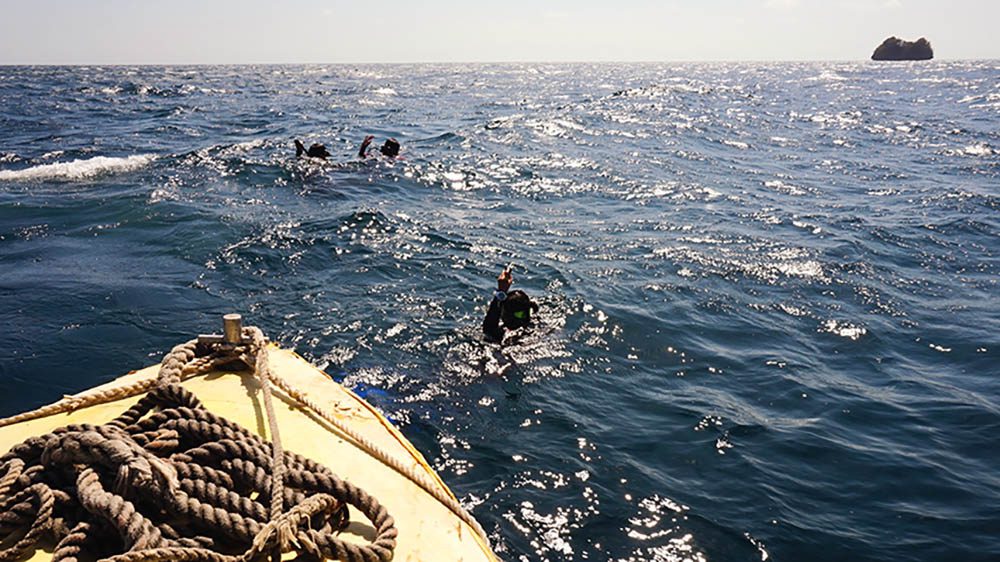 Divers descend in the late afternoon in the tropics. An hour later, they’re going to be hard to find.

Every diving incident has a chain of events that lead up to it but often the chain is visible only afterwards. You don’t always see a chain before an accident takes place, but if you do see one or if you only think you see one, you need to have the courage to break it – even if this leads to your being criticised by others in your dive-team.

Cave-divers have a rule that seeks to eliminate the fear of recrimination and saves lives.

This rule is that any diver can abort any dive at any time for any reason without having to explain themselves to anyone.

When one of your team gives the up signal (or turn signal in the case of cave-diving), the rest of the team acknowledges and complies immediately, no questions asked, either at the time or subsequently.

It doesn’t matter if the threat to safety is genuine or not. For example, a diver might abort a dive simply as a result of misreading his contents gauge.

The important thing is that if one member of the team believes there is a threat, then that belief in itself is enough to put the team at risk if it continues.

This is a principle that all dive-teams might consider applying to their diving, whether they dive in overhead environments or not.

Here is an example of an instance when I decided to break the chain even before the divers were in the water.

A few years ago, I was at my dive-centre in Guam with two students. We were preparing for the final dive in their trimix course when one of my divemasters arrived with the news that a diver we knew from another centre had died in the recompression chamber following an incident that had taken place the day before.

The students were nearby and overheard the conversation but said nothing. On the boat, they were quieter than usual and I was concentrating on keeping everything normal, following the pattern of their earlier training dives.

But the news of the diver’s death was preying on my mind. He was a friend and we had dived together plenty of times.

On arrival at the dive-site, I saw that a strong current was running and that it had carried the buoy, which was to be our ascent platform, under water. I noticed the students exchange a glance of concern.

I knew that the fact that they were undertaking a big dive would already be creating a certain level of anxiety, and that a strong current might lead to additional task-loading.

I also guessed that the news of the diver’s death might be a distracting factor for them, especially if they started to become stressed during the dive. I was also concerned at the impact the news might have on my own ability to concentrate.

I went over to where they were preparing and explained that I was cancelling the dive, citing all the reasons, including the doubts I had about my own state of mind.

I was expecting them to be upset and object to this change in plan, because they were due to fly out the following night and this cancellation would mean that they couldn’t complete the course on schedule.

But instead, they responded with smiles of absolute relief and thanked me. They managed to change their flights and a couple of days later we ran the final course dive. Everything went perfectly.

Who knows? Plan A might have turned out fine in the end but aborting the dive before any of us had even entered the water ensured that what had looked at the time like an accumulating series of problems didn’t end in disaster.

It is not always the case that you as a diver are in control of your group. Nevertheless, if you perceive what seems to be a chain of events that could lead to an accident, you can still act.

A few years ago, underwater photographer Tom back-rolled into the water with his dive-partner. They were part of a larger group of divers doing a fourth dive of the day in what looked like a shallow, sheltered bay.

There had been delays on the liveaboard dive-deck, which meant that they were diving later in the day than they normally would.

Given the need for the divers to get in the water quickly, while there was plenty of daylight remaining, the guides dispensed with their usual pre-dive current check.

As soon as Tom dropped in, he and the others quickly found that this had been a mistake. Under water, the bay was far from sheltered. As soon as they descended, the divers were whisked away by a strong current flowing at a rate of knots. They were flying across the seabed as if their fins were jet-propelled.

Tom assessed the situation quickly. He definitely was not going to get any photos in conditions like this.

Moreover, he judged that the divers were likely to get carried quite some distance by the fast current and, in an hour’s time at the end of the dive, in fading daylight, it might be very difficult for the tender-boat crews to spot them all on the surface in open sea.

He kicked over to the dive-guide and motioned to him that it might be a good idea to abort the dive.

The guide shook his head and indicated that he thought it was OK to continue. It was true, the other divers in the group seemed to be enjoying the wild ride.

Tom pointed to himself and his buddy, cruising along beside him and asked if it was all right if the two of them went up.

The guide had no problem with this, so Tom and his partner moved away from the group, put a safety sausage up, made their ascent and were shuttled back to the liveaboard by one of the tender-boats, while the other kept watch on the site.

Note that Tom didn’t just make a unilateral decision to abort the dive. He notified the guide and got his approval first, thereby making sure a) that the guide knew what was going on and b) that the guide had no objection on practical or logistical grounds.

Tom and his buddy watched later as the tender-boats scuttled around to pick up members of the dive group who, as often happens with fast drift-dives, had eventually surfaced, scattered all over the ocean. It was almost dark by the time the last ones were picked up and brought back to the mothership.

Nobody was lost. Nobody was hurt, but one or two had endured a few minutes of concern after surfacing in a wild ocean with no boat in sight and the sun setting behind them.

Nobody had seen anything during the whole dive, however, apart from the reef racing past below them.

One said she had felt like “Indiana Jones hanging on to the bottom of that truck”. As the guide passed him on the way to the dive-deck, he gave Tom a rueful smile: “You were right,” he said.