Chilled In A Warm Climate

Chilled In A Warm Climate

US novelist DIANA SPECHLER loves scuba-diving but has one problem – even on ‘bath-tub’ dives she feels the cold. And it seems she’s not alone, because she finds plenty of dive operations are now looking to cater for divers like her 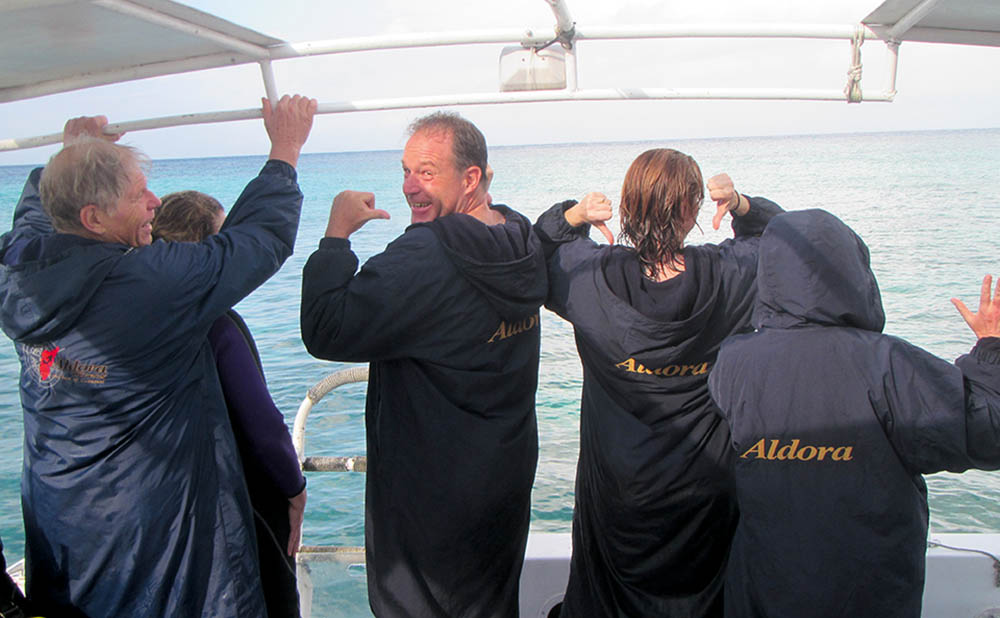 Aldora Divers in Mexico cossets all its divers with fleecy windbreakers.

This might help to explain why scuba-diving has always been a predominantly male pastime (in 2016, for example, 62.8% of PADI’s diving certifications went to men.)

Or at least, it might help to explain why I’m always the only one on the dive-boat huddling in a damp towel, teeth chattering, fingers going numb, surrounded by bare-chested, smiling men.

Twenty years ago, I got certified in the Atlantic, off the coast of Massachusetts, but now I limit my diving to oceans that are more commonly known as “bathtubs”. Even then, I get cold.

I’m always cold. I’m cold inside a house in the summertime. I’m cold between dives when the sun ducks behind a cloud. I’m cold 5m down in the Caribbean Sea in a 7mm wetsuit.

Luckily, there are some dive operations that anticipate and accommodate chronically cold divers like me. They’re focused on keeping you warm, and they’ll never advise you to take a leak in your wetsuit.

When you book your dives with Punta Mita Expeditions in Mexico, for instance, you’ll be asked to provide your measurements. The company wants to make sure that you’re getting the perfect-size wetsuit so that you don’t get air-pockets and freeze to death (you won’t actually freeze to death because the ocean is about 30°C, but stay with me).

WHETHER YOU BUY into that or not, “divers have to recover their calories”, says Omar Morales, the company’s Operations Manager. “When we’re out of calories, we shiver.”

I recommend diving in the Maldives, because the Indian Ocean is a veritable Jacuzzi. The Baros resort seems to care about the environment, which is important in the world’s lowest country: climate-change scientists worry that the Maldives could be wiped out in as few as 20 years, thanks to rising sea levels.

If you dive with Baros, you start the day with a class about the local underwater wildlife and sustainable diving. The staff want you to treat their fragile environment with respect, and in turn, they’ll treat you with respect – they have the warmest, fluffiest towels I’ve ever encountered on a dive boat, and they serve hot tea with pure peppermint leaves.

Although Bali has cold water during dry season, the outside temperature is nice and hot. Says Cedrick Saveuse of Geko Dive: “Using the sun’s natural heating properties before, between, and after dives helps tremendously. Heck, even the sunfish do that, right?” He also notes that the coldest dives are the ones on which divers are stuck in one spot, such as the cleaning station at Manta Point, so if you’re a diver who gets cold easily, you might enjoy the more action-packed dives with strong currents that force you to work up your pulse-rate.

Saveuse also encourages you to make friends with your fellow-divers: “Share a great dive experience and recollect fun memories of past dives with engaging divers. Nothing beats human warmth.”

I DON’T KNOW WHAT could be cosier than diving back in Mexico with Aldora Divers in Quintana Roo. It warms up its clients as if they’re Olympic swimmers who need to maintain their body temperature for peak effectiveness between events.

As soon as you come up from a dive, you’ll pull down the top of your wetsuit and be zipped into a giant windbreaker with fleece lining. “Some people are colder than others,” says Guilermo Mendoza of Aldora Divers.

“You never know who will be in the group, so we have jackets for every diver on the boat. They don’t take up much space, we just roll them up like sleeping bags. And at the end of the day, we hang them out to dry.”

Afterwards, you’ll be within walking distance of downtown Cozumel, where you can warm up with tequila shots to your heart’s content.

If there’s one place that chronically cold divers like me fear, it’s Maui in Hawaii. On one hand, the diving includes a volcanic crater, octopus hide-outs and excellent visibility. On the other hand, the water temperature is a nightmare. Which is to say, it’s 5°C colder than I prefer.

But Scuba Shack has you covered. It puts waterproof heat-belts inside its wetsuits. These are also great if you have a bad back, because the warmth will loosen your muscles.

And when you surface, you can stand under the freshwater shower on the boat and fill up your wetsuit with hot water for the next dive.

Diving in New Zealand is pretty frigid, but Dive! Tutukaka gets it. It serves hot soup, hot tea, hot coffee and hot chocolate. It provides hot showers and sprays hot water in your booties.

Then you can dive the remains of a four-million-year-old volcano at Poor Knights islands, named (according to one theory) for Poor Knight’s Pudding, which is basically fried bread and eggs with brandy, which would also keep you warm (but you’d have to pack your own).