Think you’ve seen it all under water and ready for new thrills? HENLEY SPIERS found a hot contender in the new-thrills category recently, off Mexico’s Pacific coast 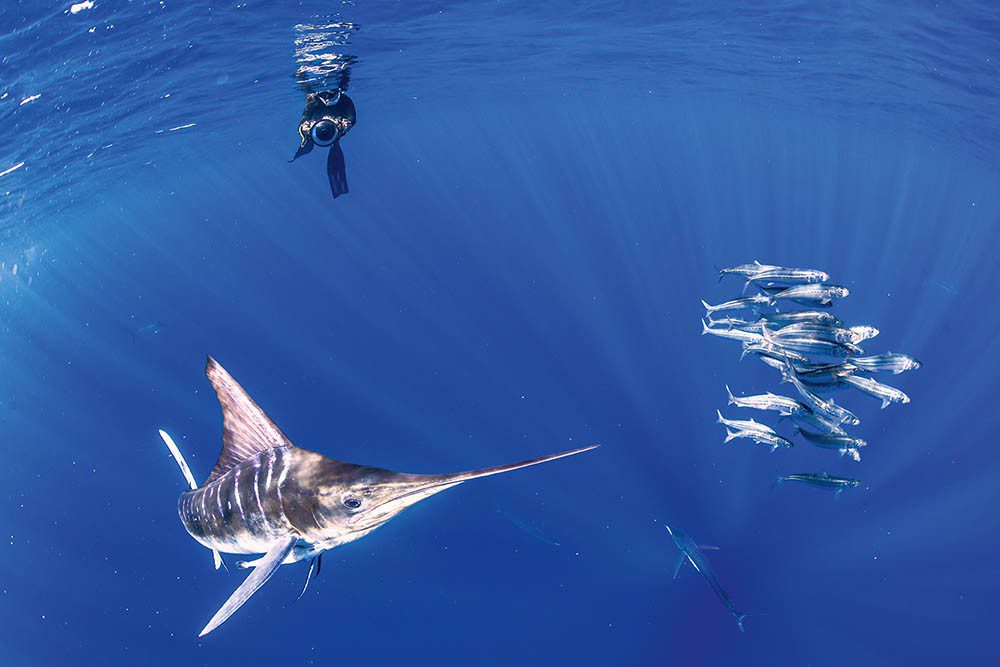 The marlin proved to be remarkably intelligent and agile predators, able to turn on a dime to avoid curious humans.

perched on the edge of the boat, fins hanging above the water, one hand gripping my camera, the other clenched tightly around a nearby pole, my heart-rate rises as we follow the trail of frothing water.

Birds swoop in as streamlined bodies break the water surface and dark silhouettes of large animals swim our way. The captain eyes the action, swiftly turning course to face us into the oncoming horde.

Hurtling in, my left hand wipes the dome-port of bubbles and my heart thumps even harder, as I try to see clearly through the agitated water.

Suddenly, my eyes locate the dark shapes heading straight for me. I barely have time to raise the camera before a frantic shoal of sardines whooshes past.

Their hunter follows a split-second later, splashing back down under water after an acrobatic leap, turning its long bill and muscular body at the last moment to avoid my unexpected presence.

All around, scores of marlin encircle me, each one following the scent of this deadly ocean highway.

looking for the most exhilarating and unusual marine encounter of your life? How about jumping in with big packs of striped marlin, as they hunt down sardine baitballs in the open ocean?

I am always on the look-out for new underwater opportunities and, in 2018, became aware of newly resurgent marlin encounters off the Pacific coast of Baja California. Enticed by the prospect of photographing a fish that has received far more attention from fishermen than divers, I signed up for the next available expedition.

Arrived in La Paz, our small group of adventure-seekers gathers over breakfast to share deep-sea tales and Instagram handles, before boarding a mini-truck for a four-hour drive away from the state capital.

Eventually we arrive in a small fishing town, devoid of tourists, and with an authentic taste of Mexican life outside the city hubs. The town grew rich from the spoils of the sea, with the local fishermen living the life of rock-stars, sure that the ocean’s rich bounty would keep the good times rolling. But fish stocks collapsed, and the community has faced financial hardship ever since.

Among the lost underwater abundance were the striped marlin, which used to aggregate offshore, attracting a fleet of sport fishermen.

In the past couple of years, the marlin have been back, and a unique opportunity to get in the water with this stunning billfish is now available.

Our skipper, Melecio, is a fisherman who turned his hand to tourism in these lean years. In his lifetime he has seen drastic change in the local waters, and the effect that large-scale commercial fishing can have.

He wears a worried expression as he discusses the state of the sea here, and talks proudly of his daughter, 10-year-old Damaris Perla, who wants to be a marine biologist and urges him to protect sharks.

we are here to find striped, the smallest species of marlin, but still able to reach an impressive 3.5m long, and 230kg of apex ocean predator. When agitated, the distinctive stripes on these fish change colour, turning from charcoal to a vibrant shade of lavender.

Usually this is a solitary species, individuals coming together only for spawning, something that makes this event all the more special.

Here we hope to find them in huge numbers, aggregating to hunt on shoals of sardines. With the action expected to be fast and furious, we are leaving the tanks behind and experiencing it as streamlined snorkeller/freedivers.

Getting to the marlin is no piece of cake, but enduring a little hardship makes the reward all the sweeter.

We wake as the sun rises, and drive into town for huevos rancheros at a small street-side cafe.

Then it’s on to the harbour, where we meet Melecio and board our panga-style boat.

It’s sunny but chilly, and we huddle up on the vessel as it skims across the glassy bay. Thirty minutes later we come to a sandbank and prepare for a unique commute.

A truck-and-trailer operates off the beach here, as a steady stream of vessels queues up for a ride across the sandbank.

It’s much quicker than going the long way round, and demands a little passenger participation, as we help to tie off the rope and move all our weight to the bow of the boat.

The whole thing is either disconcertingly, or charmingly, ragtag, depending on your perspective. I find that it adds to the sense of adventure, and enjoy bouncing along the sandy trail, keeping an eye on the desert landscape for birds and reptiles.

Once on the other side, we don wetsuits and scan the horizon for signs of life on the open sea. Excitement builds. Conditions can be rough here, but today we are fortunate to have blue skies and low winds, even up to 20 miles offshore.

Far out at sea, we’re looking for birds as the first indicator of action below. From late October to the end of November baitballs of fish gather, in turn attracting the marlin.

Our guides explain that the distance of the birds to the surface is relative to the depth of the fish. If they are flying high, the fish are deeper; when they are just above the surface, the fish will be just beneath.

It takes a while to spot any birds, but then the shout goes out and we see winged silhouettes on the horizon. Melecio guns the engine to give pursuit. With this kind of big-animal trip, you have to be patient, but always ready.

We don masks and fins as the boat charges across the water, and our anticipation builds. As we get closer, we find the birds just resting on the water surface, next to a plank of sea-lions, with no sign of the hunt.

We jump in anyway to enjoy the company of the playful sea-lions,  and for a timely “bathroom break”.

Within minutes, we’re called back on board. The skipper has sighted more birds a few hundred metres off.

This time there is no mistaking what lies beneath: marlin are piercing the surface as they hunt down their prey.

we eagerly jump in to bear witness. We find a baitball that has been reduced to just a dozen individuals, with several marlin taking turns to push them to the surface before going in for an attack. The marlin are ruthless, picking off every last one of the fish, stunning them with their bills before swallowing them whole.

These last remaining sardines are desperately seeking shelter in the open ocean, and soon decide that we human observers are their best bet!

They swim in close to our bodies as the marlin lurk nearby, and, not wishing to become an active part of the hunt, we try to swim away. But the baitfish are stubbornly sticking to their last remaining lifeline, and we end up having to bat them away.

I’ll admit to being a little nervous at moments like these, but throughout our close encounters, the marlin proved to be remarkably intelligent and agile predators, able to turn on a dime to avoid us curious humans, and generally timid around other large beings in the sea.

Speaking of large animals, this year the aggregating marlin have been joined in the hunt by sea-lions. After usually seeing them in colonies, it’s strange to see them so far out at sea.

The differing temperaments of the sea-lions and marlin are clearly evidenced in their hunting strategies. The sea-lions bring a joie de vivre to every activity, and seem to rejoice in the chase, often swooping in on the fish without even bothering to lunge for a bite. By my estimation, they succeed in catching a fish about 10% of the time.

Meanwhile the marlin are efficient but cautious, catching their prey on about 50% of forays, but cowed in the presence of the sea-lions. When the sea-lion packs catch up to and surround the bait, the marlin get shy, remaining in sight but deeper down, and without attacking the fish.

We also enjoy encounters with several other charismatic marine animals. Turtles are frequently sighted, but are usually timid, diving down as soon as we enter the water.

On one occasion, I get in and am pleasantly surprised to see that the turtle’s head remains above the surface as I get closer. Sadly, the reason for its approachability soon becomes morbidly clear: this loggerhead is trapped on the rope of a fishing-pot, thrashing around in a vain effort to free itself.

I remove some of the line, but part of the rope is tightly ensnared around its flipper. Calling for help, I am joined by Kim and Mark, who come armed with a knife and the wherewithal to free the traumatised turtle.

On another occasion we come across a small baitball preyed on by dolphinfish, more commonly known as dorado or mahi-mahi on restaurant menus.

We even sight a sailfish, artfully disguising itself as one of a group of marlin, its identity given away when its trademark, beautiful dorsal sail-fin rises victoriously as it wins the race to catch an elusive sardine.

Out here in the open ocean, there are two kind of encounters with the baitballs: static, and running.

When the baitball is static, you can stay with it for a long time as the predators pick off the fish one by one.

When the bait is running, however, the faster marlin have control.

As the days progress, and we become more aware of the different behaviours, I grow to prefer the short but dynamic encounters when the sardines and accompanying predators are on the run.

When the baitfish are static, the marlin seem to relax, taking their time to hunt them down. Though a chasing encounter lasts only 10-20 seconds, the marlin are hunting far more aggressively in these instances.

They raise their game, sprinting and leaping through the water in pursuit.

The absolute, adrenaline-charged, action of our drops onto marlin running after baitfish is what stays with me most vividly from this trip.

Usually, I take great pleasure in the serene meditation of diving, but these addictive encounters must be among the best available to marine-life lovers, and leave me eager to return next season.

GETTING THERE> Aeromexico flies from London Heathrow to La Paz, via Mexico City (total journey around 16 hours).

DIVING & ACCOMMODATION> Nomad Diving discovered the aggregation and is organising a trip to visit the marlin this November, nomaddiving.com 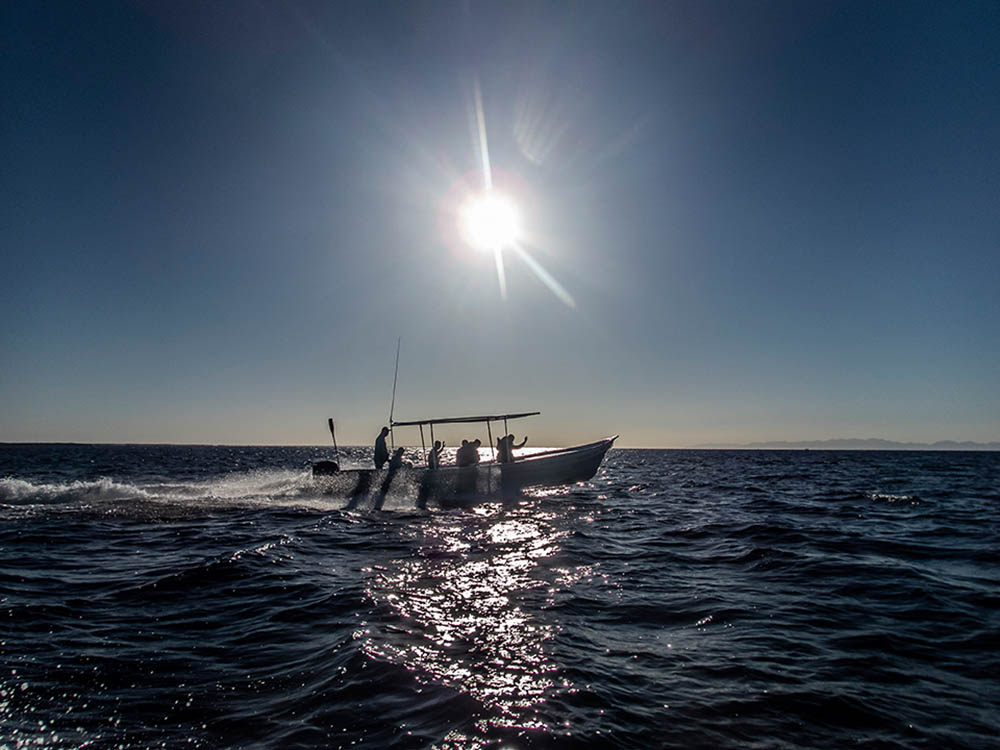 WHEN TO GO> The marlin aggregation occurs from late October to late November.

HEALTH> This is a snorkelling trip which requires a good level of physical stamina.

PRICES> Return flights are available at around £620. An eight-day marlin experience including accommodation costs US $2950pp (two sharing).