Often divers who embark on technical diving are experienced enough to have some unlearning to do first. That, as SIMON PRIDMORE explains, can aid in understanding of how to be a team-player 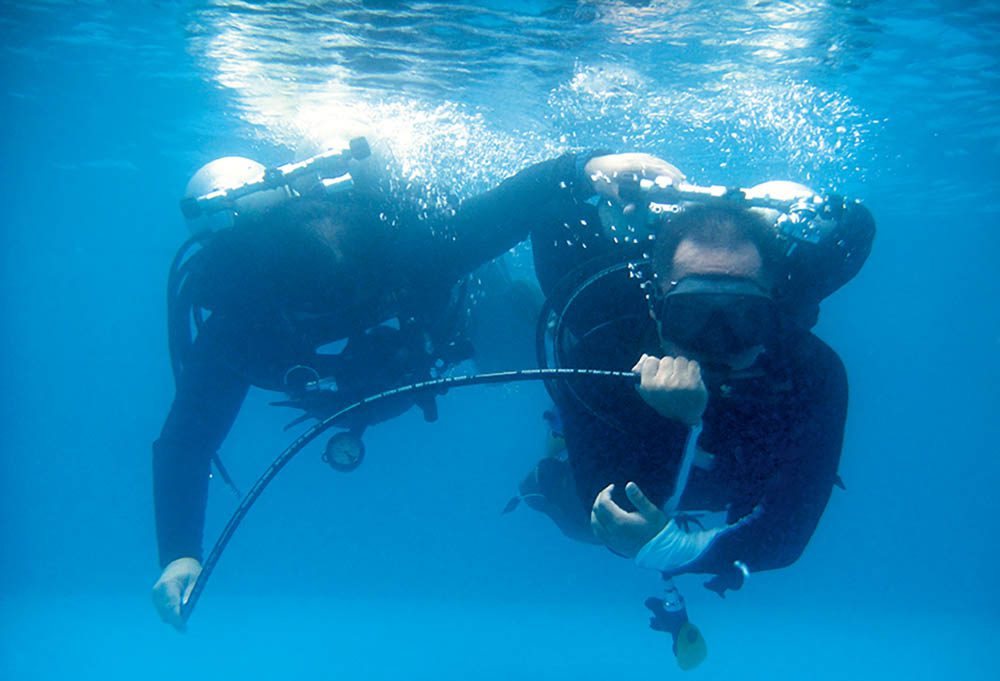 WHEN THEY START technical diving, many people are surprised by how demanding the training is. They are not used to courses that involve conditioning exercises, insistence on perfection, stress management and the development of mental discipline.

The bottom line is that technical diver training needs to be tough. Dealing with more complicated equipment and surviving in challenging environments and situations require very high levels of performance.

The courses are both academically and physically testing. There is a vast quantity of information to digest, and a huge amount of maths.

There are also many hours of skills sessions and several long dives, during which students are confronted by a number of staged potentially life-threatening incidents with which to deal.

Complacency is a major threat to the safety of a technical diver. People who sign up for the courses often have a great deal of diving behind them.

The initial confined-water session is designed to be a sharp reality check, a reminder to the students that, despite their experience they do not yet have anywhere near the necessary skill levels.

They discover that there are degrees of diving ability that they have not even perceived before.

If you are not yet a technical diver and you are contemplating going down this road, don’t be deterred by this. Embrace the feeling of being a novice again and be ready to learn.

Don’t let your ego get in the way. Understand the benefits of being pushed to a point where you feel you may break, or where you find yourself outside your comfort zone and in a situation with which you cannot deal. This just means that you have discovered weaknesses in your skills, mind-set, attitude or teamwork that you need to strengthen if you are to become a safe technical diver.

During the course, a good technical-diving instructor will create stressful situations that mimic real life emergencies. These events are artificial and the conditions are carefully controlled but they feel very real to the students, who are faced with life-threatening problems to solve.

Their failure provides the instructor with opportunities to make teaching points in circumstances in which the students are in the perfect state of mind to receive them.

When divers make mistakes, especially mistakes that they know could endanger their survival in real life, then the memory of the incident and the course of action they should have taken will become seared permanently into their minds. Also, the knowledge that they have encountered the problem in training and dealt with it successfully gives them confidence. This is another crucial weapon in their survival armoury.

Another reason that technical diver training has to be tough is that experienced sport divers (especially instructors) have often fallen into bad habits that represent a threat to their survival in the technical diving world.

These habits need to be broken. My friend Larry was one of these divers.

He was a confident individual and

a dive-instructor of long standing. He signed up for a technical-diving course and, from the outset, was evidently determined to show what a good diver he was. He excelled in the confined-water sessions and was made team-leader for the first training dive.

It all started off fine. Arriving at depth, he gave an OK signal, indicated the direction of travel and then started swimming along the wall.

For someone wearing a twin-set and

a stage-cylinder for the first time, his buoyancy and trim were excellent. He had a powerful fin-stroke and looked good in the water. The only problem was that his team were not faring so well, and they quickly fell behind.

Seeing the situation and spotting a great teaching opportunity, the instructor created a number of simulated team emergencies, all of which the team had to handle without their leader.

They began to fall still further behind. By now, Larry was too far ahead to notice.

Halfway through the planned bottom time, he reached the turn-point of the dive. He waited patiently for the others to catch up, flashed a quick OK sign, indicated that they were all to turn round and headed back to the ascent point.

He arrived right on time. The others, who had fallen behind again, were late. This meant extended decompression time, which took them all, Larry included, to the limit of their collective gas reserves and caused a lot of stress.

Larry too, was becoming visibly annoyed. It was clear that he felt he was surrounded by a bunch of clowns, who did not share his remarkable talents and were messing up the dive.

With everyone back on the boat, equipment stowed and drinks in hand, they all went to the bow for the dive debriefing. Larry was smiling confidently, certain that he was going to be singled out as the star of the show.

But, instead of conducting it himself, the instructor handed the debriefing over to the dive-team and asked them to assess their leader’s performance.

They completely savaged Larry. All the resentment, frustration and anger that had built up during the 90-minute dive spilled out. The lessons Larry learned from his team-mates were transmitted with such passion that he probably still remembers the feeling today.

Larry had run the dive as if it was a competition rather than a team exercise in which, unless everyone succeeds, they all fail. Scuba-diving is a team exercise, not an individual pursuit.

Unfortunately, in mainstream sport diving, although the concept of diving together is mentioned frequently in the context of the much-maligned buddy system, it is greatly misunderstood, poorly applied and largely ignored.

So experienced divers such as Larry usually end up functioning alone and depending on themselves.

In technical diving, the team is always stronger than the sum of its parts. The team’s strength derives from its combined force, skills and gas supply.

Teamwork is something most divers have to learn when they begin technical diving. The main reason why students often fail tests in the early phases of the training is that they try to solve the problems alone.

Once they start working as a team, they find everything much easier and discover that the training is not actually as tough as it initially seemed.