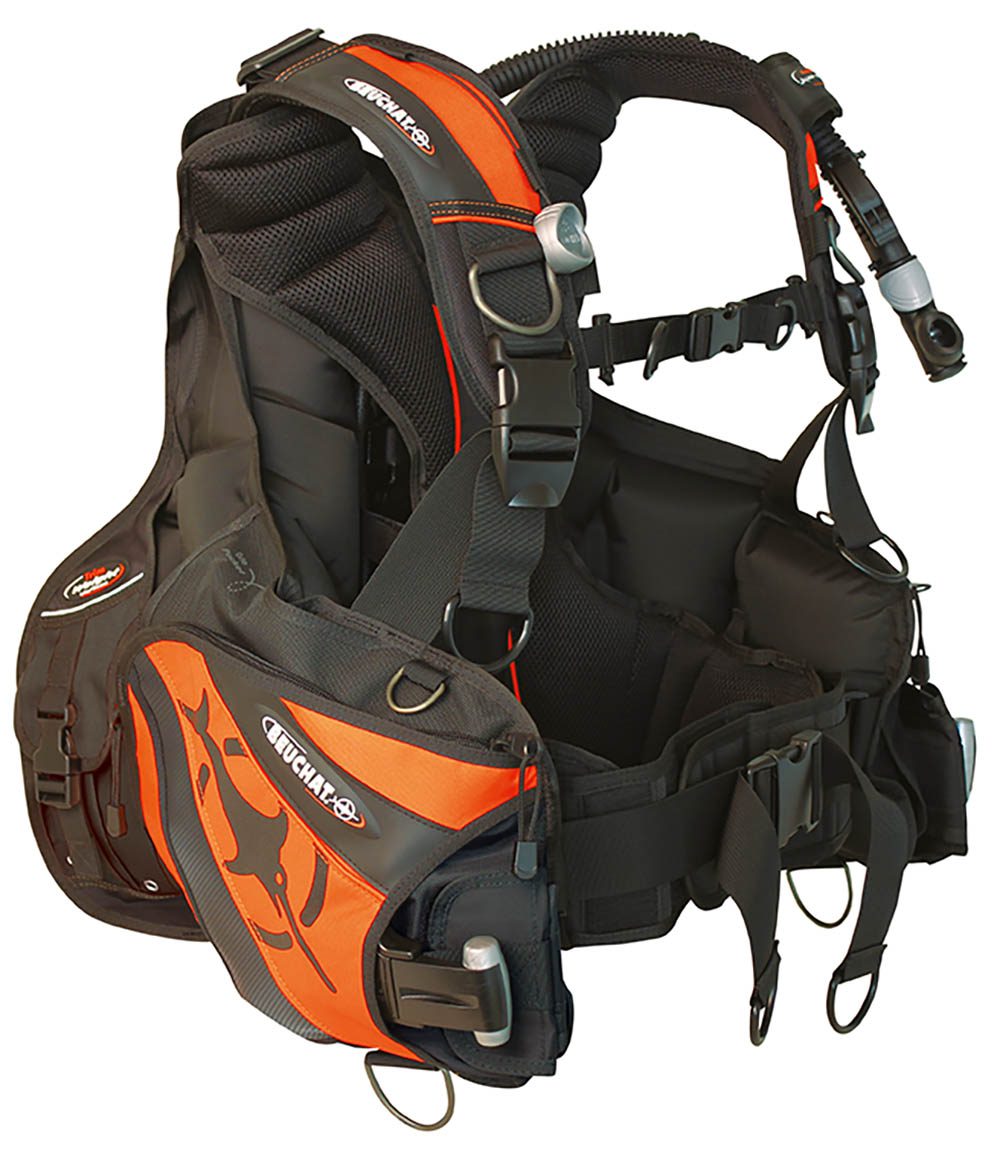 MY FIRST BC WAS A Buddy Commando Profile. I dived with it for years, home and abroad, and then bought a wing and retired the Buddy to the loft. But if I ever have a problem with the wing I pull it back out of the loft, swap over the direct-feed hose – also still the original – and take it diving. I confidently expect it to outlast me.

When Beuchat sent me its new Masterlift X-Air Comfort BC to try, I was immediately reminded of my Buddy. This new Beuchat is a serious bit of kit. It’s solid, meaty and with a build quality that ought to keep it going for years.

I don’t know if Beuchat will appreciate its state-of-the-art BC being compared to a piece of diving kit that’s 30 years old, but for British divers of a certain age there can be no higher recommendation. The Beuchat probably isn’t bulletproof, but it feels and looks as if it is.

Mind you, as soon as I had stopped wandering misty-eyed down memory lane, it was easy to spot the advances that those 30 years have delivered.

The basic design looks like that of a standard jacket-style BC, but it isn’t. Well, it is. But not really. Sorry, I’m babbling. What you get is a cross between a standard recreational BC and a tec harness and wing system.

The BC bit has the large front pockets you would expect, but the bladder is mostly around the back, shaped and operating a bit like a wing. The idea is probably to offer the advantages of both in a usable and stylish package.

The “Comfort” part of the name obviously comes from the thickly padded harness and the soft pad that covers the interior of the hard backplate to which you strap the cylinder.

Don’t think tec-diver backplate, think plastic backplate as used on most jacket-style BCs, and with a neat hand-grip at the top for carrying the set-up around the boat.

At the back, you get a camband to fit a single cylinder. The band has a conventional cam arrangement on one end, but the actual band is split and features a robust hook-and-bar system to make swapping out similarly sized cylinders a little quicker and easier. Useful on a two-tank boat-dive when you switch tanks between dives, or if you’re hiring the BC.

Around the front, the corrugated hose is much smaller-gauge than BCs of the past, and terminates in a neat power inflator.

The supplied low-pressure hose has a good-quality connector that snaps easily and securely into place, with a plastic clip to hold the inflator-hose tight to the corrugated hose, and a Velcro strap to keep the hoses neatly stowed and the inflator easily to hand when you need it.

The inflate and deflate buttons are ergonomically placed and comfy to press. The BC inflates smoothly and easily, and when I blew it up hard and left it for a couple of days it remained nice and tight.

You’ll need your right hand to operate that one, but what all these dumps mean is that, regardless of your position in the water, there’s going to be a dump-valve where you need it and can reach it.

The design and construction of the buoyancy cell is very well done. When you’re swimming along on the dive in a nice horizontal trim, the wingy part behind your back inflates first, expanding backwards to cradle the cylinder and putting your buoyancy compensation exactly where you need it to remain stable in the water.

Then, when you fully inflate the BC as you’re waiting on the surface at the end of the dive, quite a lot of the BC blows up, still mostly low down but now extending around to the front, to hold your head higher out of the water and keep you face up.

Seen from directly above or below, the filled buoyancy cell will look a bit X-shaped, hence the name.

What else? Well, the shoulder-straps break open with a big pinch-clip and they adjust in length really easily, thanks to some clever buckles.

Lift the front of the buckle with a finger and the strap runs smoothly through and extends. Pull on the BC, and the straps have a large

D-ring at the end to make pulling them down and snugging the jacket nicely around your shoulders really easy.

Then there’s a Velcro cummerbund with a pinch-buckle strap over the top and a sternum-strap to do up to make sure that nothing moves unless you want it to.

And, of course, there’s an integrated-weight system. The carriers are easy to load with blocks, and it’s equally easy to slide the loaded pockets into place or pull them out to dump lead. When you want them to stay put, they stay put.

There’s an additional trim-weight pocket either side of the wingy bit as well, if you find that you’re unbalanced in the water, or just need more lead.

The pockets are a decent size, and easy to zip and unzip. The zips are two-way, so you can zip from front to back or back to front, and there’s a cord with a small suicide clip in the left pocket that would be perfect for storing a car-key while you’re diving.

Not an electronic car-key – the pockets aren’t waterproof – but they’re big enough to hold something useful such as a DSMB or spool.

The pockets aren’t stitched to the BC all the way around, so there’s a space behind each that makes an additional loose pocket of sorts, and printing on the BC suggests that these would be ideal for an octopus reg and your gauges.

Add some sewn-in-place D-rings and that’s about it, except that I haven’t mentioned the vivid colour or the logos. They’re big and bright, and nobody will need to ask who made your BC. Shy divers need not apply. Personally, I like it.

Putting the Beuchat on was easy enough after opening the shoulder-straps as far as they go, and the big D-shaped loops on the ends of them were easy to find for pulling the straps tight. The cummerbund was well placed and the sternum-strap nicely cleared the inlet valve of my drysuit.

Once on, the load was spread evenly and comfortably across the tops of my shoulders, thanks to the padded harness.

Striding into the water, however, it was immediately clear to me that all that lovely padding is just a wee bit buoyant, and an extra kilo of lead wouldn’t have gone amiss.

Swimming around, I was very comfortable and stable. Horizontal trim was easily achieved and held without even having to think about it.

I had set the shoulder of the bottle on a level with the top of the handle on the backplate as my starting position, and was quite happy to leave it there.

Had I felt head- or feet-heavy, the single band would have allowed me to move the cylinder up or down a good bit to achieve a better position.

Time to get more adventurous, and I started by going properly head-down.

The BC might have shifted a fraction, but not so that I noticed, and I got the same secure feeling however much I rolled around – clear evidence once again that the designers have done their job well.

Back at  the surface, the Beuchat held me high out of the water, with my mouth and nose well clear of the wet stuff. My first thought was that the BC was holding me vertically, but after a few seconds I found myself slowly tilted slightly backward, face up.

Even when so full of gas that the slightest movement caused a dump-valve to operate, there was no real squeeze.

De-kitting was easy, thanks to the pinch-clips on the shoulder-straps. I always break the left shoulder and swing the BC off to my right – that way I can keep my reg in to the very last moment if I’m de-kitting in the water, to pass up into a RIB, for example.

So what didn’t I like? Well, the sewn-on D-rings at the bottom of the BC could do with being a bit further back so that one’s reel and DSMB can be stowed a bit more neatly or, if push comes to shove, a stage-bottle can be clipped on comfortably.

Beuchat isn’t usually the first manufacturer to spring to mind when dive-kit is being discussed, but based on the performance of the various bits of its equipment I’ve tried in the past few months, that’s a shame. This is another well-made and well-thought-through product. I’d be very happy to own one.