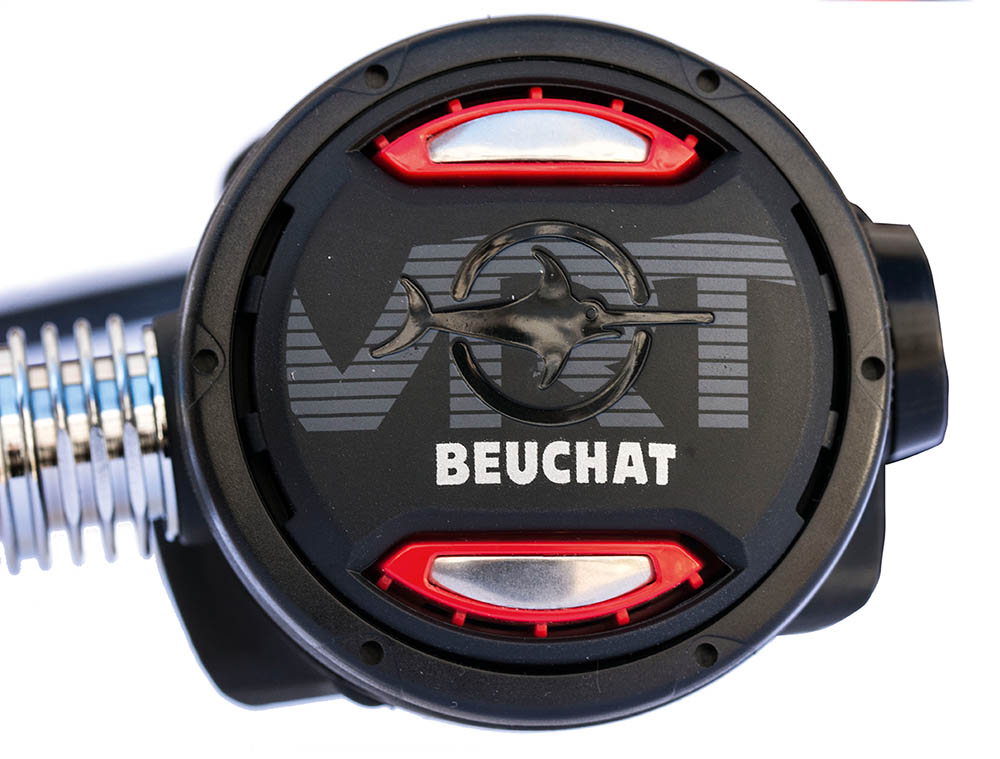 FORTY METRES DOWN, I’ve dumped all the air from my BC and I’m upright, finning like crazy. Billows of sand roll across the seafloor like dust clouds from an atomic explosion. I’m trying to see if I can beat the lung with the Beuchat VRT90 regulator.

“Beating the lung” is an expression meaning that you need more air from your regulator than it can deliver. It leads to air starvation.

The vicious finning, while over-weighted, was meant to simulate the demand a panicked diver might place on this budget regulator. The VRT90 breathed superbly.

It’s perhaps not that surprising that the VRT90 performed so well. The first stage is an over-balanced diaphragm design. Over-balancing is a modification that first appeared in the early 1990s to mitigate a problem with breathing air under pressure.

As we dive deeper, we need more gas to fill our lungs – around five times as much at 40m as we require at the surface. Regulators are made to provide high flow-rates of gas on demand, so they can deliver these large volumes of air, but as it becomes increasingly pressurised, it also becomes denser and more viscous.

This can be felt from around the 30m mark in my experience, so we breathe a little harder and air seems to take a little longer to fill the lungs.

Most first stages match the increasing water pressure as you descend exactly. In an over-balanced design it delivers slightly higher pressure than the surrounding water pressure to the second stage – effectively giving the air an extra push to make it flow faster and be easier to breathe.

The second stage is a pneumatically balanced design. In an unbalanced second stage, a fixed-strength spring is needed to keep the second-stage valve closed against incoming air pressure from the first stage, until you inhale.

The spring needs to be quite strong or, on deep dives, it might be unable to hold back the air from your tank, and you’d get a freeflow.

When you want air, you have to use lung power to open or  “crack” the valve against the closing force of the spring, which takes effort.

In the VRT90 balanced second stage a fixed-strength spring is also used, but it can be fairly weak, because air pressure is used to back it up.

Changes in depth and pressure automatically result in changes to the air pressure acting with the spring to seal the second stage. This matches the changing pressure of the air being delivered from the first stage, balancing it.

In effect, the changing air pressure in the VRT90’s balanced second stage acts like a variable-strength spring, always working at the optimum strength for the depth of the dive.

This reduces the effort you need to make to inhale and get the air flowing. It’s a selling point on premium-priced second stages as a rule.

So, by combining an over-balanced first stage and pneumatically balanced second stage, Beuchat has engineered a very easy-breathing regulator for a low price.

Crack the valve and the venturi effect kicks in. It maintains the air-flow by creating a vacuum that keeps the diaphragm depressed and the valve open for you throughout your inhalation.

The first stage is compact, and the test model was fitted with a 300-bar DIN connection.

The handwheel is extremely easy to use – DIN handwheels often aren’t, tending to jam and be hard to undo when wet or with cold hands.

DIN is generally recognised as a superior tank connection, but isn’t used everywhere. Beuchat offers an A-clamp converter that quickly screws on and off the DIN connector without tools, allowing you to use the VRT90 with 200- or 300- bar DIN cylinders as well as A-clamp tank-valves.

There is an hp port and two mp outlets on each side. One of the right-hand mp ports is occupied by the primary second stage, and one of those on the left will be needed for your BC direct-feed.

This leaves an mp port free on each side to take an octopus and a drysuit direct-feed, for example. Most recreational divers should be able to configure their hose layout the way they want.

The second stage is very compact, and the tight design makes it easy to get close to an SLR camera viewfinder, for instance.

I was very impressed by the exhaust tee, which does a great job of expelling bubbles out of your field of view. Another benefit is that if your second stage goes in upside-down, it won’t displace and flood your mask – as can happen in a sharing situation if people are starting to panic.

Even inverted, this second stage clears with a sharp exhalation and is a dry breathe. The purge is easily operated with or without gloves.

The second stage is connected to the first by a hose that’s supple when pressurised, so there’s no restriction as you move your head.

The second stage is also near neutrally buoyant, so there’s no noticeable weight on your jaw. Even on dives of more than an hour the VRT90 second stage remained so comfortable that I was largely unaware of it.

A pre-dive/dive switch helps to prevent the second stage from freeflowing when not in your mouth. I always leave my own regulator’s switches in Dive mode.

If you forget to do this before submerging, you’ll get breathing resistance that can cause headaches with many regulators. I chose not to find out if this was the case with the VRT90!

In tests with other regulators, I’ve also seen an octopus set to pre-dive handed to a very experienced diver and cause some alarm.

There isn’t an adjustment for cracking effort. I’ve owned several regulators with this feature and have never found it beneficial. I want my regulators set for the easiest breathing possible.

The VRT90 is rated for water temperatures below 10° according to its CE designation. Testing in Gibraltar I had temperatures of 14°, so I couldn’t confirm this.

It’s also CE-certified for use with an octopus to 50m. I had an octopus, but trying to overbreathe a regulator at depth in a sharing situation safely required support that wasn’t available, so I’ll take that on trust.

The VRT 90 gives an easy, smooth breathe, even under heavy demand. The compact size, light weight and easily coiled hose make it an attractive choice for the traveller.

Anti-icing protection also makes it a good contender for those seeking to explore coldwater locations. I was very impressed. Thank you to Dive Charters, Gibraltar and the Gibraltar Sub-Aqua Club for their help and support on this test and that of the Scubapro Equalizer BC.