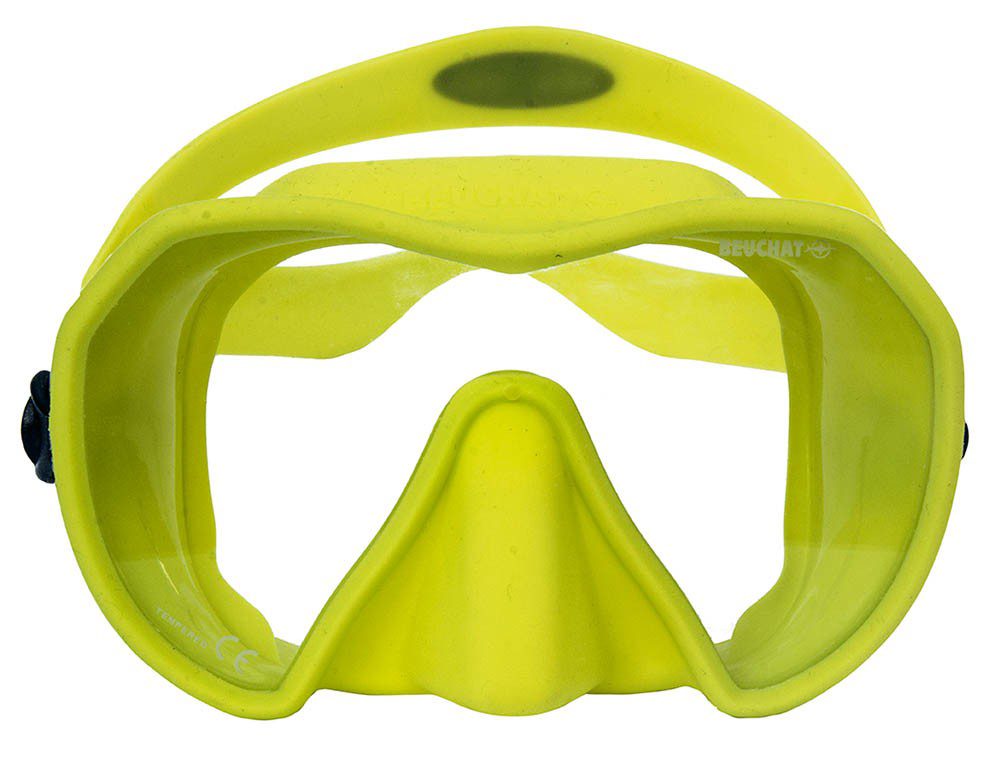 Nigel’s point was well-made. A face-mask isn’t always just to see through. Sometimes it’s there to be seen in.

As an enthusiastic underwater photographer, when it comes to models for my own camera I regularly face two problems. Firstly, no buddy to pose for me, a difficulty only partially overcome by inane selfies. Secondly, buddies with those damn black masks!

Sometime in the 1970s, mask manufacturers discovered silicone. Silicone was more supple than rubber, so it sealed better and was more comfortable.

It was also hypoallergenic, which seemed to solve a problem that didn’t really exist.

Best of all, it was clear. This was touted as being less claustrophobic, so if you didn’t like that closed-in feeling, you’d be fine diving so long as you didn’t swim into a cave or the vis went to rat-poop.

But the real benefit of clear skirts was for underwater photographers. It made it so easy to light your model’s face. For a very long time, the only masks with black skirts were the ones still made from cheap rubber.

Then black skirts came back into fashion. These have definite advantages, because they exclude peripheral light coming in through the sides when you’re looking straight ahead. This makes it easier to see into holes, which is why spearfishers use them, and they retain contrast better when you look through a camera viewfinder, which is why photographers adore them.

When I saw the Beuchat Maxlux S mask, I immediately asked to try it out, remembering Nigel’s comments and Alex’s striking cover.

The model had the opaque skirt with all the advantages of a solid black one, but the huge range of bright solid colours would, I thought, lend themselves to matching up to the marine world.

The mask itself is frameless, which reduces weight a little. Otherwise, it’s fairly traditional. The large single faceplate provides a wide field of vision in all directions. For modelling, it gives a good view of your model’s face compared to a two-lens design. It’s nice glass and doesn’t introduce a green tint to fleshtones.

Like any mono-lens mask, fitting eyewear means a custom lens installation or stick-in reading glasses, but these look terrible in pictures.

The skirt is supple, is very comfortable and sealed perfectly over two weeks’ beard growth. The mask never leaked, even on long test-dives, but it could be easily fully cleared hands-free.

Lifting the buckle slackens the strap, which worked well with gloves, and pulling the strap-end tightens it. If you need to reach your nose to equalise, you can easily pinch the nose-pocket or block your nostrils from underneath.

My camera has a monitor, not a small viewfinder eyepiece, and the Maxlux S worked very well with it.

I was testing in Gibraltar, with the help of Dive Charters and Gibraltar SAC. I slipped into a favourite undercut and took this selfie. It’s not a Mustard masterpiece but, I hope, it shows the potential of the Beuchat for modelling. When I do buddy-dive it’s with other under-water photographers, and I’d love to get them into the Maxlux S so that we can pose, however peremptorily, for each other.

And if you‘re not concerned about photo-modelling potential, seeking a nice comfortable mask with a good field of view, the Beuchat Maxlux S is well worth a look.

It even comes in black.