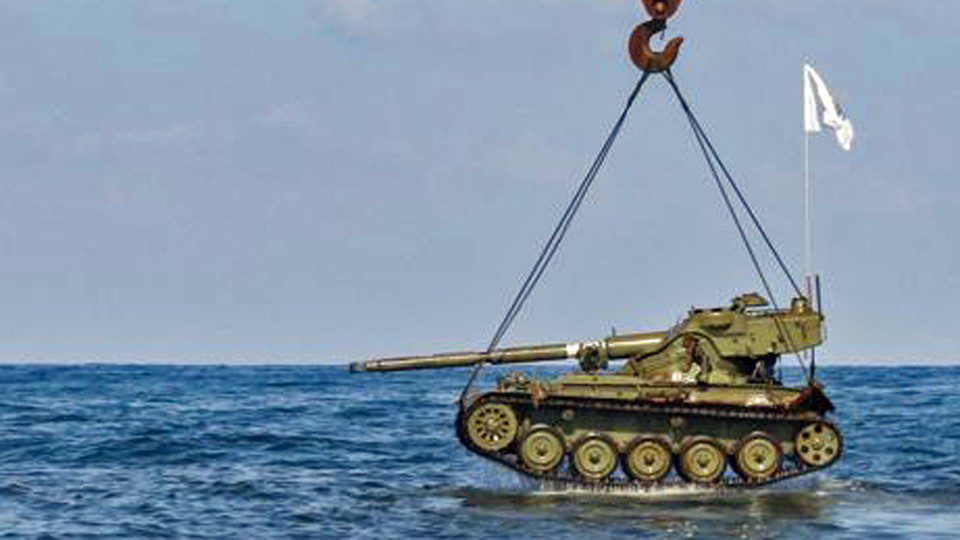 Claimed to be the eastern Mediterranean’s “largest underwater park”, an artificial reef made up of 10 military vehicles has been set up off the island of Al-Zireh, two miles out from Sidon in Lebanon.

The initiative is designed to create a new habitat for marine life and to create an attraction for visiting as well as local divers.

The Lebanese Army donated six ageing tanks and four other armoured vehicles for the project, which was the idea of Mohammad al-Sarji, head of Lebanon’s Union of Professional Divers. It was organised by Sidon Municipal Council and Friends of Al-Zireh Island.

The installation was completed in 13 hours on 28 July, with the vehicles ferried out to the site and manoeuvred into their designated locations using a crane. The vehicles were placed over a 150sq m area at depths of 14-18m.

And there was reported to be a political angle to the installation, with the tanks’ gun barrels all aimed at Israel “out of solidarity for the Palestinian people”.

“The Army’s gift is the essence of this garden, which will provide a home for coral reefs and fish reproduction,” said Sidon’s Mayor Mohammad Saudi at the opening event.

The move is also part of a campaign to restore Lebanon’s image as a tourist destination.

Political problems apart, Mediterranean waters off the country’s 125-mile coastline have been branded as “dangerously contaminated”. The Lebanese Agricultural Research Institute stated last year that the coasts off Sidon and Beirut were particularly badly affected by overflowing coastal landfills and sewage dispersal.