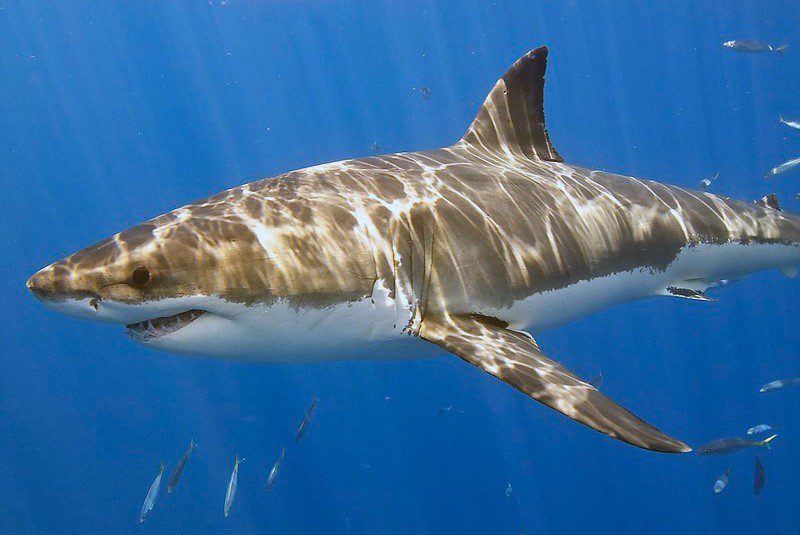 Most fish are cold-blooded, but some 35 species have evolved the ability to warm their muscles as well as their eyes and brain.

Being warm-blooded, like the great white shark and Atlantic bluefin tuna, allows these fish to keep their bodies at a higher temperature than the surrounding water – but only now do scientists believe they can explain the reason for this.

It had previously been suggested that because warmer muscles are more powerful they enable the fish to swim faster, while at the same time enabling them to survive a wider range of temperatures, making them less susceptible to ocean warming.

The international team of marine biologists from Ireland, Australia, USA, Tasmania, Hawaii and Japan obtained what they say is the first direct evidence of the evolutionary advantage of being warm-blooded. They found that the fish could indeed swim up to 1.6 times faster than cold-blooded species – but that they were no better equipped to cope with climate change.

A variety of sharks and bony fish were caught by hook and line so that biologging devices could be attached to their fins while they were secured beside the boat before releasing them quickly. The data, including water temperatures encountered by the fish in their habitats, and their depths and speeds, was combined with data already available.

The extra speed shown was likely to make the animals better hunters and/or travellers, and to help them to process and identify prey, say the team, because the quicker they swim the faster an image moves across their eye.

Many of the warm-blooded species are under threat, with the Atlantic bluefin classed as Endangered and the white shark Vulnerable.

“Our results indicate the ability to warm their bodies doesn’t allow them to occupy a broader temperature or depth ranges,” said one of the team, Lucy Harding, a PhD candidate in fish physiology at Trinity College Dublin

“This means we may have been overstating the resilience warm-blooded fish have for facing changing ocean temperatures.”

The study is published in Functional Ecology.