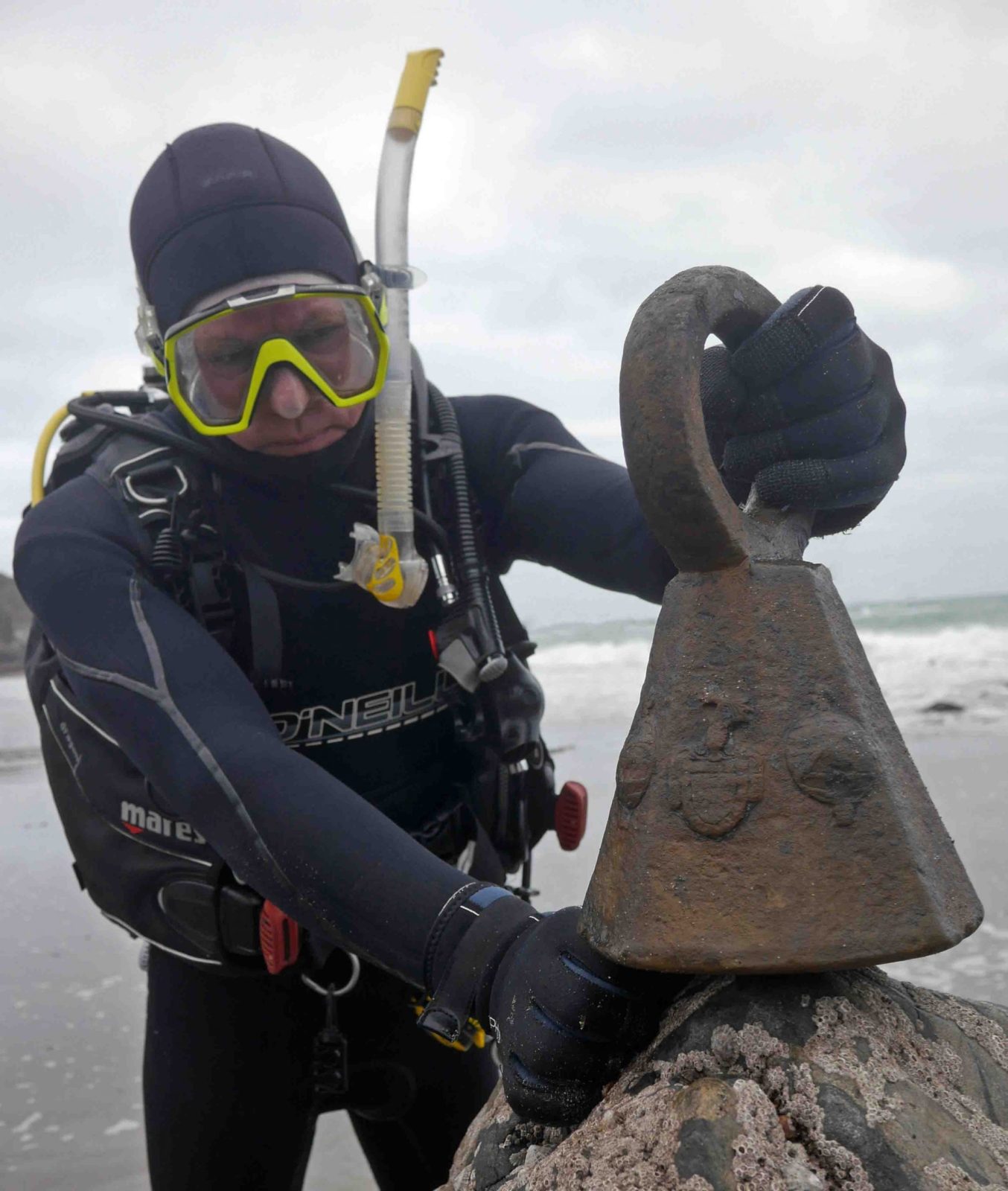 David Gibbins with one of the weights. (Picture: Rachel Hipperson)

Three 25kg bronze merchant’s weights have been recovered from the Schiedam, a 17th-century Dutch-built shipwreck near Gunwalloe off Cornwall’s Lizard Peninsula.

Local maritime archaeologist David Gibbins excavated and raised the weights over the course of eight scuba dives in September, although he has only now announced the significant find after preparing a detailed report on their origins.

The remains of the ship, also known as the Schiedam Prize, were discovered in 1971 at a depth of 4-7m. Designated as a protected wreck, since 2016 the site has been investigated by Gibbins and local dive operator Mark Milburn under licence from Historic England.

In 2018 Milburn wrote for DIVER magazine about diving and exploring the wreck-site as shifting sands allowed – read the article on Divernet here.

On her final voyage from the Netherlands, the Schiedam was captured by Barbary pirates off Spain – and then captured again 10 days later by the English captain Clowdisley Shovell.

As a sixth-rate ship of the line, she was subsequently used to carry guns and other equipment, labourers with their families and horses during the English withdrawal from the North African trading post of Tangier.

When the convoy was dispersed in bad weather the Schiedam ran aground off Cornwall on 4 April, 1684. No lives were lost, and some salvage was carried out at the time.

The octagonal weights were spotted by Milburn while he and Gibbins were diving the wreck in 2017, but they were too deeply buried in sand to recover at that time.

Used by traders in Tangier, they are thought to date back to the early 16th century. Portugal occupied Tangier from 1471 to 1661 and they bear the Portuguese royal coat of arms in relief on their sides, along with small symbols of a ship.

Measuring 19 x 33cm, the weights have large carrying rings on top. Gibbins believes the artefacts were probably cast in a gun foundry and were likely to have been recycled for their bronze in England.

“They are unique among surviving Portuguese weights for their age, size and decoration,” says Gibbins, “and are among the oldest and most unusual artefacts to be recovered from a shipwreck off Cornwall.”

His detailed report can be found here.