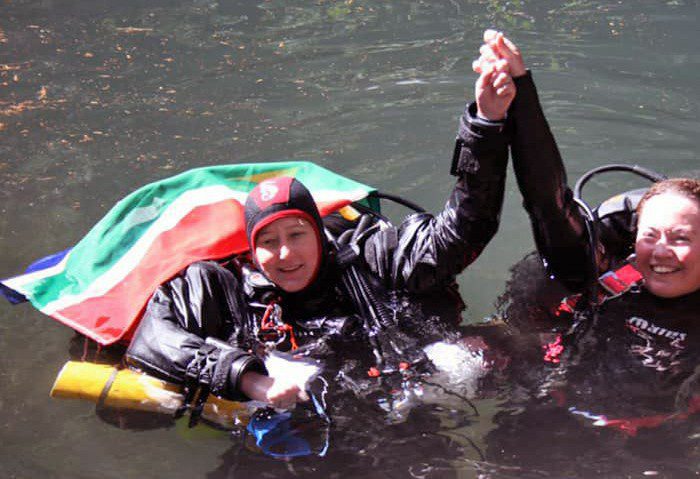 The 26 March dive lasted 7 hours 18 minutes, most of that time spent decompressing, and was carried out on open circuit scuba using a bottom mix of trimix 6/85.

The record is an unofficial one until verified by Guinness World Records, which had  observer Theo van Eeden at the site to witness the dive.

It has been held for nearly 17 years by fellow South African Verna van Schaik, who carried out her own 221m dive at Boesmansgat and welcomed van den Oever’s dive with the words: “Congrats! It is an epic feat!”

van den Oever’s previous deepest dive at the site was to 201m in February last year. A science graduate from the University of Witwatersrand in her home town of Johannesburg, she is an instructor with technical diving school Somewhere Out There Diving (SWOT), members of which supported her record bid.

“This was a dive that I have been working towards for a long time,” said van den Oever. “It was a challenging dive. You train not for the dives that go well but for when things don’t go well.

“ I decided to turn at 236m, as my intuition told me that this was where I needed to stop.”

van den Oever was a student of Nuno Gomes, who in 1996 took the Guinness World Record for deepest cave dive at 283m, again in Boesmansgat.