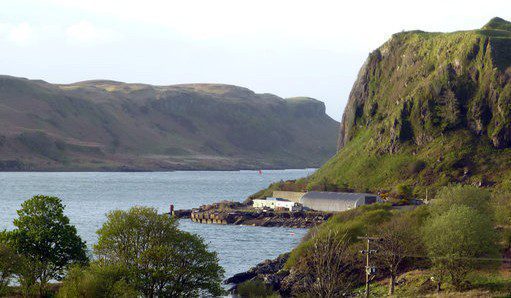 A scuba diver died south of Oban in the west of Scotland on Sunday morning (9 February) – while surface-swimming from shore to a dive-site during Storm Ciara.

The 50-year-old man, part of a group of four visiting from the Yorkshire area and described as experienced in a report by the Press and Journal, had entered the Sound of Kerrera in the shelter of Puffin Bay, near Gallanach.

He was said to have told his dive-buddy that he was having breathing difficulties before passing out. The other diver towed him to the closest point ashore, but this proved a difficult place from which to extract him.

Staff from the nearby Puffin Dive Centre came to the rescue by boat and on foot and managed to pull the diver out of the water using a line. They provided CPR for around 20 minutes until the emergency services arrived, but the man was pronounced dead.

Oban Coastguard, which received a call at 10.14am, mobilised its helicopter, local rescue teams and the RNLI lifeboat.

Coastguard station officer Iain MacKinnon noted that shore-diving would have been the sensible approach considering the prevailing weather, while the lifeboat crew’s report noted the “challenging conditions”.