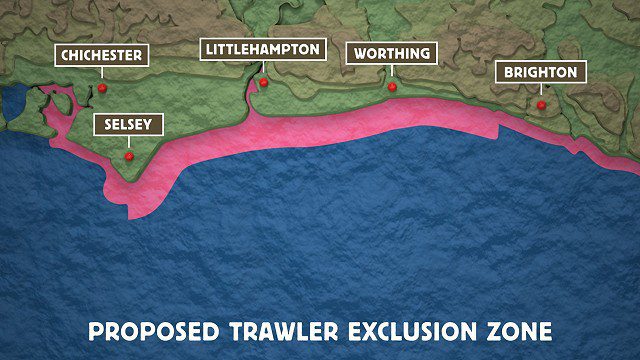 Scuba divers are being asked to join others in backing the exclusion of trawlers from a devastated area of Sussex coast – so that its once-thriving kelp-forest can be restored.

Sussex Wildlife Trust says that seaweed beds were well-established over more than 60 square miles between Selsey Bill and Shoreham-by-Sea until the 1980s, when a combination of trawling, dredging and storms put the habitat into serious decline.

The trust argues that kelp matters not only as a natural sea defence and a habitat for species such as seahorses, cuttlefish, lobster, sea bream and bass, but because it captures damaging carbon from the atmosphere “arguably even more efficiently than terrestrial forests”.

As well as directing the monitoring efforts of Seasearch volunteers, including divers, to the area, the trust has now linked with Blue Marine Foundation and the Marine Conservation Society to launch the Help Our Kelp campaign. This is backing a new byelaw proposed by the Sussex Inshore Fisheries & Conservation Authority (IFCA) to exclude trawlers within 2.5 miles of the coast.

The consultation closes in a little over a week, on 10 October. Launching the campaign this week, Sir David Attenborough described kelp as a “vital” element in tackling climate change.

“The loss of the Sussex kelp forests over the past 40 years is a tragedy,” he said. “We’ve lost critical habitat that is key for nursery grounds, for water quality and for storing carbon. This marine re-wilding project, if approved, will ensure the Sussex seas remain healthy for generations to come, and could have far-reaching impact for other parts of the UK coast.”

Kelp forests cover a quarter of the world’s coastlines. Read about Australia’s vast but threatened Great Southern Reef in the November issue of DIVER magazine.

The Sussex kelp campaign follows the recent announcement of what has been described as the UK’s biggest seagrass-restoration scheme, in which scuba divers are participating in the collection and planting of a million grass-seeds off the Welsh coast.

The campaign to restore two hectares of damaged habitat has been organised by Sky Ocean Rescue, WWF and Swansea University, again with the aim of combining marine-life protection with alleviation of climate-change effects.

Pollution, run-off, coastal development and boat damage are said to have destroyed as much as 92% of the UK’s seagrass in the 20th century, yet it captures carbon from the atmosphere up to 35 times faster than tropical rainforests. Conservationists say that seagrass accounts for 10% of annual ocean carbon storage despite occupying only 0.2% of the seabed.

Seeds collected by divers, snorkellers and waders from other British sites this summer are being stored to be planted in Dale Bay, Pembrokeshire this winter.

The replanted area could  support some 160,000 fish and 200 million invertebrates.