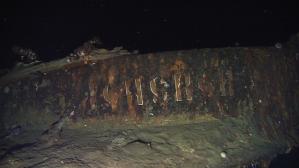 Faked image of the ship’s name, as issued by Shinil Group.

Executives of a South Korean company have received prison sentences, after hoodwinking investors into paying for gold to be salvaged from a shipwreck they claimed to have located.

A court found the three executives of the Shinil Group guilty of falsely claiming to have found the stern section of the Dmitrii Donskoi.

The Imperial Russian armoured cruiser was scuttled off South Korea during the Russo-Japanese war in 1905 to stop it falling into enemy hands. It took with it a rumoured cargo of 200 tonnes of gold coins and ingots, claimed by the group to be worth more than a £100 billion at today’s prices.

Shinil Group claimed to have found the wreck at a depth of 380-430m, using submersibles near Ulleungdo Island off South Korea’s east coast.

It issued purported photographs of the vessel’s Cyrillic name and, amid what turned out to be fabricated details of the state of the wreck, claimed to have found a large number of iron boxes containing the sought-after cargo.

Although suspicions were raised early, thousands of investors paid the Shinil Group around £5.8 million towards the salvage.

Divernet ran the story of the reported wreck discovery in July 2017, but repeated the BBC’s assertion that the Shinil Group had not lodged an official application for salvage rights. This would have cost it some £10 billion  – 10% of the estimated value of the cargo.

It also pointed out that experts had long questioned why a single warship would carry such a valuable load as the gold supplies of Russia’s entire Second Pacific Squadron, when safer modes of transport were available.

A vice-chairman of the Shinil Group, identified as Kim, was given five years in prison, a term said to reflect the fact that he had an earlier conviction for fraud. An unnamed key accomplice was given four years and the group’s former head, referred to as Ryu, was sentenced to two years, according to the Yonhap news agency.

Shinil Group, which had been formed only a month before the fake discovery, was accused of artificially boosting its share prices, and encouraging its investors to buy a crypto-currency issued by a Singaporean company, also named Shinil Group.

Although its initial claims that the treasure was worth more than £100 billion were later drastically revised down, South Korea’s financial regulator had needed to issue a warning of possible losses to potential investors, so enthusiastic was the response.

“Their responsibility for the crime is very heavy, given the method and scale, as it’s a case where they swindled many unspecified people and took huge gains,” said Judge Choi Yeon-mi of the guilty men.