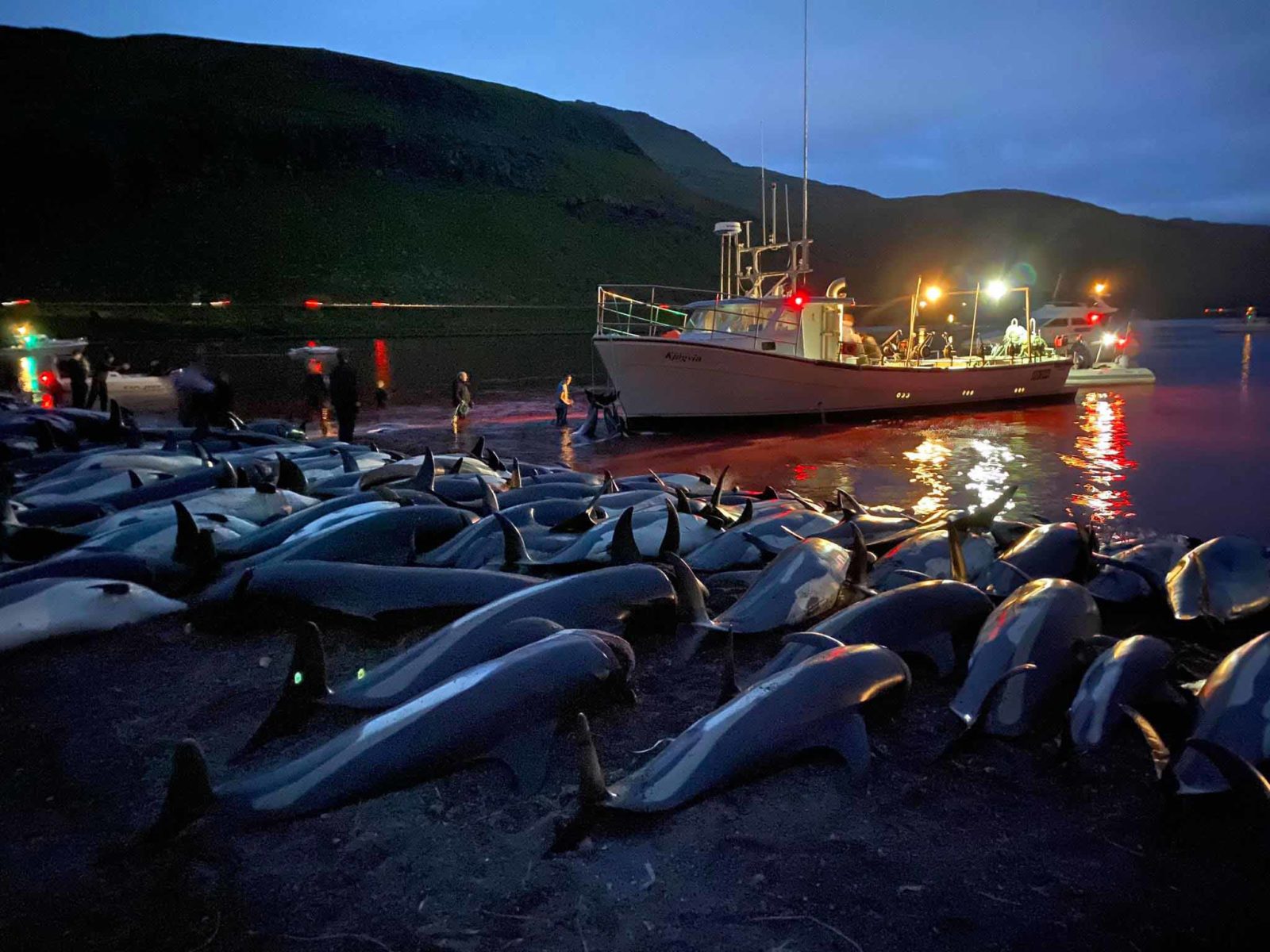 The mass killing of pilot whales and other dolphins by Faroe Islanders is an annual ritual that draws condemnation across the world, but this year’s event was the biggest single hunt recorded in the Danish islands’ history – and contravened regulations, say activists.

On the evening of Sunday, 12 September, a record 1428 dolphins were killed, according to marine-conservation body Sea Shepherd. The superpod of Atlantic white-sided dolphins was said to have been driven almost 30 miles by speed-boats and jet-skis for hours before the animals were slaughtered in shallow water at Skalabotnur beach.

The biggest previous Faroes “grindadrap” in 1940 resulted in the deaths of 1200 pilot whales but the latest could be the largest single hunt of cetaceans ever recorded worldwide, says Sea Shepherd, which has been campaigning against the grisly event for 40 years.

“This latest dolphin massacre was so brutal and badly mishandled that it is no surprise the hunt is being criticised in the Faroese media and even by many outspoken pro-whalers and politicians in the Faroe Islands,” commented the eco-activists.

Local people who shared videos and photos with Sea Shepherd told the organisation that the hunt had broken Faroese laws regulating the grindadrap, and had accordingly been reported to the police.

Among alleged contraventions were the hunt being green-lit by an unauthorised district “foreman”; inclusion of unlicensed hunters not trained in “humane” killing methods; and many dolphins dying slow, painful deaths after being hit by boats and propellers.

According to Sea Shepherd many Faroe Islanders are afraid to speak out against the hunt for fear of reprisals, but this year it says that even the usually sympathetic Faroese press quoted a former hunt leader describing the killing as unnecessary.

“Normally meat from a grind is shared among participants and any remainder among the locals in the district where the hunt takes place,” says Sea Shepherd.

“However there is more dolphin meat from this hunt than anyone wants to take, so the dolphins are being offered to other districts in the hope of not having to dump it.” Over summer, Faroese hunters had already killed 615 long-finned pilot whales.

“For such a hunt to take place in 2021 in a very wealthy European island community just 230 miles from the UK with no need or use for such a vast quantity of contaminated meat is outrageous,” commented Sea Shepherd’s chief operating officer Rob Read.

“Considering the times we’re in, with a global pandemic and the world coming to a halt, it’s absolutely appalling to see an attack on nature of this scale in the Faroe Islands,” added Captain Alex Cornelissen of Sea Shepherd Global. “If we have learned anything from this pandemic, it’s that we have to live in harmony with nature instead of wiping it out.”