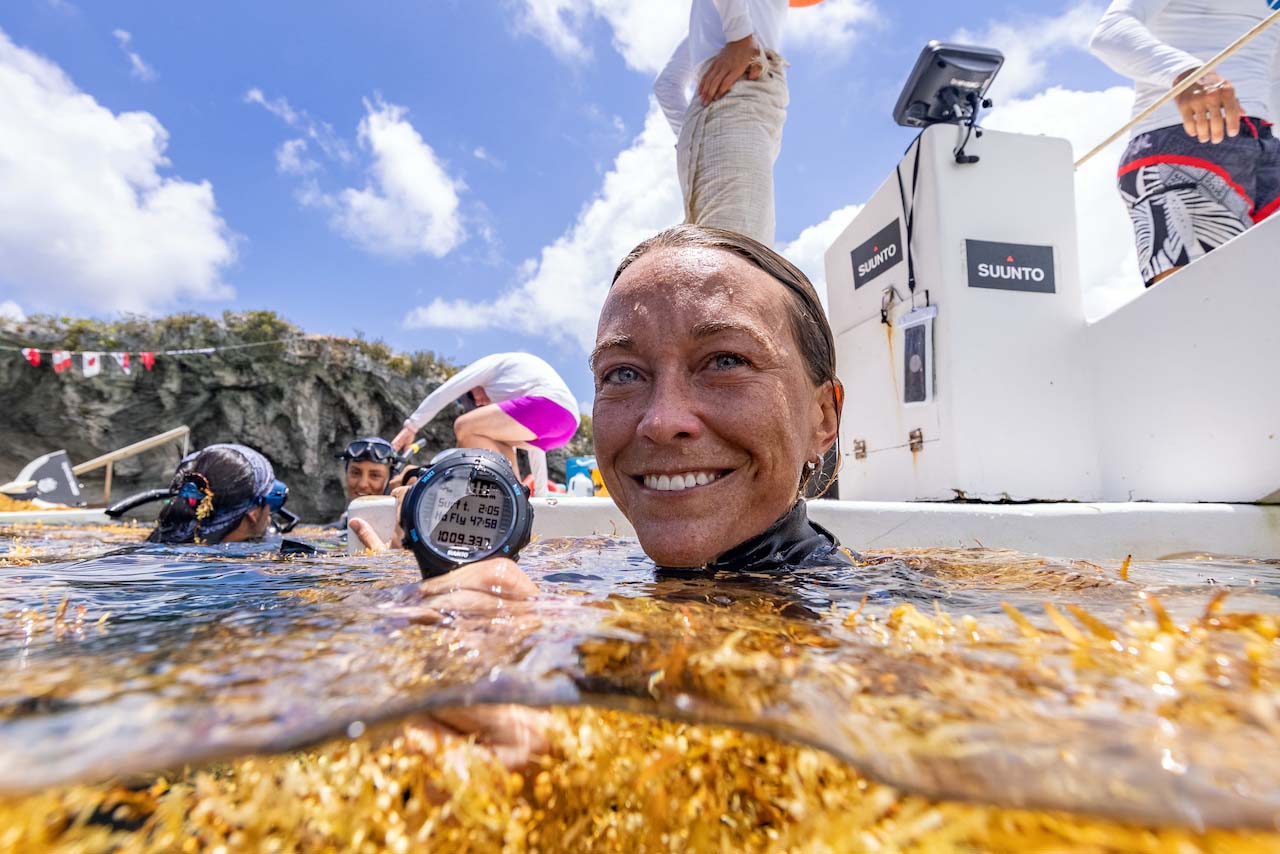 No fewer than 12 world freediving records have been broken during the nine-day Vertical Blue international competition at Deans Blue Hole in the Bahamas, with some marks switching back and forth between competitors during the event.

Among the women, Alessia Zecchini (Italy) and Alenka Artnik (Slovenia) set three records each and Alice Modolo (France) one.

Four of the records were broken on the first day of competition, 13 July, which was when Molchanov dived to 126m in the Free Immersion (FIM) discipline in a time of 4min 45sec. In FIM the diver uses a line but weight must stay constant and no fins are used.

But Zecchini would roar back on day 3 with a new world record in Constant Weight No Fins (CNF) to a 74m depth in 3min 2sec, in a dive dedicated to her friend and previous holder the late Sayuri Kinoshita of Japan. The CNF discipline is described as the purest in freediving, with the competitor touching the line only at the turning point.

The final world record of the first day came from 25-year-old Jerald, who gained the Constant Weight Bi-fins (CWTB) record in his first appearance at the event. His 116m dive took 3min 30sec, but he was to do even better on day 4, when he reached a depth of 117m in 3min 35sec.

This was one of another four world records set on 17 July. Artnik outdid her 118m CWT record of day one by diving to 120m in 3min 33sec, making her one of the top five deepest humans in the discipline.

“Not many men can dive that deep and the number is really crazy!” she said. “It’s hardcore but I was just following my progress and I knew exactly what to do and it makes me really happy.” On Day 7 she would be even happier, after achieving a depth of 122m in 3min 34sec.

Another of that five-human elite, Molchanov, reached 131m in CWT in 4min 33sec, also on day 4, to beat his own record.

The final day 4 world record went to Zecchini, who managed 101m in FIM in 3min 40sec.

“In France, it has always been all about the boys, but perhaps now they will realise that the women are also strong, beautiful divers who have so much to contribute – they can learn quite a lot from us,” said Modolo, who only recently decided to step away from her career in dentistry to focus on her freediving.

“I am so proud of all that the ladies have achieved at Vertical Blue 2021,” she said. “It is an honour to follow in the footsteps of Alenka Artnik, who held this bi-fins world record before me.”

On day 8 the irrepressible Molchanov did it again when he capped Jerald’s two CWTB records with one of his own, reaching his target 118m in 4min 38sec.

Fifty-three separate national records were also set at Vertical Blue. The event is judged by world governing body AIDA International and has been held annually since 2008, organised by freediver William Trubridge. The UK was not represented at this year’s event.