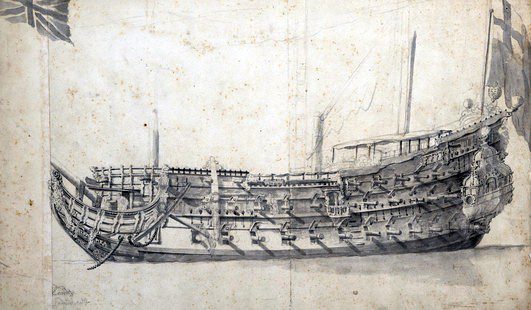 An exhibition of around 100 artefacts recovered by scuba-divers from HMS London, the 17th-century warship wreck in the Thames Estuary, has officially opened at Southend Central Museum.

The naval flagship of Admiral Sir John Lawson split in two following a gunpowder explosion on 7 March, 1665, with the deaths of more than 300 people. Five years earlier it had been part of the fleet that sailed the Stuart king Charles II back from the Netherlands to restore him to the throne.

The second-rate ship of the line was rediscovered in 2005, and diving archaeologists under the banner of the London Shipwreck Trust work regularly to excavate the historic vessel and recover artefacts for conservation.

The wreck lies near Southend Pier on the edge of a busy shipping channel, and strong currents, poor visibility and shifting sediment make the diving challenging.

The story of the local amateur divers who became qualified archaeologists to explore HMS London is told on Divernet.

The exhibition includes a selection of the 1000-plus artefacts that have been discovered in a good state of preservation in the clay silt of the estuary, the centrepiece being one of the ship’s 76 cannon.

It runs until 20 July next year, but the trust is seeking sponsorship to set up a permanent HMS London museum on Southend seafront.