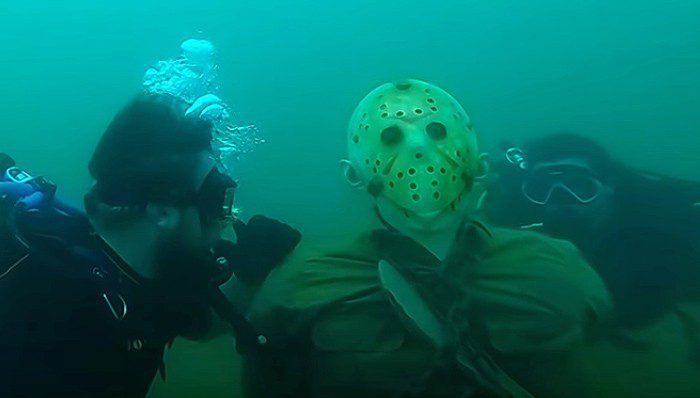 The initiative of a group of US divers to enliven their local lake appears to have gone down badly with park authorities. One addition in particular, a replica of hockey-masked movie serial-killer Jason Voorhees, has prompted them to undertake an underwater clean-up later this month.

The Voorhees character appeared in the 1980 horror movie Friday The 13th and its many spin-offs. In the film, Voorhees drowns in a lake as a child as a result of staff negligence, returning later to wreak spectral vengeance.

Lake Pleasant is an extensive reservoir near Phoenix, Arizona, open to the public for a range of recreational activities.

Local diver Zachary Nagy, 24, has said that it took him weeks to construct the Voorhees statue, which was secretly installed on a night-dive in May. He says items placed by divers were widely used as underwater landmarks, and that without them there would be little to see in the lake.

Placing artefacts was, he said, a rite of passage for Arizona scuba-divers to mark their certifications, and a way of practising diving skills. Other contributions include Christmas trees and four skeletons playing cards around a poker table.

Another popular dive-marker is a VW car, although how that got into the lake is unclear.

The unofficial additions came to the attention of park supervisors through social-media exposure. Describing them as litter that was not “respectful of nature” and could affect the lake’s eco-system, they plan to send divers down to remove them this month.

Another underwater statue of Jason Voorhees was placed at a depth of 40m in Minnesota’s Lake Louise five years ago and is said to have proved popular with divers, with a statue of fellow horror celebrity, Nightmare On Elm Street‘s Freddy Krueger, reportedly set to join it.