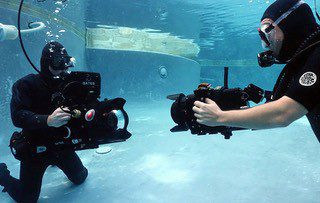 A series of free online tutorials on underwater imaging, aimed at divers currently under lockdown, is launched this week by the Liquid Motion Underwater Photo & Film Academy, based in Cozumel, Mexico.

The academy was set up by Guy and Anita Chaumette in 2012 to teach at both amateur and professional level, and the couple invite anyone inspired by their online training to later “dive deeper” by signing up for a regular course.

These range from a one-day beginner to intermediate underwater photography masterclass (US $540) through the five-day, 10-dive Pro Underwater Camera Operator ($2400) to the three-week Pro Filmmaker certification programme ($7500) or its Pro Photographer equivalent ($6275).

The Chaumettes featured in DIVER Magazine in 2010 with their pioneering work in what has since become the ubiquitous practice of fluo diving.

* ALSO CONNECTED to underwater imaging this week is a webinar called “A Diving Life: 50 Years Above and Under the Red Sea” with one of the best-known pioneers of Red Sea diving and also the founder of Fantasea Line camera housings, Howard Rosenstein. This engaging story-teller can be found using Zoom on Thursday, April 30 at 8.30pm BST – register here .