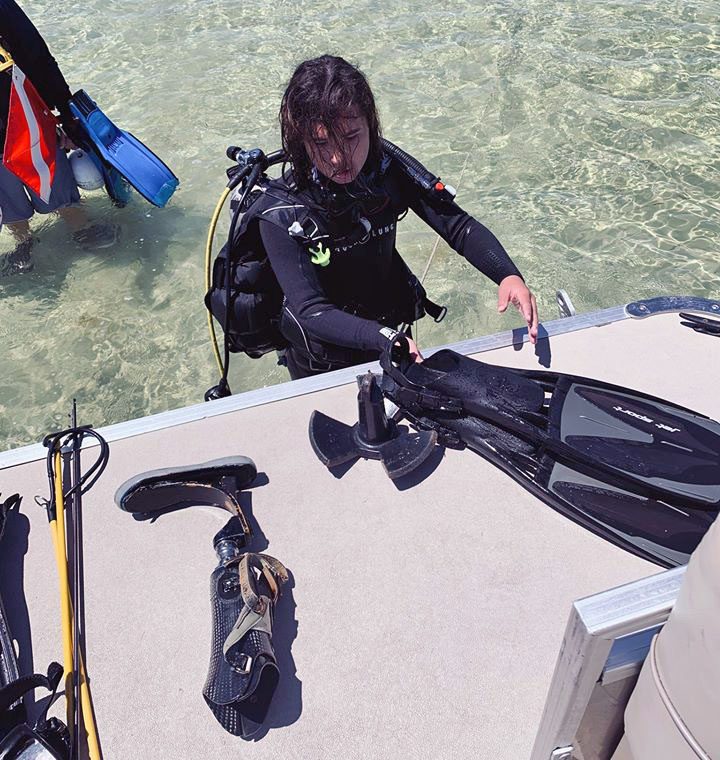 Sebastian Morris with the artificial limb.

Scuba divers are out of their brief lockdown in Florida, where a 13-year-old recently came up from a dive with a surfer’s missing leg.

Sebastian Morris found the prosthesis on 9 May while boat-diving with his father off the state’s Gulf coast near Panama City. The young diver saw a shiny object, thought “it might be treasure”, as he told CNN, but struggled to pull it from the sand. His father helped him to get it free before they realised what it was.

The Morrises recovered the leg and set up a Facebook page in a bid to trace its owner.

Within days they had connected with local army veteran and surfer Carter Hess. He had lost the artificial limb after being wiped out by a wave in early April, and without scuba gear his efforts with friends to locate it had failed.

Delighted to be reunited with his missing leg, Hess took Sebastian and his mother for dinner at one of Florida’s now reopened restaurants, as well as giving the youngster a reward. They hope to go diving together in the future.

Eight hundred miles south in the Cayman Islands, national lockdown and a nightly curfew have been imposed since March – but that hasn’t prevented the theft of 60 air-cylinders from a dive-centre.

The tanks, valued at around US $12,000, were stolen from a dock outside Cayman Diving in George Town, Grand Cayman, apparently during the night of 14/15 May, according to the Cayman Compass.

“If someone happens to see their neighbour with 60 scuba tanks in their garden that they didn’t have before, please give us a call,” said Cayman Diving’s owner Mark Williams, who has offered a $1000 reward for their recovery.

Williams was surprised by the audacity of the theft, reckoning that drivers of the one or more vehicles needed to carry the loot risked being stopped by police for breaking the curfew.

It might have been a daylight robbery, with any witnesses assuming that the tanks’ removal was authorised, but that still left the question of motive.

“Who wants 50 or 60 scuba tanks unless you want to start a dive-shop – and who is doing that right now?” asked Williams.