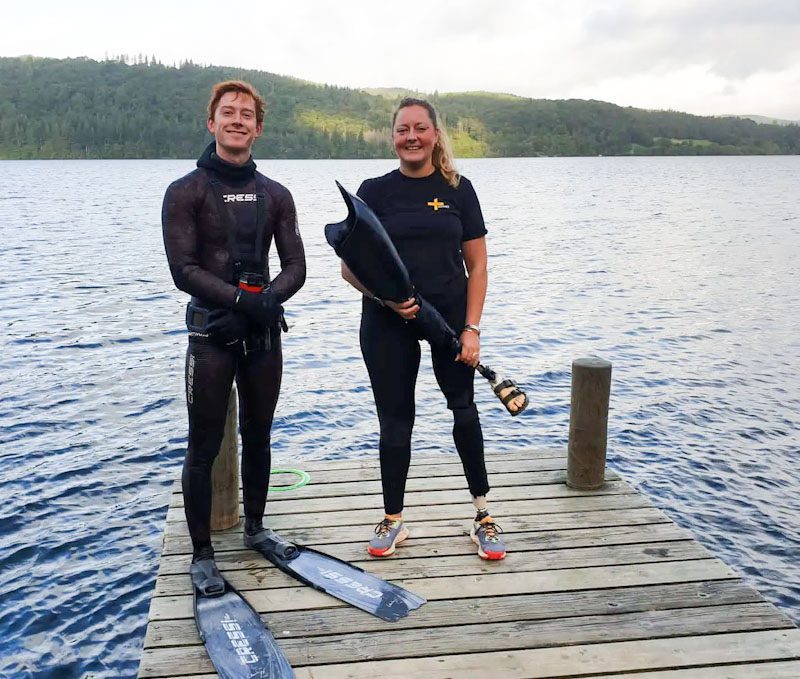 It’s not the first time divers have helped to return a lost prosthetic leg to a distraught owner, but it was a first for Lake District Diving’s Angus Hosking – and served to highlight the helpful service he offers.

Josephine Bridges, 31, from Birmingham had her leg amputated as a result of bone cancer three years ago, but recently also lost her artificial replacement, while swimming in Lake Windermere.

She had jumped off a jetty at Miller Ground on the east side of the lake, but was not sure when the prosthetic had become detached. It was only when she got back to shore and tried to stand that she realised it had gone.

Her sister appealed for help to recover the limb on social media. Her post was forwarded to freediver Hosking, who founded his free service partly to carry out underwater rubbish clearances and partly to recover lost personal items.

Over the past four years he and diving partner Declan Turner have found objects such as phones, keys, watches and jewellery – but a prosthetic limb was a first.

He found the leg about 5m out from the jetty and made light of the task: “After a quick look around under and around the end of the jetty, there it was!” he said.

Lake District Diving invites owners of private jetties or tarns in the Lakes to get in touch if they want their waters cleared. “Removing rubbish from our waterways is very important to us, and also the fact that it could hurt anyone that goes into the water,” says Hosking.

And if people lose an item of value, have a reasonable idea of its location and think it’s in less than 12m depth, the divers will try to find it.

“We run purely on donations and do not charge for what we do,” says Hosking, who has used past contributions to fund an underwater metal detector and diving safety equipment. Lake District Diving has a GoFundMe page.