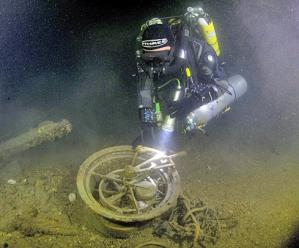 A museum that has been given ownership of passenger liner RMS Lusitania has called on the Irish government to make it easier for licensed divers to recover artefacts from the famous shipwreck.

Greg Bemis, the wreck’s longtime US owner, officially presented it to the Old Head of Kinsale Museum in Ireland yesterday (7 May) – 104 years to the day after the Cunard transatlantic liner was sunk by a U-boat.

The 240m Lusitania, the world’s biggest ship at the time, had left New York and was on her approach to Liverpool when she was torpedoed by U-20 on 7 May, 1915. Mystery remains about the exact cause of a secondary explosion that occurred seconds after the torpedo struck the hull, but within 18 minutes the ship had sunk.

There were 761 survivors, but the sinking cost 1198 lives, a tragedy that turned global public opinion against Germany.

The wreck lies on its starboard side at a depth of 91m, some 11 miles off Kinsale lighthouse. It is a war grave protected by an Underwater Heritage Order under Ireland’s National Monuments Acts.

Venture capitalist Bemis has owned the wreck and licensed scuba diving at the site since the mid-1960s, intent on proving the cause of the second explosion, which he believes to have resulted from the neutral passenger ship carrying ammunition.

He has already presented a number of recovered artefacts to the non-profit museum, which opened four years ago. The ship's main telegraph was brought up by diver Eoin McGarry in 2017, after another telegraph and pedestal had been recovered the previous year.

Also in 2017 the museum opened a Lusitania memorial garden, and it now plans to build a “full-scale” museum to commemorate the wreck.

Con Hayes from the museum told Irish broadcaster RTE that the Lusitania was in some ways a forgotten ship, despite being arguably of more importance historically than the Titanic, which had sunk three years earlier,

He hoped that Ireland’s government would consider relaxing the strict rules on diving the wreck for research, and for recovering artefacts.

The bequest takes effect either when the museum has been built, on the death of Bemis, or when he writes a letter to execute it. The multi-millionaire told RTE that it was “embarrassing” to consider how much money he had spent on the Lusitania.

“I’m going to be 91 the end of this month,” he said, “and it’s about time I have some new people responsible for carrying on the research and the exploration and the recovery of artefacts for the museum.”