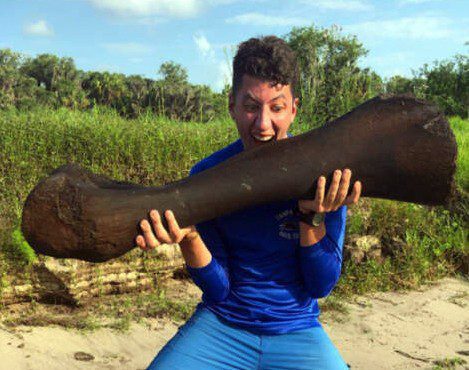 Henry Sadler with the mammoth bone.

It’s not unusual for scuba divers to come across prehistoric animal remains, particularly in parts of the USA and Russia. But a woolly mammoth bone, especially of the size found by a buddy-pair in Florida in late April, is a rare discovery.

Henry Sadler and Derek Demeter regularly search for such remains in the state’s inland waters, and were diving the murky Peace River near the town of Arcadia. Though murky and populated by alligators, the river is popular with fossil-hunting divers.

It was Sadler who found the 1.2m leg bone of a Columbian mammoth (Mammuthus columbi), a creature that became extinct more than 10,000 years ago. The distant relative of the modern elephant roamed prehistoric savannah grasslands for more than 2 million years, and the divers speculate that their find could be 100,000 years old.

“Amazingly, it is almost completely undamaged and very well mineralised,” said Sadler of the bone, which was a humerus from the upper part of a mammoth's front leg and weighed in at 23kg.

Mammoths could weigh up to 9 tonnes and stand 4m high. The two amateur paleontologists had only ever found the animals’ teeth in the river before.

The day they found the legbone was not over, however – the divers later made another find that, although incomplete, they described as the “holy grail” of Florida fossils – the top third of the tooth of a sabre-tooth tiger.