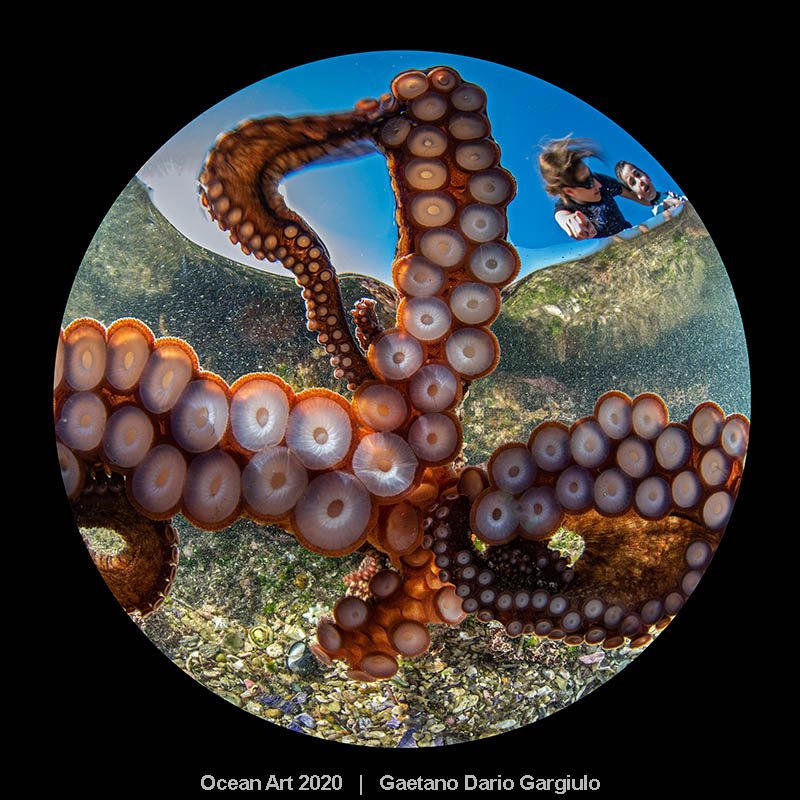 The shot chosen as “Best of Show” in the ninth Ocean Art underwater photography competition comes from Australia, and is described as “a once-in-a-lifetime moment of an octopus taking a selfie with the help of the photographer and his curious family in the background”.

The photo was taken near the home of underwater photographer Gaetano Dario Gargiulo, in the tide-pools of Kamay Botany Bay National Park in New South Wales.

“I remained in the tide-pool, as the tide was too low to venture outside of its boundaries,” said Gargiulo. “In one of the shallowest parts of the pool I noticed an octopus. I placed my camera near its den and the octopus started interacting with it. It came completely out of the den and, to our amazement, it started shooting pictures!

“My son (three years old, in the background) was very curious about the octopus.” Gargiulo won a seven-night Bilikiki liveaboard diving package in the Solomon Islands for his submission.

The Ocean Art underwater photo competition winners for 2020 have just been announced, and the California-based Underwater Photography Guide (UPG) website, which organises the annual contest, says that despite the global travel restrictions imposed by the Covid-19 pandemic the event attracted “an extremely high calibre of photos”.

“Underwater explorers took photos in their own backyards or select destinations open to travel and revisited their archives to bring us some eye-catching photography,” said UPG. “These photos showcase the perseverance of underwater artistry amidst the adversity of the times.”

And despite the difficulties caused by coronavirus, UPG says that dive-trade sponsors provided US $45,000 in diving holiday and equipment prizes.

Many of the same sponsors had also helped to raise funds for the World Health Organisation and the US Centres for Disease Control & Prevention in their fight against Covid-19 through a one-off Ocean Art Safe Under The Sea competition last year.

“The Ocean Art team was thrilled to see that so many photographers were able to get out, dive and immerse themselves in photography this year,” commented UPG publisher Scott Gietler. “The Best of Show was especially impressive. My only concern is that the octopus should get its share of the prize, as it did assist in taking the shot!”

Winning photographs in all categories and details of sponsors and prizes can be found on the UPG site.

Winners will also be featured in the March issue of DIVER magazine.