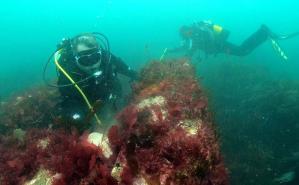 Inspecting a possible gun-mount. (Picture: HE)

The Lundy wreck of pre-WW1 battleship HMS Montagu, the only surviving example of a Duncan-class vessel in northern Europe, has been given protected status.

The shallow wreck, popular for training and early-season dives, has now been scheduled and added to the National Heritage List for England.

While this indicates that it is closely managed as an archaeological site, scuba divers are free to dive it, but not to touch or interfere with it.

Launched in March 1901, the 124m, 14,000-ton Montagu was built in response to the build-up of French, Russian and German warships leading up to the war.

HE describes it as an example of the transition from 19th-century Ironclads to the turbine-powered big-gun British Dreadnought warships launched in 1906 – the year Montagu came to grief in the Bristol Channel.

While undertaking secret radio-communication trials the battleship grounded on rocks at Lundy’s Shutter Point on 30 May, following a navigational error in dense fog. The navy decided to break the ship up and salvage it where it lay.

The dive-team reported that the wreckage, lying in 5-15m, consisted mainly of tall piles of armour-plating in kelp-beds and some live 12in shells. They also found what they thought could be a gun-mount.

“It’s a rare example of a pre-Dreadnought battleship, marking a fascinating period of expansion and innovation in the UK’s naval forces and, since its foundering in 1906, has remained an intrinsic part of the Lundy community’s cultural identity, enjoyed by locals, tourists and the diving community alike.”