Sea snakes that ‘see’ through their tails

Sea snakes that ‘see’ through their tails 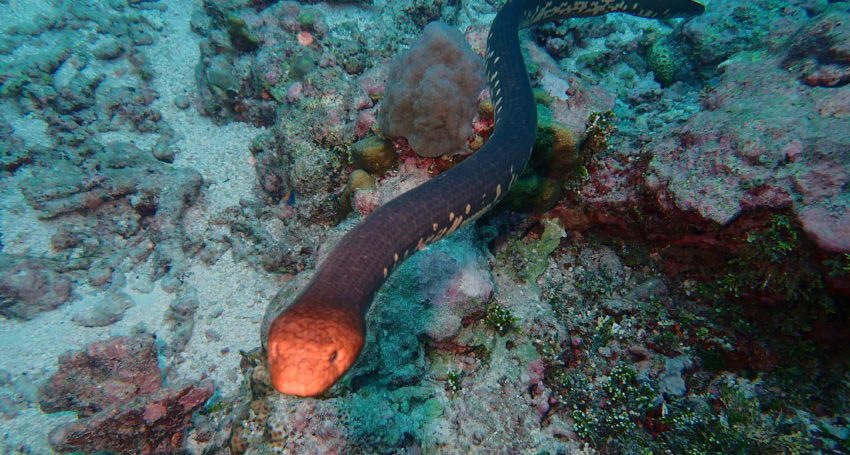 Divers trying to sneak up on an olive sea snake from behind shouldn’t be surprised if it takes rapid evasive action. The species has developed a light-sensing ability in its skin that allows it to “see” through its tail to avoid predators.

The sea snake, Aipysurus laevis, spends much of its time on the move hunting for prey, but although highly venomous its paddle-shaped tail could attract predators to attack it from behind.

“Often they rest during the day and they’ll curl up under a rock or coral,” said Jenna Crowe-Riddell, lead author of a new study from a research team led by Australia’s University of Adelaide.

“They have this light-sensing ability in their tail in order for them to know or sense where their tail is at any time. It keeps them hidden from sharks and other predators.”

The olive sea snake usually grows to about 1m but can reach twice that length. It is one of only three of the 60 sea snake species, and the only one of more than 10,000 reptile species, known to respond to light on the skin in this way, says Crowe-Riddell.

“Using RNA sequencing, we could tell which genes are actually active when you shine a light on the skin,” she said. The team found that the rare ability resulted from a gene linked to melanopsin, a protein normally used by animals to sense overall light levels in their environment.

Some amphibians such as frogs have the protein in their skin, but use the information it provides to change colour rather than to move away like olive sea snakes. Other animals, including humans, use it to sense light levels and regulate their sleep-cycles.

“The same thing has evolved in some long-bodied fish and some forms of salamanders that have long bodies and paddle-shaped tails,” said Crowe-Riddell.