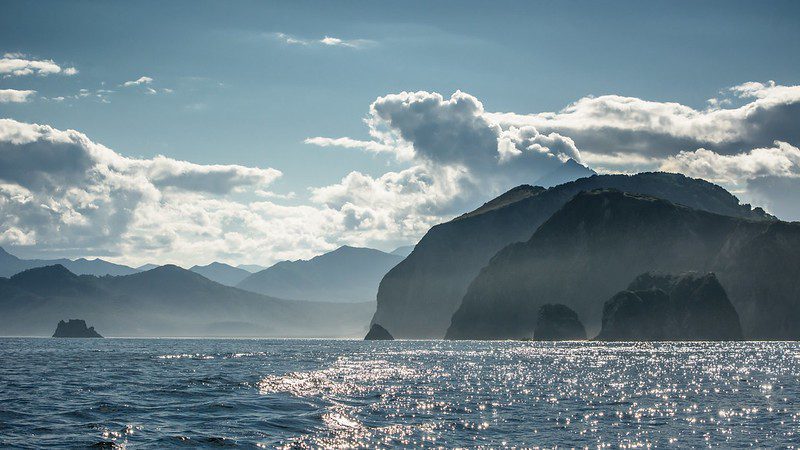 All but 5% of seabed marine life over a wide area of the Kamchatka peninsula coast in eastern Russia appears to have been wiped out – but the cause remains unclear.

The problem was first noted by surfers at the local Khalaktyrsky beach, as sea creatures such as seals and cephalopods started washing up dead on the region’s shores.

Now staff from Kronotsky Nature Reserve have reported back from a diving expedition on 6 October, accompanied by specialists from oceanography institute KamchatNIRO and the Pacific Institute of Geography.

While there were few signs of dead marine mammals or birds at the surface, a dive carried out near the mouth of the Nalycheva River had come as a shock.

“When diving we found that at depths from 10-15m there was massive death of benthos life – 95% of seabed-dwelling organisms were found to be dead. Some large fish, shrimps and crabs had survived, but in very small numbers.”

“Water samples were taken directly in the Nalychev River,” said Usatov. “No animals were found there. As for Cape Nalychev, we recorded uncharacteristically dark water in the bottom layers, with brown foam and a very poor environment in terms of animals.”

The divers visited locations covering a 25-mile stretch of coastline.

During a further dive in the area of ​​Starichkov Island and Salvation Bay, seabed-dwellers were again found dead on a “massive scale”, and it seemed likely that the contaminated area was much wider than that surveyed.

“After the dives, I can confirm that there is an environmental disaster,” commented underwater photographer Alexander Korobok, who said that while diving in Salvation Bay he had suffered apparent chemical burns. “The ecosystem has been undermined significantly, and this will have long-term consequences, as everything in Nature is interconnected.

“Yes, there were live crustaceans but they have a protective shell that other bottom-dwellers lack. In the long term, they’re likely to die as well.”

Expedition members believed that the scale of the disaster would get worse as those creatures that would normally feed on the bottom-dwellers died in turn.

The samples taken have been sent for investigation to laboratories in Vladivostok and Moscow. “Now we see the consequences, but do not understand the reason,” said Governor Solodov.

Explanations advanced for the disaster include an algal bloom, a tanker spill, though there is no supporting evidence; seismic activity recorded on 15 September releasing gases that might have formed acids once in contact with oxygen; lethal waste discarded by Russian nuclear submarines on training exercises; local pesticide storage facilities; and stored rocket fuel from a Soviet anti-aircraft base closed in 1990 without being completely cleaned.

Russian law-enforcement agency the Investigative Committee has launched a criminal investigation, after the Environment Ministry had initially downplayed reports of an “ecological catastrophe” by international environmental groups.