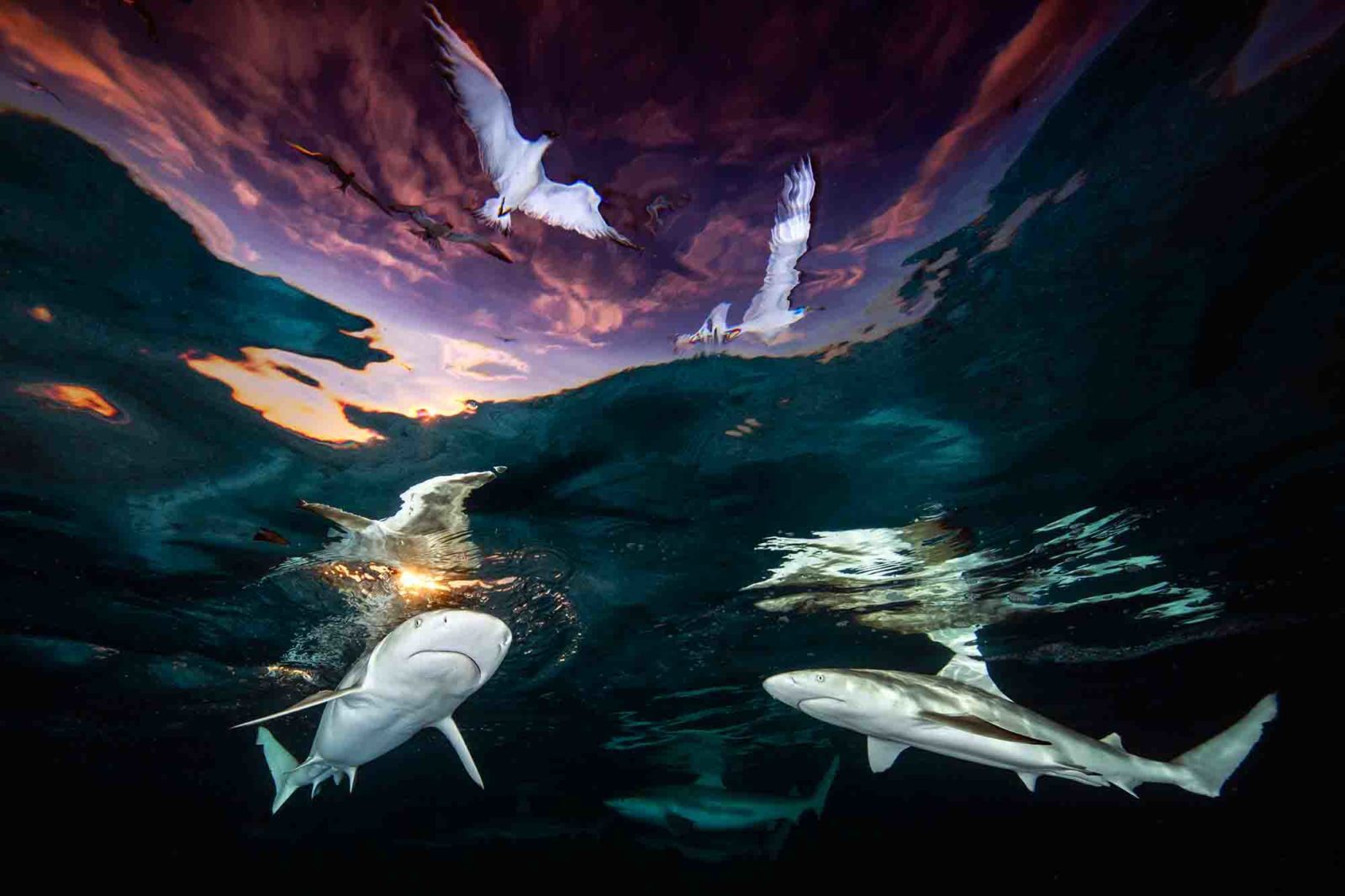 Her entry triumphed over 4500 underwater pictures entered by underwater photographers from 68 countries and makes her the first female photographer to be named overall winner of the prestigious UK-based annual contest.

Capozzola captured the image while diving off the tiny Pacific island of Moorea in August 2020. “French Polynesia strongly protects its sharks; it’s my favourite place to photograph them,” she said. “I dedicated several evenings to photographing in the shallows at sunset, and I was finally rewarded with this scene: glass-calm water, a rich sunset, sharks and even birds.”

“This is a photograph of hope, a glimpse of how the ocean can be when we give it a chance, thriving with spectacular life both below and above the surface,” commented Alex Mustard, who chaired the judging panel that also included Peter Rowlands and Martin Edge.

“The photographer not only persevered until this serendipitous scene unfolded, but more importantly Renee had the talent to capture this precise moment,” he said. “The gorgeous lighting is sympathetic, but the picture is made by the elegance of the composition as sharks, sunset and seabirds fleetingly converge.”

Mark Kirkland from Glasgow was named British Underwater Photographer of the Year for his inner-city wildlife vision “While You Are Sleeping”, taken in a local pond that fills with frogs over a few winter nights each year. It was taken in early March 2020.

US photographer Karim Iliya claimed the title Marine Conservation Photographer of the Year for “Crowded Island”, an aerial view of a small island in Panama representing over-population and the pressure it exerts on the sea. This was the first time an above-water picture had triumphed in this category, the only one in which they are permitted.

And SJ Alice Bennett, who comes from the UK but lives in Mexico, made her mark as Up & Coming Underwater Photographer of the Year 2021 for “Tying In”, an image of divers exploring a cave. The judges said it had a contemporary feel and relied on both advanced scuba diving and photographic techniques.

British photographer Phil Smith was the first Underwater Photographer of the Year, named in 1965. Today’s competition has 13 categories, testing photographers with themes such as Macro, Wide Angle, Behaviour and Wreck photography, as well as four categories for photos taken specifically in British waters.

“Judging this year’s competition was a pleasure, a much-needed escape into the underwater world,” said Mustard. “I hope everyone enjoys immersing themselves in these fabulous images.”

You can find details of all the successful entries at the competition website.

The winners will also be showcased, along with the judges’ comments, in the April issue of DIVER magazine, out in mid-March.