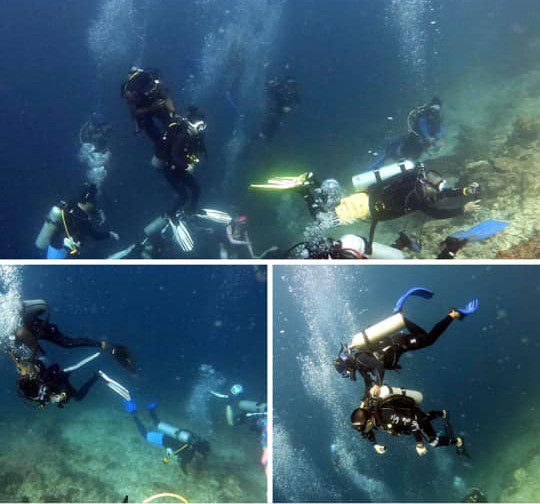 Malaysia’s only oceanic island Sipadan is known as one of the world’s leading dive locations, and diving there is subject to a quota system. However, the Semporna Professional Divers Association (SPDA) has had to address claims that untrained divers are being allowed to visit the island since restrictions were relaxed earlier this year.

The Sabah Parks authority increased the number of daily Sipadan diving permits by 47% in May, from 120 to 176.

The New Straits Times picked up the story after diver Kelly Gibbs complained on the SPDA’s Facebook page about “divers who can barely swim being dragged around by their tanks by divemasters” at Sipadan’s South Point site.

She posted photographs of the underwater scene, “taken at around 18m depth with a decent current that changed direction twice”.

Gibbs said she didn’t think the divers had been on a Discover Scuba dive because she had also seen them at other sites. Other posters suggested that the divers might have been recently or badly trained, with the divemasters guiding them to reduce risk of damage to corals.

SPDA President Abdul Razak Ismail said that there should be no Discover Scuba sessions for non-divers at Sipadan, and that qualified divers should undertake a check-dive a day before visiting the island.

Divemasters could then “choose appropriate sites based on the competency of divers,” he told the paper, adding that divers with poor buoyancy control were likely to damage marine life and to be at risk themselves in Sipadan’s sometimes strong currents.

Dive-operators should aim to hire local divemasters, but visiting guides should also be required to undertake check-dives and be briefed on the conditions before being allowed to bring guests to Sipadan, said the president. Operators preferred divemasters from overseas because they cost less than professional local guides, he added.