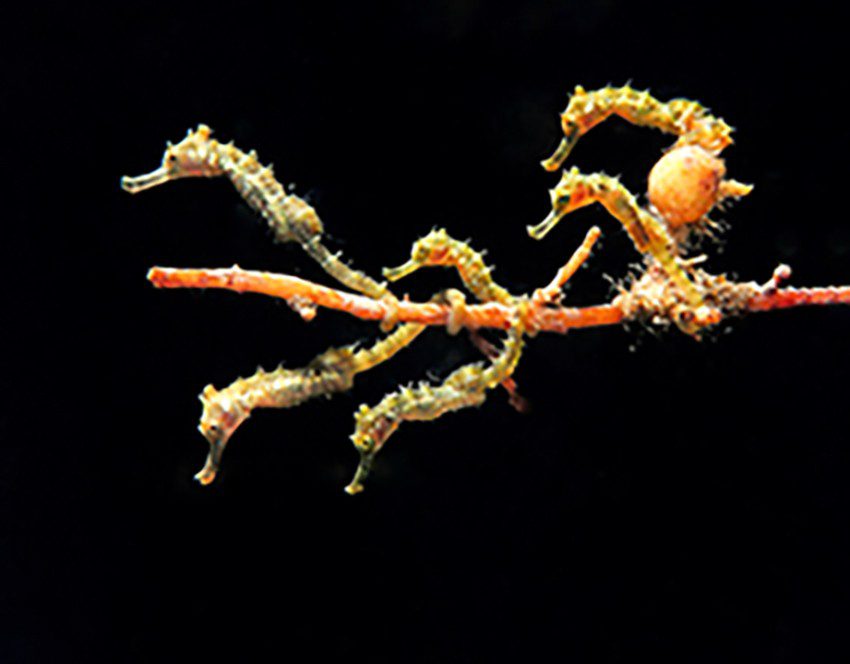 This extraordinary photograph of six baby seahorses was not the Best In Show in the latest Ocean Art competition but it came very close – topping the Novice Macro category and winning Julie Casey the title of Rising Star Photographer.

“I’ve been taking videos of baby seahorses for about three years but only recently changed over to stills photography,” said Casey. After buying a secondhand Olympus TG-4 point-and-shoot camera last year she said she had “spent almost every day in the water with it since”.

She took her winning image, Seahorse Bus, at Blairgowrie Marina in Victoria, Australia. The site has become a popular nursery for the birth of these shorthead as well as bigbelly seahorses, and Casey said she had seen as many as 20 babies sharing the same weed.

“You only have a short window of opportunity to capture this, because their survival rate is so low,” she said.

Casey described capturing six baby seahorses all facing in the same direction as “an extremely challenging shot. These babies will often pull in different directions and face away from the camera. So I’m absolutely delighted to be able to share such a split-second in time before this scene changed dramatically.”

The US-based Underwater Photography Guide (UPG), which organises the Ocean Art Underwater Photo Competition, says that the eighth annual contest attracted “an extremely high calibre of photos” and 2019 proved to be “one of the most competitive years to date”.

The judging panel, expert photographers Tony Wu, Martin Edge, Marty Snyderman and UPG publisher Scott Gietler, were said to have evaluated thousands of entries from 78 countries before selecting the final set of winning images in a total of 16 categories.

More than US $85,000-worth of prizes have been awarded, which UPG says makes Ocean Art one of the world’s highest prize-value underwater photography competitions.

The Best of Show picture showed a crab-eater seal manoeuvring through freezing waters under Antarctic ice and was taken by previous award-winnning photographer Greg Lecoeur.

“I continue to be amazed by the wonderful images that today’s underwater photographers are producing,” said Gietler. “The two new categories, Conservation and Blackwater, were true stand-out categories, especially Conservation – the winning images produce powerful emotion, and will influence a new generation of ocean conservation.”

Winning and highest-placed photographs in all categories can be seen here.

Winning photos will also appear in print in the March issue of DIVER magazine.