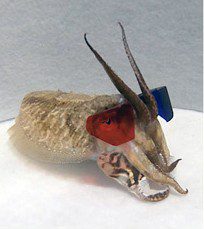 Scientists keen to learn how cuttlefish are able to see in 3D have fitted them with stereoscopic red and blue spectacles – and found that, while their eyes might be very different from those of humans, their way of seeing is not so different.

The University of Minnesota-led research team built an “underwater cinema” at the Marine Biological Laboratory in Woods Hole, Massachusetts, to investigate how the cephalopods determine the correct distance from which to strike moving prey. Cuttlefish use their tentacles to catch their quarry, and if they’re positioned too close it might be alerted and escape. Too far, and the tentacles will fail to reach.

The common cuttlefish (Sepia officinalis) were trained to wear 3D glasses and strike at images of two different-coloured walking shrimp displayed on a computer screen.

By offsetting the images, the researchers were able to determine that the cuttlefish were using stereopsis, a technique also used by humans, to compare images between their left and right eyes and compute the distance to their prey.

Depending on the offset, the cuttlefish would perceive the shrimp to be either in front of or behind the screen, and so would strike too close to, or too far from, the screen.

“When only one eye could see the shrimp, meaning that stereopsis was not possible, the animals took longer to position themselves correctly,” said Trevor Wardill, assistant professor in the university’s College of Biological Sciences. “When both eyes could see the shrimp, meaning that they utilised stereopsis, it allowed cuttlefish to make faster decisions when attacking. This can make all the difference in catching a meal.”

“While cuttlefish have similar eyes to humans, their brains are significantly different,” said assistant professor Paloma Gonzalez-Bellido. “We know that cuttlefish brains aren’t segmented like humans’. They do not seem to have a single part of the brain – like our occipital lobe – dedicated to processing vision.”

She said that the research indicated that the cuttlefish brain must contain an area that computes differences between images from its left and right eyes.

Unlike related squid and octopuses, cuttlefish can also rotate their eyes to a forward-facing position and, it’s believed, could be the only cephalopods able to use stereopsis. The only other invertebrates known to use the technique are mantises.

“This study takes us a step further toward understanding how different nervous systems have evolved to tackle the same problem,” said Rachael Feord of the University of Cambridge, first author of the study, which has just been published in Science Advances.

“The next step is to dissect the brain-circuits required for the computation of stereopsis in cuttlefish, with the aim of understanding how this might be different to what happens in our brains.”