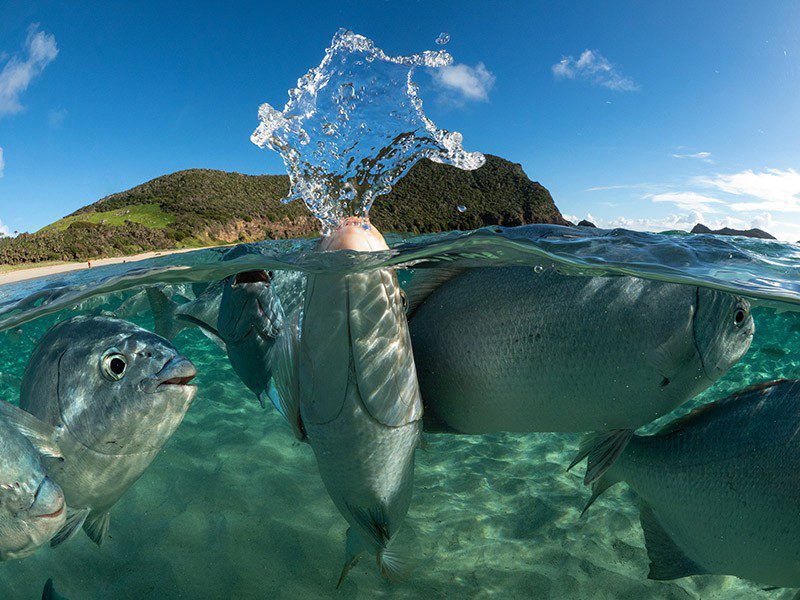 This photograph entitled Spurt, taken by Australian diver Scott Portelli, has been named Best in Show in the annual DPG (Dive Photo Guide) / Wetpixel Masters competition. The international online contest is described by its US organisers as “the Super Bowl of underwater-imaging events”.

The other categories are Macro Traditional‚ Macro Unrestricted, Wide Angle Traditional and Video, the “unrestricted” categories having no specific rules regarding digital manipulation. The competition is open to underwater photographers and videographers at all levels.

It shows emperorfish off Lord Howe Island jostling for position among a school of silver drummer, one spurting water to distract other fish from nabbing food fed to them by tourists.

“This is that moment we might see but rarely capture,” said Doubilet. “This is literally crystal-clear behaviour.”

“Nailing a split-shot is difficult, and adding a behavior is the cherry on top,” said Tuason, while Wilk described the image as “what we all strive for as photographers: a painfully common subject, captured in an absolutely unique way. The combination of eye contact, dynamic behaviour and technical excellence make this a clear winner.”

The Masters sees around US $55,000-worth of prizes awarded to the winners, and Portelli won a 12-night cruise for two to Triton Bay, West Papua on the Seven Seas liveaboard.

The winners were announced live on stage during the Wave Film Festival in Chicago.

Find the other winning shots here.