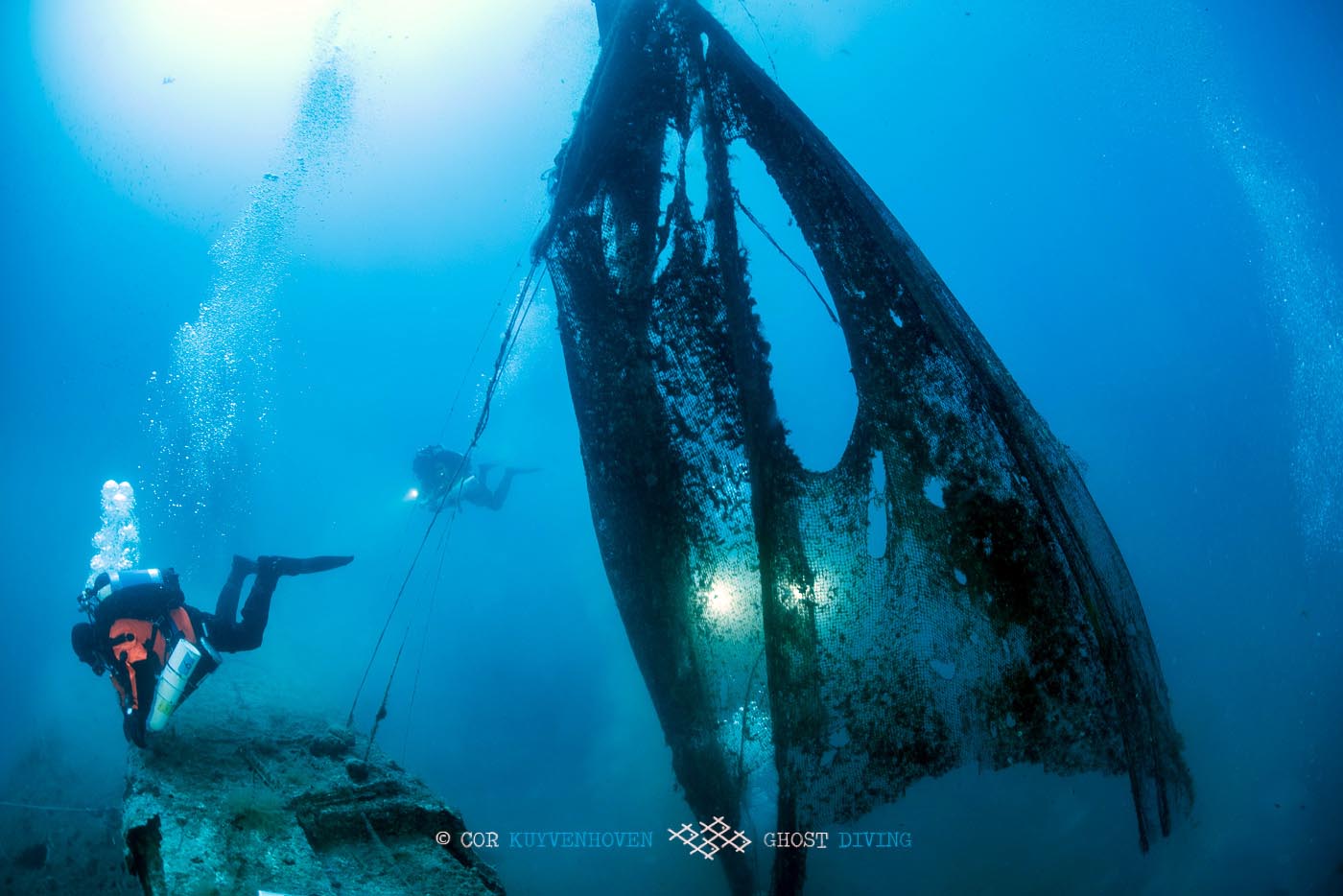 The wreck, a cultural heritage site, lies at a depth of 52m between the Greek islands of Kefalonia and Zakynthos, and the divers’ prime objective was to protect marine life from getting tangled in the netting and line. Visitors to the site were said to include loggerhead turtles, dolphins and rare monk seals – which happened to put in an appearance while the team were at work.

Millions of animals are reckoned to die each year by getting trapped in lost fishing-gear, says Ghost Diving. Set up in 2009 and formerly the Ghost Fishing Foundation, the organisation was the first and says it remains the biggest such international dive team.

The divers, supported by members of Aquatic Scuba Diving Club of Kefalonia, carried out three 65-minute dives on HMS Perseus between 22 and 26 July.

First came a thorough survey dive, after which the team decided to focus on the conning-tower and the fore outer hull. They reported that the task was made more challenging by the many long-lines that had become entangled with the nets over the years.

On the second dive the team managed almost to clear the conning-tower of nets, revealing the original structure. On the final dive they removed a large piece of netting that had covered the outer hull, extending to the seabed, and reported that everything had gone as planned.

The team also cleared other wrecks in the same depth range during the five-day operation, recovering a total of half a tonne of ghost-gear.

HMS Perseus, one of the largest WW2 submarines, is well-known because of the story of sole survivor John Capes. He escaped through the hatch after the submarine had hit an Italian mine and ended up on the seabed.

Capes survived the journey to the surface, a five-mile swim to Kefalonia and 18 months as a fugitive. The story is told from a scuba diver’s perspective on Divernet.

The underwater clearance was organised by Healthy Seas, which arranges the recycling of recovered nylon net into Econyl yarn, used to make swimwear, sportswear, socks and carpets.

Since it was founded in 2013, Healthy Seas says it has collected some 460 tonnes of fishing nets with the help of volunteer divers and fishermen. But it also says that every year another 580,000 tonnes of fishing-gear is abandoned at sea.

Alongside the underwater operation, Healthy Seas organised a public event on Kefalonia to raise awareness of marine pollution and ghost-nets. See more images of the Perseus before and after the ghost-gear was removed in the September issue of DIVER.