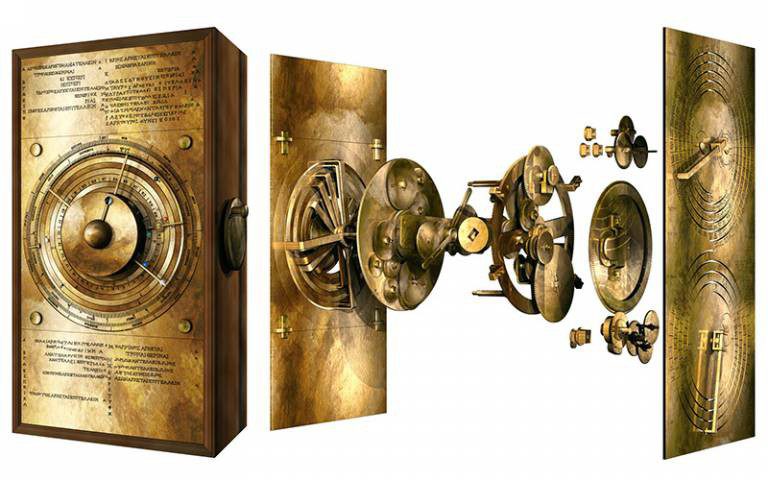 It was one of the most significant discoveries ever made at a shipwreck site: the 2000-year-old Antikythera Mechanism, retrieved by sponge divers in Greece 120 years ago, is reckoned to have been the world’s first-known analogue computer. But it was incomplete, and its workings have baffled scientists ever since.

Now researchers at University College London (UCL) report that they have solved a major piece of the puzzle, and could now be in a position to recreate the bronze device, the most complex piece of engineering to have survived from the ancient world, as it originally worked.

The divers, working off the island of Antikythera, retrieved a single aggregation that was later found to contain some 82 pieces of the device in the remains of a wooden box, but around two-thirds of it were never found. The Antikythera Mechanism is kept at the National Archaeological Museum in Athens.

With its intricate combination of 30 surviving bronze gears, the mechanism was designed to predict astronomical events such as eclipses, lunar phases, planetary positions and even propitious dates for the Olympic Games, but the mystery lay in exactly how it was able to do this.

A new study by the multi-disciplinary UCL Antikythera Research Team has revealed that a complex gearing system at the front of the mechanism is in fact a display of the ancient Greek order of the universe, or cosmos.

The biggest surviving fragment included bearings, pillars and a block, while another featured an unexplained disc, a 63-tooth gear and a plate.

X-rays had previously revealed thousands of text characters hidden inside these fragments, including a description of a display of the cosmos, with planets indicated by beads moving on rings. The team had set out to reconstruct this display.

Two key numbers among the inscriptions appeared to represent cycles of Venus and Saturn. “The classic astronomy of the first millennium BC originated in Babylon, but nothing in this astronomy suggested how the ancient Greeks found the highly accurate 462-year cycle for Venus and 442-year cycle for Saturn,” said researcher Aris Dacanalis.

Using an ancient Greek mathematical method, the team not only managed to explain how the cycles were derived, but also recovered those of all the other planets, even though the evidence for these was missing.

The researchers created “innovative mechanisms for all of the planets that would calculate the new advanced astronomical cycles and minimise the number of gears in the whole system, so that they would fit into the tight spaces available”, said Prof Tony Freeth, lead author of a paper now published in Scientific Reports.

The team now plan to reconstruct the entire Antikythera Mechanism using only the type of techniques that would have been available in ancient times.