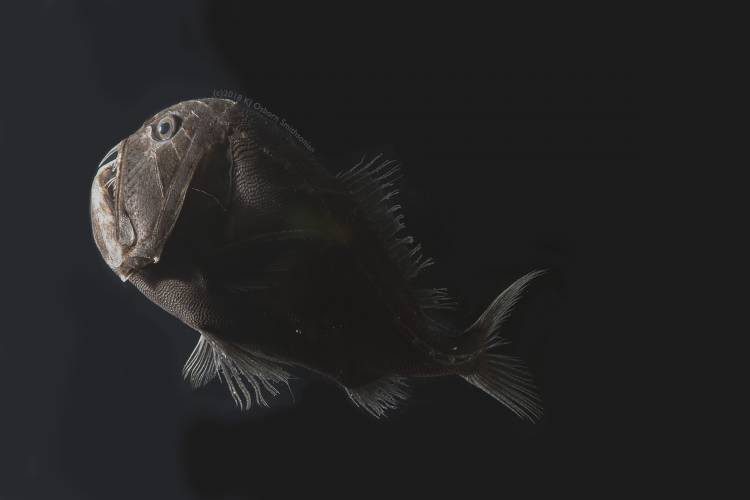 The ultra-black skin that renders some deep-sea fish invisible to prey is the subject of a new study by US scientists – who hope to replicate its light-trapping properties in applications ranging from solar panels to telescopes.

In the deep ocean there is no natural cover but there is still light – it’s created by the bioluminescent organisms that use it to hunt.

So at least 16 species of fish have evolved skin so black that it absorbs more than 99.5% of light. This makes them some 20 times darker and less reflective than everyday black objects – and almost impossible to detect.

Completing their vanishing act, the fish also have near-invisible nanocrystalline teeth, as found in separate US research on deep-sea dragonfish and reported on Divernet last year.

A research team from Duke University and the Smithsonian National Museum of Natural History collected 39 ultra-black fish from around a mile down in Monterey Bay and the Gulf of Mexico, using an ROV and a trawl-net.

The darkest specimen found was a tiny Oneirodes anglerfish from which a mere 0.044% of light reached the human eye, a result previously matched in Nature only by the feathers of Papua New Guinean birds of paradise.

The fishes’ skin-cells comprise microscopic packets of pigment called melanosomes, and these were discovered to be longer in shape and more tightly packed together than those of the sort of black reef fish familiar to scuba divers.

The researchers used a spectrometer to measure the amount of light reflected off the fishes’ skin, and an electron microscope to analyse the melanosomes, which computer-modelling confirmed to have the optimal geometry for swallowing light.

This property caused a problem when trying to record the fish through photography. “It didn’t matter how you set up the camera or lighting – they just sucked up all the light,” commented Smithsonian research zoologist Karen Osborn.

Alexander Davis of Duke was lead author of the study, which is published in the journal Current Biology.