What’s that sound? A diving penguin!

What’s that sound? A diving penguin! 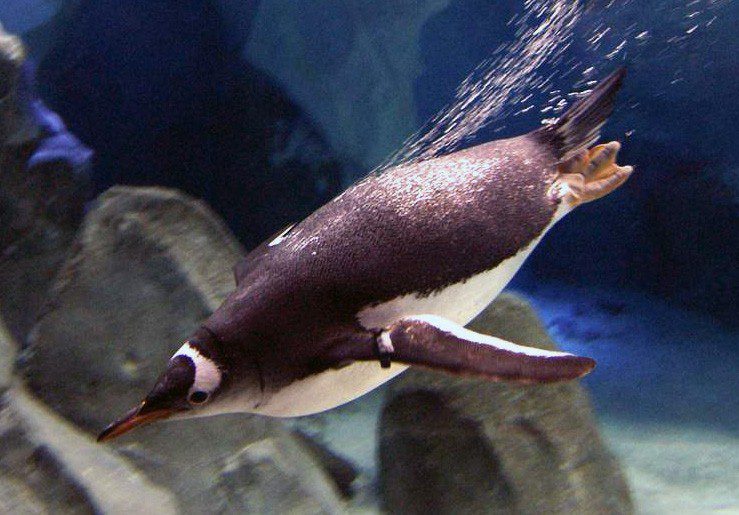 Rarely do scuba divers get to witness penguins hunting under water but if you should be lucky enough to do so, have a listen. The first evidence has just emerged that the seabirds vocalise while they’re diving for food.

Penguins are like all seabirds in being highly vocal on land, which helps them to recognise and communicate with mates and kin during breeding season. However, they spend the rest of their lives at sea where, unlike most seabirds, they are equipped to carry out often extreme dives while hunting for fish, krill or squid.

A team of researchers led by Andrea Thiebault from the Marine Apex Predator Research Unit (MAPRU) at South Africa’s Nelson Mandela University took advantage of recent technological developments to carry out research that would previously have proved challenging.

They caught specimens of three species of penguin – king, gentoo and macaroni – as they headed out to sea from their breeding colonies at Marion, a sub-Antarctic island off South Africa. They then attached miniaturised video-loggers with built-in microphones to their backs and let them go.

The species were selected for their diversity of feeding strategy. King penguins venture as deep as 200m in search of fish, while macaronis feed mostly on schooling krill no deeper than 10m, and gentoos pursue a variety of prey at a range of depths.

When the cameras were retrieved after a single foraging trip, the results surprised the researchers.

They had captured 203 underwater vocalisations from all three species over almost five hours of underwater footage. Most of these (168) came from the gentoos, with 34 from two king penguins and just one from a macaroni penguin.

All the vocalisations were short and emitted during hunting dives, 73% of them during the “bottom-time” rather than on descent or ascent. More than half were directly associated with hunting behaviour, immediately after the penguin had accelerated in pursuit of prey or straight afterwards, and the vocalisations were more numerous among those penguins feeding on fish.

Now the scientists want to find out how penguins are able to produce such sounds given the high pressure at depth.

They also want to understand their purpose, whether they are signalling the same information and whether they produce other underwater sounds in different contexts.

Possibilities are that the sounds are used to help the birds adjust their buoyancy, to startle their prey or to fulfil a social function with other penguins.

The study is published in Peer J.