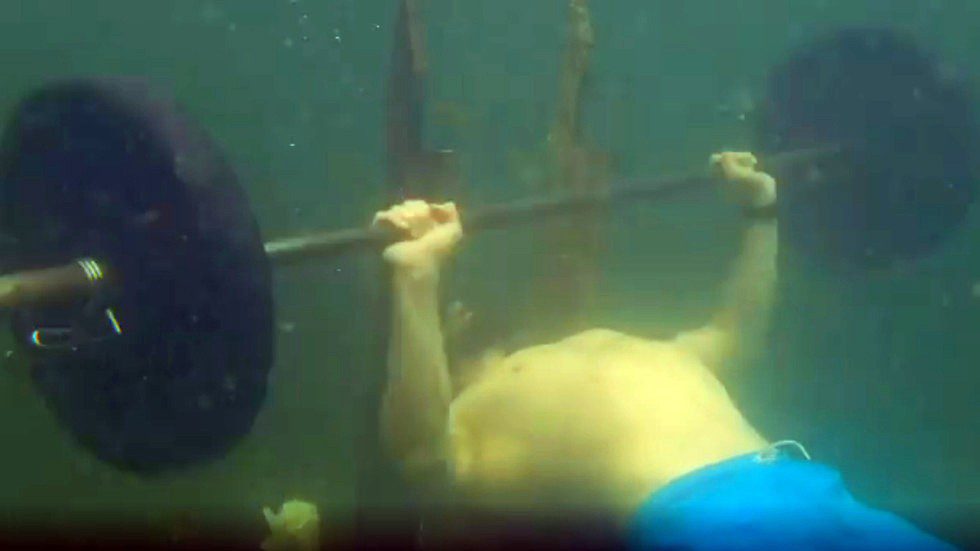 A Russian professional weight-lifter and amateur freediver is claiming a Guinness World Record for bench-pressing a 50kg barbell 76 times beneath lake waters on a single breath.

Vitaly Vivchar trained for two months to perform the feat at Lebyazhye Lake near his home-town of Tomsk in southern Russia on 13 August.

He said his best result while training had been 65 repetitions – just enough to beat the existing GWR record for “Most Consecutive Bench Presses Underwater”. That is held by Greg Wittstock of Illinois, USA, who pumped out 62 reps last October.

Vivchar, a Russian and Eurasian bench-press champion, said that his record attempt had conformed to GWR requirements, though it has yet to be verified.

The same applies to a claim for a Guinness World Record for an ocean clean-up event organised in Taiwan on 15 August.

A total of 591 scuba divers participated in the event, claimed to be the largest gathering of divers in an ocean clean-up within a 12-hour period. Organised by the Discovery Channel working with Keelung City government to raise awareness of ocean pollution, the main event was held in the city’s Chaojing Park while others took place at different locations across Taiwan, including Taichung, Tainan and Penghu County.

According to Discovery, 920kg of rubbish per hour was being collected off Keelung City. The 12-hour event over a range of dive-sites appeared to be a bid to create a new GWR category.

In July last year, Florida dive-centre Dixie Divers organised an event at the state’s Deerfield Beach in which 633 divers set the record for “Largest Underwater Clean-up in 24 Hours”. With all divers working at the one site, the operation was completed in 150 minutes and 544kg of collected rubbish was later recycled.

“According to locals, the clean-up has significantly improved the water quality for marine life in the area, and residents are hopeful that it will increase populations,” said Guinness World Records, which verified the record and called for more environmental record attempts.