A manta ray called Mathilde was just one big reason why SIMON MORLEY will never forget his recent trip to Socorro, San Benedicto and Roca Partida – the main Revillagigedo islands 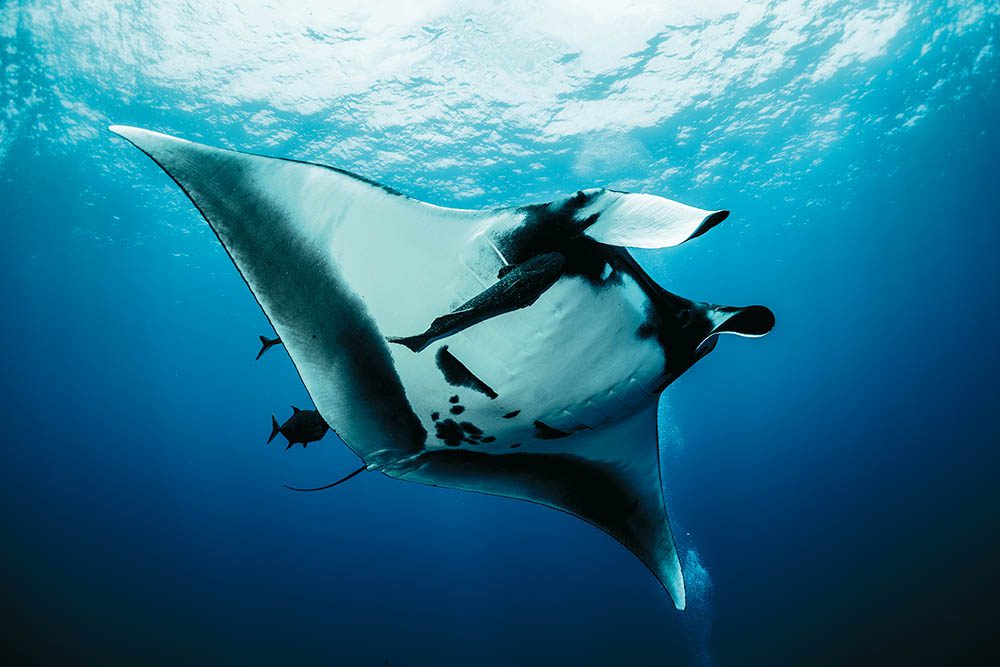 “WHAT BEER DO YOU WANT TO DRINK?” is not a question you commonly get asked when you get back on a RIB after finishing your diving for the day, but in this instance it was a welcome one. It’s little things like having a cold beer or a hot chocolate waiting for you that makes diving from a liveaboard such a pleasure.

Also making this trip a pleasure were the encounters to be had with the local wildlife, in this instance some of the most spectacular I’ve had anywhere in the world.

The Revillagigedo Archipelago is a group of volcanic islands in the Pacific Ocean, known for their unique eco-system and sometimes referred to as Mexico’s “little Galapagos”– and with very good reason.

We were visiting the remote area aboard Belle Amie, the largest boat in the Nautilus fleet, with spacious cabins, large dive-decks, dedicated camera-tables and several excellent, freshly prepared meals each day to make up for the calories that are bound to be burnt off during multiple daily dives.

OUR BIG ANIMAL ENCOUNTERS had commenced before reaching the Revillagigedos, however, with a short boat-ride out of the departure point of San Jose del Cabo for several dives with the sea-lion colony at Los Islotes.

As you prepare to roll off the RIB, the sound of the sea-lions barking to one another is deafening, and you go on hearing it quite clearly once under the water. It wasn’t long before we were joined by our pinniped friends, speeding past us in a blur like torpedoes, getting a feel for us and what we were up to.

Stay shallow, wait patiently and they will come to you. Once they were comfortable with our presence, they were more than happy to play with us, performing barrel rolls and loops around us and chasing each other.

A game of hide and seek was consistently their favourite, sneaking up behind us to tug on a fin or a camera strobe. It’s always an amazing experience to dive with these curious critters, but this was just a warm-up for the main event.

Travelling 235 nautical miles south, we arrived at San Benedicto and our first stop, the Boiler. This site comprises two undersea pinnacles, one large and one small, some 50m apart and with multiple strong currents seemingly coming in from all angles.

AS SOON AS WE ROLLED into the water we could hear the dolphins chatting and laughing around us, but unfortunately they chose to stay in the blue, just out of camera range.

At around 18m there are a few balconies on which you can see whitetip sharks piled on top of each other, observing you as you pass, with the occasional giant moray undulating up the rock face, looking for its next meal. The tension was palpable. Would we see mantas? How many? Where were they?

As we made the passage between the pinnacles, being pushed every which way as we went, it wasn't long before the big boys turned up to join the party. I was so busy keeping an eye out in the distance that it took a few seconds to register the massive shadow soaring directly and just a few inches overhead. Mantas ahoy!

The first one was quickly joined by another, and soon they were taking it in turns to glide around us and play in our stream of exhaled bubbles in an exquisitely choreographed ballet.

It was a magical sight and we delighted in watching the swoops, turns and rolls as they displayed more grace and poise than we clumsy divers could ever hope to have.

OUR EXTREMELY LARGE FRIENDS seemed to revel in having people to perform before, apparently trying to outdo each other in terms of how close they could get to us, and the increasingly elaborate tricks they could pull off. We would have stayed down all day if we could, but no-deco limits were getting in the way.

One of the trip highlights of course is Socorro Island itself, which is on the itinerary and highly rated among divers the world over. If you’re lucky, and if weather and time allows, there is also an option to do a night snorkel with silky sharks. The conditions weren’t the best by the time the opportunity arose, but I wasn’t going to miss out.

The sharks are drawn to the floodlights of the boat, and at first you catch sight of just one or two cruising around you. Before you know it there are more than 20 darting here and there, curious about you, but at the same time cautious.

It’s pretty exhilarating to be in among so many sharks at the surface at one time, and I’ve never had a shark encounter quite like that one.

As the evening wore on, the weather rapidly deteriorated, and the captain wisely decided to move on rather than stay for the planned two days in the hope of being able to get in the water.

Sometimes, no matter how badly you want to dive, you just need to know when to knock it on the head and move on. There's always another day for a dive.

The highlight of the trip for us was in any case Roca Partida. It’s part of Mexico’s military zone, so we needed to obtain permits from the local naval base before we anchored up.

Roca Partida – or Split Rock – is about 100m long and rises into two peaks above the waterline. Seagulls and boobies make it their home (and their bathroom) but we were there for the action below the water. Again we had been scheduled to stay for two days and move on, but after the first few dives it became clear that this was the place to be.

The captain said he had never seen as many mantas and sharks there on any of his previous trips, so we voted unanimously to stay there for the remainder of the itinerary.

There are some serious currents at Roca Partida; it’s not somewhere to dive lightly, but the rewards are spectacular, with multiple shelves on which the whitetips can cluster, and large schools of Galapagos sharks and hammerheads regularly passing by.

ON TOP OF THIS, huge shoals of jack and tuna cruise around, and you can quite happily lose yourself among them, but don’t be surprised if the occasional shark sometimes comes gliding through the fish, seemingly out of nowhere, to check you out. It will then cruise off again, the fish parting and closing in around it like a shroud of silk.

Once again our very large pelagic friends came out to play with us, sometimes in singles or occasionally in pairs, doing their best acrobatic routines for our amazement and delight.

They must have known that we had cameras trained on them, because they were always eager to perform.

Each manta has unique markings and there was a catalogue on the liveaboard of all those known to frequent the area.

One particular ray called Mathilda always seemed to come to find us in the water. Whether this was because it was always just the two of us diving away from everyone else, so it tended to be nice and quiet, or whether she just liked the look of us, we don’t know, but Mathilda would follow us wherever

we went like a big puppy, demanding attention. If I’d had a ball to throw, I swear she would have gone to fetch it, wagging her tail.

Recent research has shown that mantas have the highest brain-to-body-mass ratio of any fish and display an exceptional level of intelligence.

The cephalic fins on either side of their head are not there only for funnelling plankton into the mouth, it seems – scientists believe that they are also used for communication.

Direct eye contact is also considered a friendly connection, and they do give every impression of enjoying the interaction. I would love to have known what Mathilda was thinking as she constantly followed us with those big, deep eyes, her fins curling and twitching every time she came in close to play in our bubbles, or just to pose for photos.

ON THE MEMORABLE last dive of the trip Mathilda was there by our side from the moment we entered the water, following us as we cruised round Roca Partida for the final time, soaking up the sights and capturing as many images as possible.

As our bottom time slowly ticked away and we were about ready to deploy our SMB, Mathilda glided right over to us and extended her wingtip towards me, brushing my hand as if to say a final farewell. It was something completely unexpected, unlike anything else in my diving experiences.

It’s not every day you get to make a new friend, especially one this big, but we’re glad we did. One day soon I hope we’ll be back to see Mathilda and all her relatives again. If I dived further, it was by diving on the shoulders of giants.

GETTING THERE> Simon Morley flew with Cayman Airways to Cabo San Lucas. There are also BA flights via Houston, with a short drive to the marina by shuttlebus.

WHEN TO GO> February to June and November-December are the best times for manta and shark experiences.

WHEN TO GO> On shore, US dollars, Mexican pesos and all major credit cards. Onboard charges can be paid by credit card or cash – park and port fees in cash only.

PRICES> Average flight cost from the UK is about £1000, and the liveaboard price for two people staying in a superior suite on the 10-day itinerary is £7200, plus port fees of US $65pp.