A nice little Channel wreck jaunt, and you never know what you might come across. In this case it wasn’t only shoes but a gold ring! STEFAN PANIS reports on a cable-layer with an interesting history 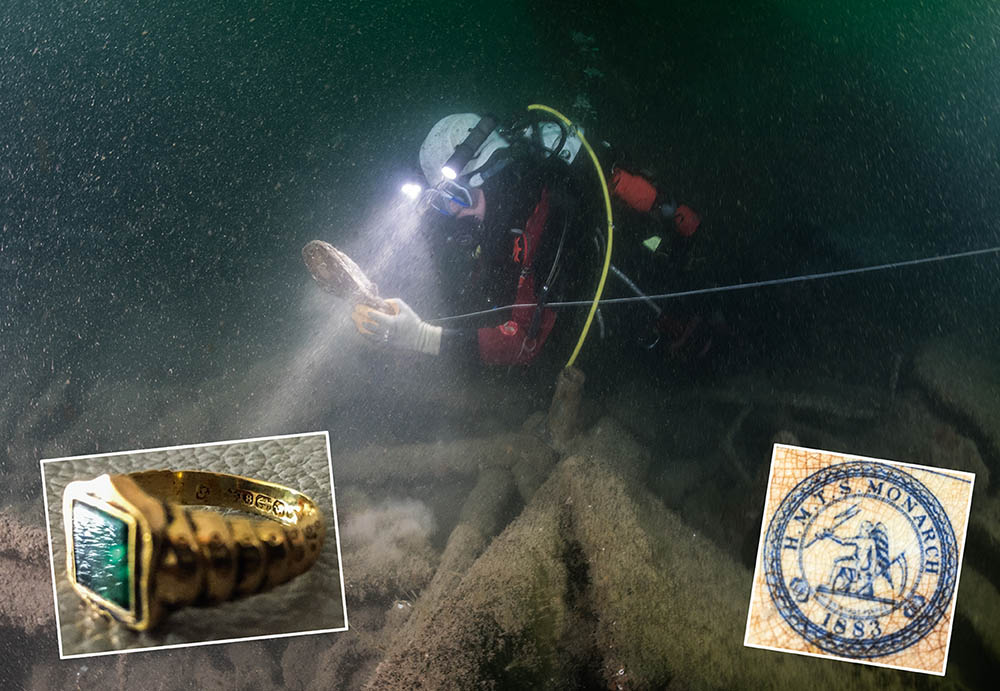 Tony Goodfellow picks up a shoe on the wreck of HMTS Monarch. Inset, left: Gold ring found by Eddie Huzzey. Inset, right: The ship’s emblem found on a shard of crockery.

JUST A WEEK BEFORE getting into a very busy time in my day-job, I received a call from my Dover buddy Eddie Huzzey. The upcoming tides were neap, and the visibility was quite good.

As Dover could be reached from my home in Belgium quite easily, I made up my mind quickly. I packed my diving gear and camera, and left for a few days of wreck-diving!

Eddie and Tony Goodfellow, the 78-year-old Channel diver and owner of the RIB Up and Under, asked me which wreck I wanted to dive. Not an easy question,

as I could choose from the hundreds off the coast around Dover.

So I asked to be taken to see something interesting, in an area where we would have a good chance of decent-enough vis to take pictures to document our dives.

Tony suggested the Monarch, an 1884 cable-layer and a ship with an interesting history. He had been diving the wreck for many years, and said some nice artefacts had been recovered in the old days.

The wreck lay in quite shallow waters (at about 28m) which, with the neap tides, would allow long bottom-times to fully explore the site.

HMTS Monarch, the second ship with this name at the time, was the first cable ship designed specifically for the General Post Office (GPO).

Originally conceived as a paddle-steamer with two engines for great accuracy of steering, with economy in mind a screw steamer was the final result.

SHE WAS BUILT and equipped by David J Dunlop of Port Glasgow in 1883 at a cost of £50,000, and was 73m long and 1122 tons gross. She carried a crew of 74, and the interiors were beautifully decorated, as witness the smoking room with its display of rifles and revolvers, or the saloon, where the walls bore carved American walnut panels. 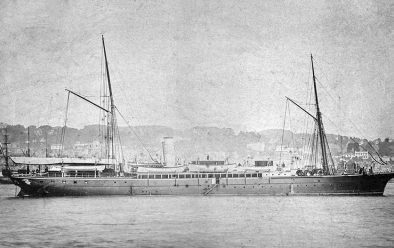 The ship was fitted with three cable tanks, two forward and one aft, with capacities between 76 and 186cu metres. Cones in the tanks were used for storing fresh meat and water, while storage for grapnels, ropes and other equipment was provided forward of No 1 tank.

The cable gear consisted of a combined paying-out/picking-up machine with two 1.8m diameter by 70cm-wide drums.

Each drum had its own brake, allowing picking up and paying out to be carried out simultaneously.

HMTS Monarch was launched into the Clyde at high water on 21 August, 1883, with the champagne bottle swung “gracefully” (according to the Glasgow Herald) by Mrs Anne Cunynghame, wife of Scotland’s Surveyor-General.

Six days later the Telegraphic Journal & Electrical Review reported under the heading “New Irish Sea Cable” that “The postal telegraph cable ship Monarch has left her moorings at Woolwich, having on board the new 4-wire cable, which is to be laid across the Irish Channel from the Welsh to the Irish coast.

“The overhead line between London and the Welsh coast in connection with the new cable is in course of construction; this line is being wired with copper conductors.”

Monarch served well for 32 years until, during WW1, she struck a mine laid by UC-5 while going through the gate in the defence boom off Folkestone.

According to an eyewitness the ship started to settle down by the stern immediately after the explosion, and in under three minutes only the forecastle head remained above water.

TONY SET THE HOOK into the wreck. When he had jumped in, I completed the pre-breathing checks on my rebreather and gave Eddie the signal to drop me at the anchor-buoy. The others hadn’t misled me; I could see that the visibility looked great at the site, only

a few miles out of Folkestone harbour.

Tony had clipped his reel to the shotline, and I decided to follow his line.

I swam over twisted metal beams and wheels that looked like parts of the cable-laying machine, probably fallen through the rotted main deck.

I met Tony swimming towards the bow, where I could see a spare or grapnel anchor on the foredeck. Tony noticed it only afterwards, when he saw the photos.

We swam past a hold containing the brass piping of the steam engines, then a series of bollards and the remains of the funnel, before proceeding towards the forward cable-tanks. These were still filled with cables, and I was amazed to see how big they were when Tony obliged by lending scale to them.

I TOOK A CLOSER LOOK at the cable while Tony had a rummage around. He pulled a shoe out of the debris. We took a few pictures, and swam towards the stern.

About midships, we came across the remains of the kitchen or dining area, where I noticed some shards of porcelain. I examined one and couldn’t believe my eyes, as I saw an emblem and the name and date of the ship – really cool!

I swam back with Tony to the anchor-line, and as I still had plenty of bottom time left, I decided to get a better look at the exterior of the wreck.

Through breaks in the hull, artefacts were spilling out. In a large debris field I saw bottles, another piece of crockery with the ship’s crest and a whole row of portholes, glass still intact.

These were still solidly attached to the metal plate, which seemed to indicate that part of the upper decking had collapsed next to the wreck.

Then I came to the stern, and saw the rudder and the propellor. This is where I think the ship hit the mine, as there was a lot of damage to be seen.

I took some pictures and drifted back to the shot, where Eddie was starting his dive. We exchanged OK signs as I started my ascent for a little decompression.

Later Tony helped me into the RIB and we discussed our dive, and what a good choice it had been. Then Eddie returned with a big smile on his face, holding in his hand something quite strange.

He dekitted, carefully opened his hand – and out of his glove came a beautiful gold ring with a big green stone.

He had dropped into a hold, and had just stumbled on this beautiful piece of jewellery, which was of course declared to the Receiver of Wreck the following day.

A great day in the English Channel!

Back home, I set about finding out more about the history about the Monarch. In the process I came into contact with Bill Burns, owner and publisher of atlantic-cable.com, a website dedicated to the history of Atlantic cable and undersea communications, from the first submarine cable of 1850 to the worldwide fibre optic network.

Bill was able to give me good information and pictures of the Monarch, and I provided him with some underwater shots to be added to his website – great teamwork!