The Schiedam Prize is a major 17th-century shipwreck that lies off the Cornish coast. Frustratingly, the shifting sands reveal its secrets only fleetingly, but mark milburn was lucky enough to be granted an unusually wide-open window into history 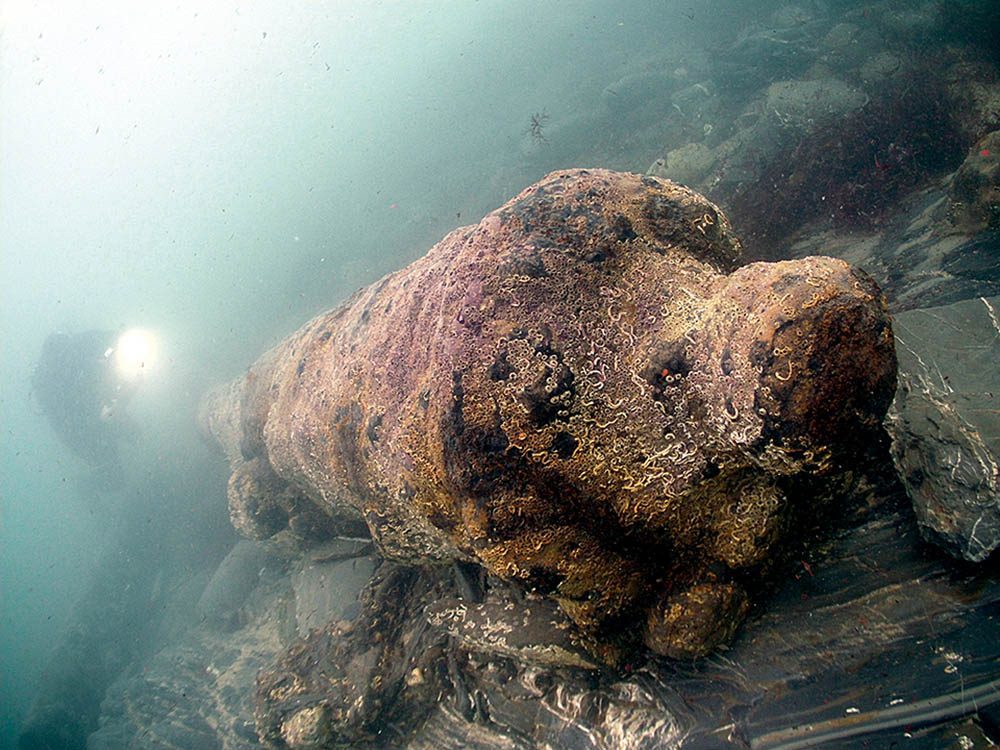 A diver investigates a 3m-long cannon.

THE STORY OF THE Schiedam Prize is quite well-known. She started life as a Dutch merchant ship, a flyboat, sailing between Spain and the Baltic. She was captured by Barbary pirates, the crew were enslaved, and the Schiedam became a pirate ship.

Two weeks later Captain Clowdisley Shovell, who later, as an Admiral, led an English fleet to disaster on the Isles of Scilly, captured the Schiedam from the Moorish pirates. The ship was then taken to Cadiz, where her cargo was removed.

The Schiedam “Prize” was then classed as a sixth-rate ship of the line and sent to Tangier. At that time, in 1684, Samuel Pepys was in that part of Morocco as a naval advisor, helping Lord Dartmouth to oversee the evacuation of Tangiers, keeping records of ships and their cargoes, and the Schiedam Prize was described as being of special interest to the famous diarist.

The vessel was loaded mainly with armaments, along with some decorative items, including marble and ornamental stonework.

She was also carrying labourers and their families, part of a workforce that had spent 20 years building a causeway to improve the harbour, a project that was never finished. She left Tangier with several other vessels in convoy back to the UK.

On her return, the convoy was dispersed in bad weather, and the Schiedam Prize found herself on the wrong side of the Lizard Peninsula in Cornwall. She ran aground at Jangye Ryn near Gunwalloe.

The locals came to her aid, some goods were recovered and no lives were lost. There was a lot of salvage at the time, including the masts, sails and some of the cannon, some of  which were bronze.

The wreck was rediscovered in 1971, and the site was said to contain 14 iron cannon and part of the ship’s structure. Since then, part of the site has been excavated and at least two cannon removed.

In 1982, the site was designated under the Protection of Wrecks Act, with the finder of the site as the licensee.

Most of the annual licensee reports since that time state that the site was covered in sand for most, if not all, of the year. A desk-based assessment written in 2013 states that in total 153 items have been recorded as recovered since 1971.

In 2011 I applied, and was granted, a license to visit and dive the site. Since then I have been there many times, but usually the conditions are unsuitable for diving. The beach off which the wreck lies faces south-west and is exposed to the full force of the Atlantic Ocean.

I had managed to dive the area a few times, but found only sand.

During 2016, I added to the licence David Gibbins, a maritime archaeologist and novelist I had befriended after we met on a shore-dive near Gunwalloe. David had moved quite close to the wreck-site, and could keep an eye on the conditions and sand levels.

After snorkelling the site a few times, he eventually saw what looked like a cannon. Then, on 19 July, 2016, we dived the site and saw three cannon as well as some concretions within which we could see a hand grenade and some musket-balls.

Since that time we have visited the site more often. Sometimes we see two or three cannon; sometimes absolutely nothing.

Hurricane Ophelia came and went during October 2017, and David waited for the sea to settle and the visibility to clear. Then he called, and told me that he had just snorkelled over the site and that there was no sand present.

The following day, three of us headed down to Gunwalloe armed with cameras and measuring scales.

There is another wreck-site close to that of the Schiedam Prize, and we swam there first, only to find it buried in sand. So we headed towards the Schiedam, waiting for our transits to line up.

IT WAS A LONG SWIM, but luckily it was one occasion on which I had remembered to bring my snorkel. We swam horizontal to the shore across the cove, and the seabed moved further away as the water became deeper.

One of the reefs was barren of sand, showing lots of gullies with loose stones on the bottom – a good place to trap stuff.

Eventually the transits lined up, and we stared at the seabed. At more or less the same moment, David and I exclaimed: “It’s here!”, and we descended.

The first cannon I saw was one we had seen before – we referred to it as Gun 3.

When we had seen it before all that had been visible was the top part of the muzzle, but now it lay completely exposed. Surrounded as it was by concretions, which contained a large number of hand-grenades, it was amazing to see it in its entirety.

I headed across to David, who was looking at another gun that we had seen before, the 3m Gun 1.

When we had seen it before it had appeared to lie on the sand, but now, with little sand around, we could see that in reality it had bonded to a rock, leaving the barrel almost a metre from the seabed and pointing out across the site.

Just below the cannon was a piece of timber, partially buried in some concretions. This had not been recorded as being seen before. And close to Gun 1 was a large spherical object, also bonded to the top of a rock.

A little further on lay a piece of marble with more timber next to it, another two items not previously recorded.

Next came the main cluster of four cannon, with two others close by. Within the concretions we could see some more marble, and even what appeared to be a bone, most likely from the horses that had been on board.

Across a low reef, we came across what we called Gun 2, another cannon we had seen often. Beside it we had once seen some concretions, with lead embedded in them, but this time we saw a very large area of concretion containing several pieces of lead, and perhaps some pewter.

Following Gun 2’s barrel out across the sand, we would sometimes see the top of some cylindrical object.

This time we again followed the line of the barrel, and this time there was no sand. The cylindrical object lay next to another that was identical, both completely exposed and sitting on rock.

I COULD REMEMBER seeing what looked like a wheel on an early drawing of the wreck. It had looked strange and hadn’t seemed to fit the site, drawn as if it was a compass.

I decided to see if I could find anything, and swam across a low rocky reef, then across some sand, and was eventually able to see a round-looking object.

As I got close I was able to make out spokes, and realised that they were still connected to the rim. It looked like a complete wooden-rimmed cartwheel although, still half-covered in sand, it was hard to tell.

I swam back to where I had started, our Gun 3 and the concretions around it. There was very little that could be identified within the area, apart from another piece of lead.

Heading towards the group of guns, there was a gully full of concretions, containing a lot of hand-grenades and musket shot within as well as a small piece of non-native stone embedded.

Near the end of the gully we could see another, larger, chunk of stone.

During the 92-minute dive, never getting deeper than 6.1m, we saw many new areas and items that had never been seen before. We also saw every one of the features I had seen on the early drawing.

There were two things we had left to do, although they would have to wait for another dive, because our air was too low by now. One job was to measure the large spherical object to find out whether it fitted in with the cylindrical items. If it did, it might help to explain what these things were.

The other job was to double-check the location of one of the cannon. I might have remembered the drawing incorrectly, or find that we had a new gun and another one lost. Everything else seemed present and correct.

When David and I were both free again, just three days later, we returned to the site to clear up the two mysteries. But when we got there it had gone, buried under the sand.

Now you see it, now you don’t.