In this extract from his new book Exploring Britain’s Hidden World, eminent marine biologist and diver Dr Keith Hiscock considers the dramatic changes that can occur on seabeds around the calendar year 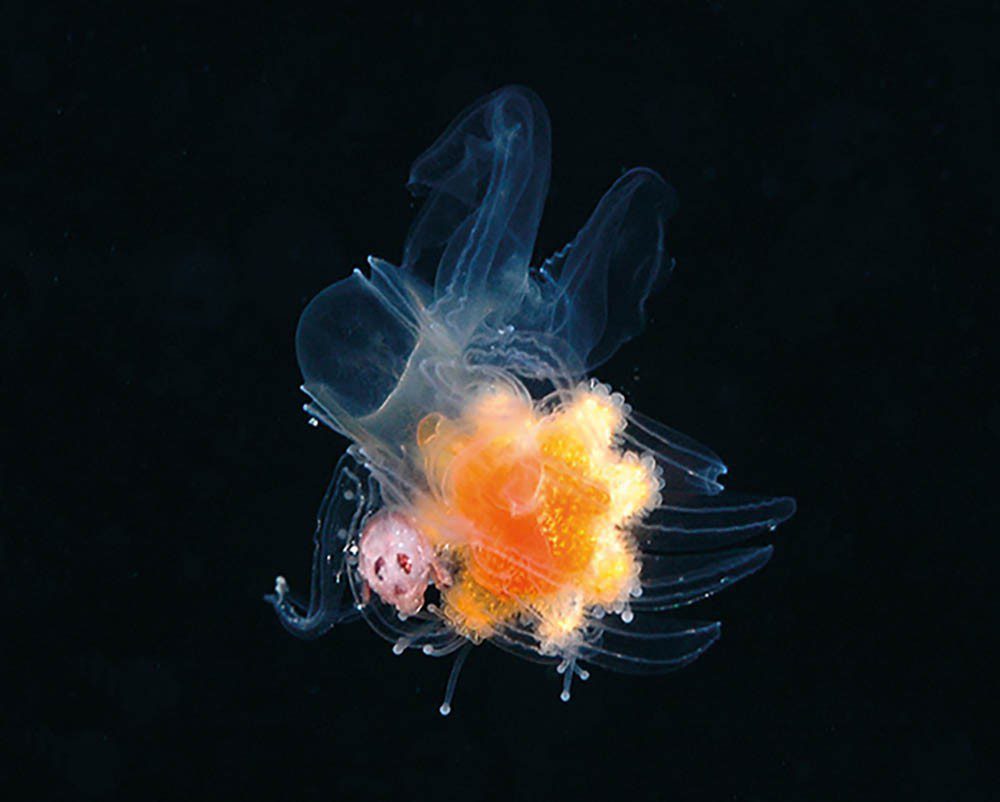 The larvae of seabed species are rarely visible to the naked eye but, by late summer, those of the genus Luidia are miniature adults and, surrounded by a gelatinous sheath, can often be seen in their thousands drifting past a decompressing diver. The larva here is accompanied by an amphipod crustacean, most likely Hyperia galba. It was photographed in the Isles of Scilly in early October.

WE ARE ALL FAMILIAR with the changes that occur in terrestrial wildlife and in garden plants through the year, and there are similar seasonal changes on and within the seabed.

In the sea, spring is a time for animals to reproduce and for new growth to occur while, in autumn, animals and plants mostly shut up shop ready for the winter.

The plants and animals colonising seabed habitats may also change in character, and even in respect of which species are dominant through the year. Some species are present – or present in large numbers – only at certain times of the year.

As on the land, those changes may not occur all at the same time (although mid to late winter and autumn are important times for change in the sea).

The changes described here are to give examples of what occurs, without in any way attempting to be comprehensive.

Whatever the differences in the abundance of seabed species at different times of year (and there may be none of significance in some habitats), the researcher undertaking surveys, and especially annual monitoring studies, needs to be aware that seasonal change occurs.

The following examples and images of seasonal changes in seabed species are from near my home base in Plymouth. It is also from Plymouth that much of our knowledge of the time of reproduction and settlement of animal species, at least, has been recorded.

The Plymouth Marine Fauna (last published in 1957 and now available online) is a treasure trove of information about the biology of seabed species.

Now, the Marine Life Information Network (MarLIN) website brings together such information as part of the catalogue of biological traits (published separately as Biotic) that help us to understand the life history of species and much else.

While many fish are still tucked away in fissures and crevices, the underwater gardens will be blooming. Clean, fresh seaweed growth (of both perennial and annual algae) will be showing itself and, of the attached animal species, it is the hydroids that are especially spectacular.

There will be new growth of antenna hydroids – soon to become like fields of grass in the underwater landscape.

Those bright red polyps may be short-lived if it is a good year for the sea-slugs that feed on them.

Many species spawn in the spring, creating larvae that might spend weeks or even months in the water column, dispersing to new locations.

Spring is a busy time for breeding and one of the much-anticipated events among scuba divers is the arrival of cuttlefish inshore to court, mate and lay their eggs from around the end of April into May.

Fish are much less conspicuous in their breeding habits but, by the end of April, male corkwing wrasse (Symphodus melops) will be building nests out of seaweed on suitable rock shelves and tompot blennies (Parablennius gattorugine) will be guarding their eggs under boulders or in fissures.

For many of the species that have produced larvae in spring, those larvae have spent their time in the plankton (if they have a planktonic larva) and have now settled onto the seabed. Some with long-lived larvae may still be settling and the echinoderms are especially likely to spend a long period in the plankton.

By the end of the summer, success for some species means problems for others. Algae are greatly covered by encrusting species that have settled during the summer, and it is time to shed fronds – or perhaps those damaged fronds just break up with wave action.

From late summer onwards, enigmatic gatherings of spiny spider crabs (Maja brachydactyla) occur. Their purpose seems to be to moult; there is protection in numbers, but many die. Thousands may occur together in mounds.

Autumn is a period of shut-down, migration, of loss due to predation or natural end-of-life which may start as early as September in some species.

Even before seawater temperature starts to fall after the end of September, some species will become inactive.

From January through to about September, colonies expanded and contracted their polyps several times during the day.

From about October through to December, the colonies remained contracted and did not feed. Often, the surface of the colonies became covered in a layer of species such as diatom algae and sea firs.

The season of prolonged inactivity coincided with the final months of gonad maturation and the shedding of the colonising species and re-expansion of polyps immediately preceded spawning.

In the football sea squirt (Diazona violacea) the change is more dramatic, as the feeding zooids of the larger colonies, at least, are shed in about October and new ones start to grow in about December.

By early November, seawater temperatures are just beginning to drop significantly; the autumn plankton bloom is coming to an end; annual seaweeds are being or have been swept away by storms; some perennial seaweeds are losing their fronds (eaten or broken up); some sea anemones and soft corals have become inactive until mid or late winter, and many sea firs are just dead stalks.

But, some species are showing the success of summer reproductive effort, and wrasse numbers in particular are likely to be high on shallow reefs before they seek shelter during the rest of the winter.

By midwinter (December and January), reefs are largely devoid of annual species and the broken debris of the summer extravaganza has been swept away.

Many territorial but resident fish have tucked themselves away into often-deep fissures and holes.

There are rarely the large numbers of highly mobile fish such as pollack (Pollachius pollachius) that occur in summer, and any grey triggerfish (Balistes capriscus) that found their way to Britain in the summer will be dead.

Despite the apparent inhospitality of winter, some species will be breeding and spawning or laying their eggs – perhaps in anticipation of a plentiful food supply later in the year.

Algae often show marked changes in abundance and condition over the course of a year. Some are perennial and are there all the time, including the kelp Laminaria hyperborea (cuvie) and such red algae as siphoned feather weed (Heterosiphonia plumosa).

Others, such as the large kelp Saccorhiza polyschides (furbelows) grow quickly in spring and early summer through to the autumn (by which time they are usually heavily encrusted with sea-mats) and then are swept away on the open coast by winter storms.

Some may survive into a second year, especially in sheltered conditions.

Sea beech (Delesseria sanguinea) is a perennial red alga that dies back to stalks in the autumn and starts to show the growth of new blades in about January.

The reasons for seasonal change are many, and are different for different species. In a paper entitled The Seasons in the Subtidal, Joanna Jones (Kain), who undertook work in the Isle of Man and Firth of Clyde, concludes: “There is clearly a mixture of factors causing seasonal change in subtidal algae; sometimes one is important and sometimes another.

“There is no evidence for temperature having particular importance but there is evidence for light being a frequent cause of change”.

Similar conclusions, but referring to different environmental factors, could be applied to many species that we know about. There are many more species for which we know little or nothing of growth, seasonality or persistence.

For many algae, spring comes early; as soon as the nights start to get shorter in length, they will begin to grow. For some animal species, winter closure also finishes early, perhaps in readiness for the plankton bloom in April and May.

Species such as dead men’s fingers (Alcyonium digitatum) and plumose anemones (Metridium dianthus) begin to expand rather than to be contracted. Often, the most spectacular shows of jewel anemones (Corynactis viridis) are in what would be considered winter (January and February) on land.

In this image, new growth of the perennial sea beech (Delesseria sanguinea) can be seen on the rails of ex-HMS Scylla in early February.

The mid-ribs of the previous year’s growth are still present.

Dead men’s fingers are fully expanded, in contrast to their closed period from about October through to December.

Britain’s shallow seas are a mysterious domain, says Keith Hiscock. They remain largely unseen and unexplored except by marine scientists and divers. 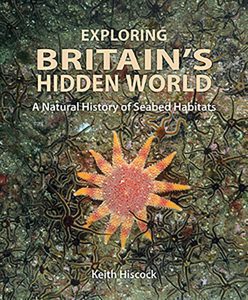 Now, with the stated aim of keeping technical terminology to a minimum, Dr Hiscock has combined his interests in marine biology, diving and photography to collect in a single volume, Exploring Britain’s Hidden World: A Natural History of Seabed Habitats, a wealth of lavishly illustrated information about Britain’s seabeds, and what lives on and in them.

The book is, he says, the culmination of his 50 years of research dedicated to better understanding of where different subtidal seabed habitats occur, and how their associated marine life has come to exist. It draws on knowledge obtained over centuries by many naturalists, scientists and divers – and for UK divers it offers a solid foundation for understanding the natural world under water.