On the small Caribbean island of Bonaire, life is taken at a slow pace. This is a location in which you can relax and dive with a clear conscience, says MORTEN BJORN LARSEN 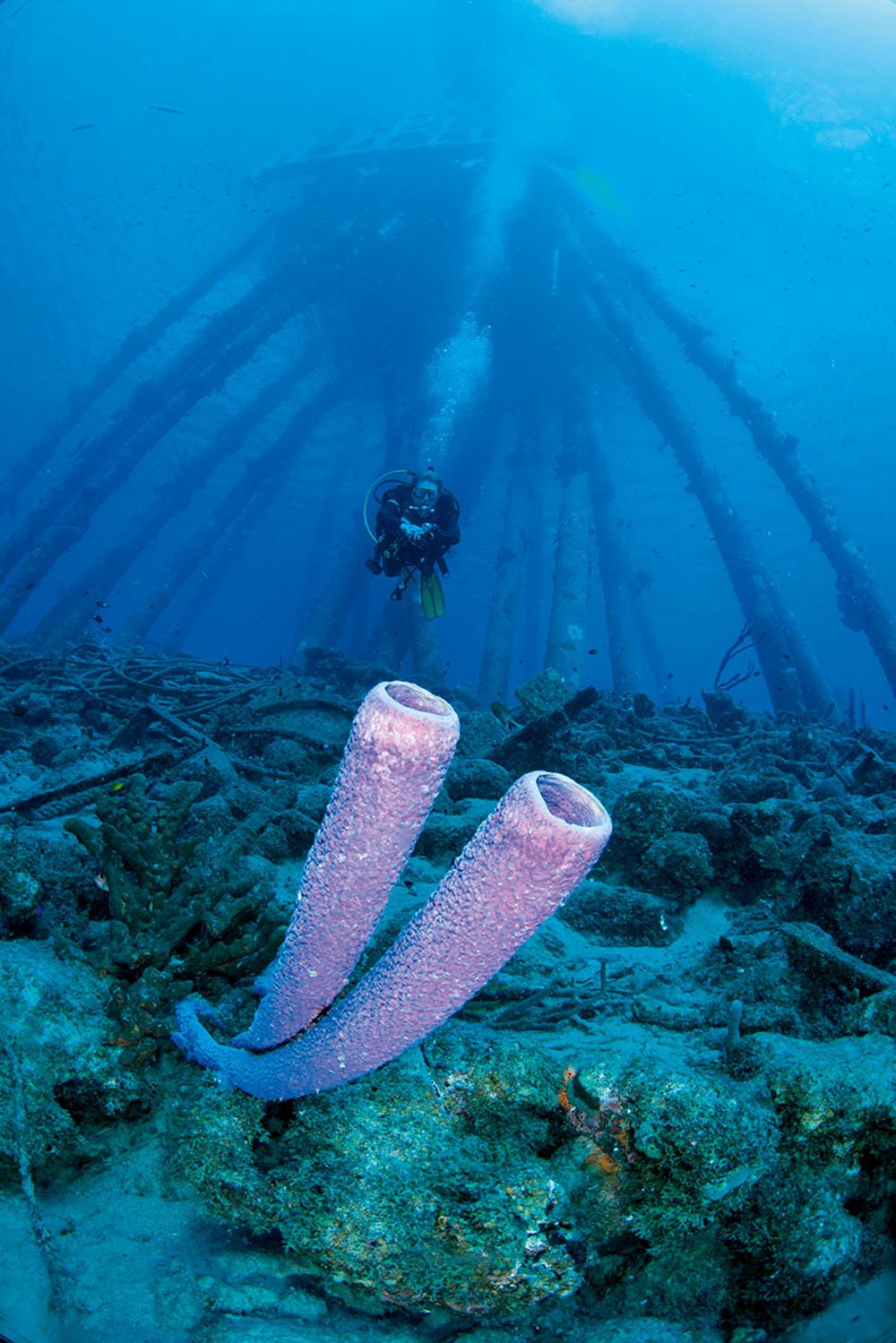 There is plenty of life around the pillars of Salt Pier.

BONAIRE, COVERING ABOUT 110sq miles and located 50 miles off Venezuela, has a population of around 11,000, many people living in its biggest town, Kralendijk.

The island is a special municipality of the Netherlands, and one of the elements that makes it a special place for divers is the easy access to more than 60 dive-spots around the island.

There are two ways to reach these sites. One is via traditional boat-dives; the other (and probably the most fun) is to drive around in pick-ups loaded with tanks and dive-gear.

We were staying at the Buddy Dive resort, which has a drive-through system whereby you park your truck at a filling station, unload the empty tanks and, in almost the same movement, load up new, full ones.

Then you head off again, either north or south according to your plans. All the sites are marked with a yellow-painted stone bearing the name of the site.

It’s simple, uncomplicated and comfortable, and while driving around you come across amazing natural areas such as salt-pans where wild flamingos can be seen.

Extracted from the Atlantic, which has plenty, salt is one of the most important sources of income in Bonaire. Salt Pier, several hundred metres long and supported by many pillars, is used to carry the mineral from a factory out towards the carriers.

Start your dive there on the beach, and you’ll reach the first pillars in a depth of only 2m.

During our dive, we found plenty of life in the shallow waters, but as the water got deeper we began to see pillars covered in colourful corals.

At the furthermost collection of pillars, in around 18m, schools of fish swirled around them, a treat for a photographer. Slowly I inched closer to get some close-ups, with the pillars serving as a fine background.

The seabed here was full of life too.

I saw anemones with resident cleaner shrimps protected by their tentacles. There were huge orange sponges, beautiful purple tube sponges, lobster and some barracuda hanging out in the big blue, waiting for prey to come by. But the most entrancing sight was the sun-rays finding their way down through the groups of pillars.

As an extra treat, we met three turtles munching on seagrass on our way back in. They didn’t seem bothered by our presence, and as we were at a good depth for a safety stop we stayed for a while, enjoying the last of the dive.

WE WERE STAYING in two-floor apartments at Buddy Dive. The downstairs level had a kitchen and living-room, bath and toilet, while upstairs were two bedrooms and another bath. Beside the dive-centre is a restaurant that served excellent lunch and dinner. Breakfast was from a buffet on two large terraces with spectacular views out over the turquoise ocean.

But most important was the dive-centre, located beneath those two terraces. I have used many dive-centres all over the world, and Buddy Dive belongs with the very best of them. Everything went smoothly during the week I was there, and if I needed anything staff were always there, ready to help.

Buddy Dive has its own reef about five steps from where the gearing-up at the dive-centre takes place. All newly arrived divers are required to do a check-dive to get their weights right.

This procedure is taken very seriously, to prevent any kicking of the corals that surround the island.

One of the reasons I chose to travel to Bonaire is that a coral-conservation programme is run there by five local dive-centres in co-operation with the authorities.

The programme started in 2012, with the centres collaborating with an American coral scientist. Some of the most vulnerable species on Bonaire are staghorns and elkhorns, which grow at the edge of coral reefs, thus protecting the softer, slow-growing species, and these two species have been the focus of the conservationists’ attention.

I found the office of the folks who run the programme just behind the dive-centre, and we arranged that I would join them on a dive to see how they work with the corals. That same evening, there was a presentation about the programme in a local restaurant.

I met the head of the programme, Francesca Virdis, by the dive-centre, and soon noticed that her gear included the kind of stuff not usually seen on dives. She had brought along pliers, pincers, a hammer and a type of glue that, I was told, works under water.

We went for a little swim to look at some Christmas tree-like metal structures. On each branch several small elkhorn corals hung in a tiny string, growing peacefully in their ideal environment in terms of light, current and depth.

When the corals reach a certain size, the tips are gently cut off, and the remaining piece will then grow big again. The tips are placed in the reef so that they can grow in a natural environment, enabling Bonaire’s reefs to be restored much faster than would be the case in natural conditions.

Francesca also showed me a vast area replete with staghorn corals. These don’t grow on vertical structures like the elkhorn, but on metal squares about 30cm high on the sandy seabed.

We moved to another area of shallow water, mostly consisting of stones and sand. Francesca  found a stone that she thought would be good to work with, and began hitting it with the hammer.

Thirty seconds later we were engulfed in a cloud of sand and I could barely see Francesca, though I could hear the hammer banging against the stone.

When she had finally chiselled out a hole deep enough to fit a piece of coral, she went back to the Christmas trees for a lump of elkhorn, and used the underwater glue to secure it to the rock after placing it in the hole.

I had witnessed how a new section of coral reef is planted and primed to slowly grow and help the whole eco-system thrive.

I HADN’T REALLY believed that access to such a well-preserved wreck as the Hilma Hooker could be so easy, but it was.

After a short swim from the beach over a pristine patch of white sand, the reef began and, just at the edge of it, the water deepened suddenly towards the next plateau. Then we were hovering over white sand at a depth of 30m where, at the foot of the reef, the wreck lay on its starboard side.

The Hilma Hooker was built in the Netherlands in 1951, originally named the Midlands.

Over the next decade, she changed owners and names several times. In 1975, as the William Express, she experienced such severe problems off San Andres in Colombia that she sank.

However, she was quickly salvaged, bought by a new company and named Anna C. It was in 1979 that she became Hilma Hooker, but five years on some serious technical problems required her to be towed into Kralendijk harbour.

The crew had a hard time finding the necessary documentation for their cargo, and the suspicious authorities launched an investigation.

It turned out that both Interpol and the FBI had been tracking the vessel for months, believing that she was being used to smuggle illegal drugs. Removal of a newly built bulkhead revealed 11 tonnes of marijuana.

With a lawsuit pending, the vessel’s Colombian owners worked hard to deny all responsibility for the cargo.

As the judicial process dragged on, the Hilma Hooker was gradually taking on water, and the dive-centres, lacking a wreck-dive to attract customers, were taking notice.

Eventually the authorities agreed with the harbourmaster and the dive-centres to tow the boat out of the harbour to a dive-site called Angel City.

She had been at the new spot only for five days when her pumps stopped working and she suddenly began to sink. Pure coincidence, or did she get a little help?

It’s still a mystery, but from that day in 1984 the Hilma Hooker has been drawing divers’ attention.

The dive offers easy penetration for those with the right training and experience, but from the outside the wreck is an impressive sight, and we enjoyed seeing the propeller, the steering-house and the view of the stern in visibility of around 30m.

There was no current and a 31% nitrox mix allowed us plenty of time to explore the wreck from the seabed up.

DON’T MISS THE CHANCE of a night dive on the Buddy house reef. We saw lobsters, a beautiful colour-changing octopus and many other creatures we wouldn’t necessarily expect to see in the day-time, but the big attractions were the tarpon, large, predatory fish that can be as much as 1.5m long. Being very silvery, they’re hard to miss when your torch-beam falls on them in the darkness.

We had swum around for a good 10 minutes before the first tarpon came by – then a second and a third one. They use divers’ beams for hunting, which means that it’s possible to manoeuvre them about on the reef. They stayed quite close to us, so we had good fun watching them on the prowl.

Bonaire dive-boats are quite traditional, and provide the opportunity to reach certain dive-sites that are not accessible by road.

For example, we dived a spot named Rappelle, so named because the only other way to access the water would be to rappel down the vertical cliffs above it.

Those cliffs continued down and sheer beneath the surface, covered in coral growth that looked untouched and healthy. Our dive-guide had told us that we might see nurse sharks, although they tended to stay well-concealed in cracks and small caverns and had not been seen for a while.

On the way back towards the boat, I was set on trying to spot a nurse shark, so I peered into every little crevice.

Not far from the boat, I spotted something that, with a little imagination, could have been the outline of a shark –  and the closer I got, the clearer it became that I had found not one but two sharks taking a nap in a small cave within which they fitted perfectly.

I quickly signalled to our guide so that he could gather the group, and everybody could get a good look at these two sleeping beauties.

GETTING THERE> Flights with KLM via Amsterdam.

WHEN TO GO> Because Bonaire is situated so close to the Equator, the climate is stable, with an average air temperature of around 30°C and water temperature of 28-29°C. A 3mm full suit or shortie is enough.

PRICES> Caribbean Fun Travel offers a package of seven nights in a Buddy Dive studio apartment with return flights from the UK, unlimited air, vehicle hire (including taxes and CDW cover), airport transfers, taxes and fees for £1495pp. Extra nights, based on the same itinerary, would cost £99pp per night, caribbeanfuntravel.co.uk. A two-tank boat-dive costs US $54.